Atmosphere of Hope is a recent talk in which Australian environmentalist Tim Flannery summarizes the prospects for limiting and reducing atmospheric CO2 levels. Flannery is a new breed of environmentalist who questions the value of climate alarmism.

The upcoming COP21 conference in Paris will be very different from past climate conferences in that participating countries have already committed to specific emission reduction targets. Because these commitments have been made public (see How COP21 commitments stack up) environmentalists can already predict the effect they will have on total CO2 levels.

Thanks to the recent “decoupling” of reduced fossil fuel use and economic growth, Flannery is extremely confident that most governments will keep their commitments. While these targets are inadequate to limit global warming to 2 degrees centigrade (and preserving civilization as we know it), Flannery is extremely confident that new carbon capture technologies will make up the shortfall.

The main argument our political leaders give against reducing fossil fuel consumption is the negative effect on economic growth. Thanks to a big drop in the cost of renewable energy (and a big increase in energy efficiency), this argument no longer holds water. Between 2013 and 2014 there was no increase in global fossil fuel consumption (causing an oil glut that dropped prices to $40 a barrel). Yet the global economy continued to grow, thanks to the substitution of cheap renewable energy for fossil fuels.

Flannery also believes that “wavy energy” technology also played a big role in this decoupling. “Wavy energy” refers to a distributed grid technology (developed in Germany) that compensates for the intermittent nature of solar and wind energy – at any given moment some place in Germany is generating some form of renewable energy.

The Role of Carbon Capture Technologies

For me the most interesting part of the talk was the discussion of all the new carbon capture technologies being developed. Flannery divides geoengineering technologies into two categories. The first, which he refers to as “second way, “involves blocking sunlight by injecting sulfur based chemicals into the stratosphere. In his view, this is highly dangerous due to the risk of climate rebound effects (to say nothing of the health effects of the chemicals).

In contrast, “third way geoengineering” technologies remove CO2 from the atmosphere and sequester it. There are further subdivided into biological (natural) and chemical (industrial) based technologies. The latter require external energy input, which means they only reduce CO2 concentrations if they employ renewable energy.

Examples of biological third way technologies include
• Reforestation
• Biochar (charcoal produced from plant matter and stored in the soil as a means of removing carbon dioxide from the atmosphere)
• Wood waste based plastics
• Carbon farming – Australia rewards farmers for replacing annual grasses and crops with perennial varieties that store carbon.

Examples of chemical third way technologies include
• Carbon negative concrete which absorbs CO2 over its lifetime
• Crushed serpentinites – minerals that capture CO2 as they weather and can be used for beaches, playgrounds, smoke stacks and carbon negative roof paint.
• CO2 based plastics
• CO2 based carbon fiber (used in the Boeing dream liner and carbon fiber cars) – would be cheaper than current carbon fiber, aluminum or steal
• A South Korean technology that employs used coffee grounds to capture methane.
• Chiller boxes in Antarctica – powered by wind energy, they would cause CO2 to solidify and fall as snow and then bury it under regular snow. 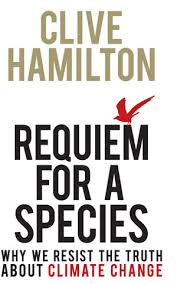 Requiem for a Species: Why We Resist the Truth About Climate Change

Most of Requiem for a Species is a detailed analysis of the sociological and psychological factors that lead all of us (including climate activists) to deny the grim reality of the massive climate disruption that faces us. Australian author Clive Hamilton begins by confronting readers with the most likely climate scenario over coming decades. I have always had difficulty getting my head around climate science and found these the most valuable chapters.

Predicting the Behavior of Politicians

For the last two decades politicians have been giving lip service to limiting global warming to a “safe” increase of 2 degrees centigrade. According to Hamilton, most climate scientists recognized this was no longer possible when the 2009 Copenhagen Climate Change Conference failed to agree on a treaty to replace the Kyoto Accord. Most climate models agree that the only way to limit global warming to 2 degrees Centigrade would require for global emissions to peak in 2015 (this year) and decrease by 20-40% by 2020. This translates into a 6-7% per year reduction in rich countries – it assumes that developing countries (including China, India and Brazil) will continue business as usual until 2030, before reducing their emission by 3% a year. Hamilton believes there’s no way developing countries will agree to sacrifice economic growth (and bringing their populations out of poverty) before then.

Already in 2010, Hamilton was predicting that rich countries wouldn’t start cutting their emissions by 6-7% annually in 2015. He reckons 3% per annum is the highest emissions reduction compatible with continued economic growth. Cuts above 5% would likely translate into unspeakable human misery, witness the immense human cost in Russia when the Soviet economy collapsed in 1989 (which caused a 5.6% reduction in carbon emissions).

He feels politicians are very unlikely to agree to start cutting in emissions in 2020, either. At present most OECD countries have committed to reducing carbon emissions by 60-80% by 2050. Such a distant target is worse than useless. If politicians fail to act before 2030-2040, most of the earth’s ice cover will have melted and will remain that way for thousands of years. If politicians continue business as usual (and do nothing), global temperatures will increase by 3.1 degrees C by 2100 and 5-6 degrees C by 2200.

Hamilton believes the best we can hope for is that both rich and developing countries will begin cutting emissions by 3% per year in 2030.* In the absolute best case scenario, this translates into an increased average global temperature of 2.6 degrees C by 2100 and 3.5 degrees C by 2200.

Because Hamilton considers a 4 degree C increase a likely scenario, he provides a detailed description of what that looks like. With 4 degrees C of average global warming, there will be no Arctic sea ice in summer, and Greenland, the west continental shelf of Antarctica and the Himalayan glaciers will melt. If all the earth’s ice cover melts sea levels will rise by 70 meters.

More than a billion of Earth’s inhabitants will have no access to water, especially in the India, Pakistan and China which rely on the Himalayan glaciers for drinking water. Fifteen percent of current arable land will be unsuitable for cultivation due to drought (in India, Pakistan, China, Australia, southern Europe, the central and southern US, North Africa and the Amazon). In northern climates like Canada and Siberia, there will be a 20% increase in arable land.

It’s impossible for climate scientists to predict exactly how many people will die from starvation, dehydration and extreme weather events. Some predict a reduction in the global population to one billion or less. All we know for sure is the die-off will be most severe in poor developing countries.

There’s also an excellent chapter on the climate denial movement, which profiles climate scientists (most were also strong advocates of Reagan’s Strategic Defense initiative and nuclear power) who colluded with fossil fuel industry, right wing think tanks and the public relations firm APCO (which master minded the campaign to deny the health risks of tobacco) to create an extremely slick climate denial campaign. I found it especially intriguing to learn of the role of the Revolutionary Communist Party (who produced the 2007 documentary The Great Global Warming Swindle) and other far left groups in the climate denial movement.

There’s also an excellent chapter on the gungho technofixers who believe catastrophic climate change can be prevented through pie-in-the-sky technofixes, such as carbon capture, geoengineering and wide scale adoption of nuclear power. Hamilton explores each of these technologies in considerable detail. Each of them costs far more than improving energy efficiency and switching to renewable energy. All of these approaches would take at least ten to twenty years to implement. And as Hamilton points out, waiting another 20 years to begin cutting emissions will have catastrophic consequences.

Hamilton also makes the prediction that the global recession might temporarily reduce emissions before the economy rebounds again. He was correct:

*Hamilton was overly pessimistic here. In November, Obama and Xi Jinping made a bilateral agreement in which Obama committed the US to cutting its carbon emissions by 26-28% from 2005 levels by 2025. China committed to start cutting emissions in 2030 and make “best efforts” to peak emissions before 2030.

**The Revolutionary Communist Party was always regarded skeptically (as heavily infiltrated) by other progressive groups when I lived in Seattle. For a grassroots leftist group, they seemed to have virtually unlimited funds and repeatedly tried to instigate violence during peaceful protests. An RCP member was linked to the suspicious death of a one of my African American patients who exposed the DEA’s role in laundering cocaine profits in the professional race car circuit.