The Moral Landscape: How Science Can Determine Human Values

The historical record indicates religion has been pretty hopeless in guiding human beings in leading moral and ethical lives. The Moral Landscape outlines a proposed morality based on objective scientific principles.

Sam Harris, a PhD neurophysiologist, bases this proposed morality on the principle of maximizing human well being. Because human well being is a function of world events and states of the human brain, there must be some truths about morality that can be scientifically verified. Harris maintains that a more detailed understanding of these truths would greatly improve the quality of human life.

For example, he asks whether corporal punishment of children, female genital mutilation and honor killings* are beneficial to human well being. There must be an answer to these questions (which can be established by research), even if we don’t know, at present, what it is.

The book is highly critical of the “cultural relativism” advocated by secular liberals and many US scientists when they insist there are no objective answers to the moral questions Harris poses. He believes this attitude leaves secular societies at the mercy of fundamentalist religion. Harris (an avowed atheist) also argues that obedience to God creates a morality that is more concerned with a theoretical afterlife than human well being in this lifetime.

The development of a science-based morality would have to weigh the ultimate well being of the individual vs the general well being of the society. It would also be open to controversy and dissenting viewpoints, like all scientific disciplines.

Harris’s chapter on religion describes how Freud, Marx and other prominent nineteenth century intellectuals believed the world religions would disappear with the scientific advances that enabled the industrial revolution. With the exception of the US, their predictions proved correct: most developed societies are predominantly secular.

At present most societies become more secular as they become more prosperous stable and democratic (in New Zealand, only 10% of the population attends church). Moreover the least religious countries (Scandinavia and the Netherlands) have the best societal health. Research shows that loneliness, helplessness and poverty are poorly conducive to happiness and moral behavior.

At present fundamentalism is limited to the US and developing countries. Harris believes that high levels of inequality have caused America to take a different path than other developed countries. Extreme poverty in many areas of the US is linked to low levels of educational achievement, superstitiousness, excessive religiosity and racism. 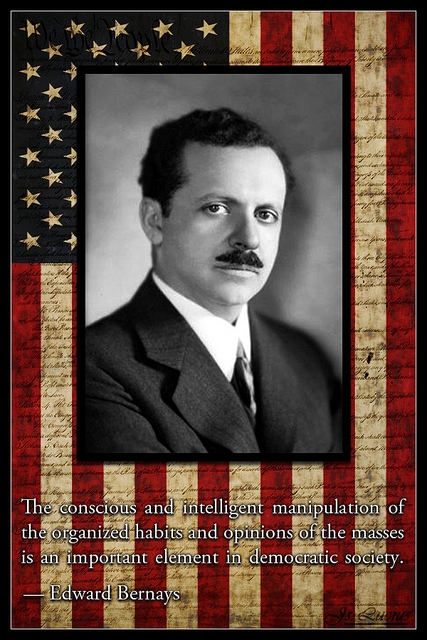 The Century of the Self is a four-part BBC documentary that delves deeply into the life and work of Sigmund Freud’s nephew Edward Bernays. Bernays was the first to perfect the science of thought control. In the political sphere, he referred to mass psychological manipulation as “engineering consent.” When he used propaganda and psychological manipulation to sell corporate products, he called it “public relations.” Parts 1 and 2 focus on the Freudian theories underpinning the early public relations movement.

The Century of the Self

The Transformation from Citizen to Consumer

The twentieth century is frequently referred to as the selfish century. This documentary lays the blame for this at the feet of Sigmund Freud and his nephew Edward Bernays.

Prior to World War I politicians and businesses used facts and information to win votes or to persuade people to buy their products. When Woodrow Wilson hired him to run his Committee for Public Information to produce pro-World War I propaganda, Bernays incorporated Sigmund Freud’s theory that human behavior was based on unconscious instinctual drives. By appealing to these unconscious and irrational feelings, he succeeded in selling World War I to a profoundly isolationist American public

As well as his pivotal role in engineering corporate and government propaganda, Bernays was also responsible for popularizing Sigmund Freud’s work by emphasizing its sexual content.

The Shift from a Needs to a Desire Based Culture

Curious whether similar techniques would also work in peace time, Bernays hired himself out to corporations to help them improve their sale of consumer products. His goal was to shift US society from a needs culture, where people only bought what they needed, to a desire culture, where they purchased products to make them feel better. Aware that the word propaganda had an extremely negative connotation, Bernays coined the term “public relations.”

Bernay’s stunning success gave birth to 1920s “consumptionism” and was largely responsible for the economic bubble that resulted in the 1929 crash. Already by 1927, social critics were concerned that Americans were no longer citizens but consumers. Confident of their ability to engineer consumer demand, banks funded national expansion of department store chains and hired Bernays to persuade ordinary people to borrow money to buy shares in the stock market.

During the Great Depression, Bernays shifted gears to focus more on influencing public political views. Neither Freud nor Bernays believed in the equality of man. Frightened by the rise of fascism in Europe, both believed that democracy was a fundamentally unsafe form of government (due to human beings’ dangerous unconscious drives).

Both believed that people must be controlled – that mass democracy could only work if popular consent was engineered. Bernays was also convinced that the best way to control people in a mass democracy was to render them passive consumers – by triggering a continuous irrational desire to consume and satisfying it with consumer goods.

Roosevelt Tries to Rein in Business

Unlike Freud and Bernays, Franklin Roosevelt believed that people were capable of knowing what they wanted and relied on the new science of public opinion polling (pioneered by George Gallup) to ascertain what people were thinking. His response to the Great Depression was to grant himself extensive executive power and subject business to central economic planning, which they hated.

In 1936, the National Association of Manufacturers hired Bernays to initiate an ideological campaign against the New Deal (and the rise of unionism as Alex Carey mentions in Taking the Risk Out of Democracy.

When World War II ended, the CIA hired Bernays to advise them on how to control the “irrational aggression” of the masses. In his CIA role, Bernays devised a campaign for the Eisenhower administration to convince the American public they were under imminent threat from Soviet Communism.

As part of this campaign, Bernays mobilized public and congressional support for the 1954 coup against Guatemala’s democratically elected president Jacobo Arbenz. Bernays also worked for the United Fruit Company, which was concerned about Arbenz’s plans for land reform, i.e. breaking up their extensive Guatemalan banana plantations.