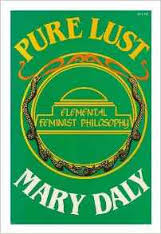 Pure Lust* is about the systematic psychological indoctrination of women that occurs under patriarchy.

Daly’s approach to her subject is both historical and etymological. Historically organized religion has assumed primary responsibility for indoctrinating women. Daly focuses mainly on the Catholic religion, particularly the cult of the Virgin Mary and how this doctrine was used to trap women in subservient roles. After identifying clear parallels in the Jewish and Muslim religion, she examines how judges, lawyers and other male-oriented institutional roles have replaced priests in modern secular society.

The book has a heavy etymological focus, with an exhaustive examination of ways in which women’s oppression is embedded deeply in contemporary culture and language. Women who wish to fully liberate themselves must learn to recognize how language itself oppresses us and, where necessary, invent our own (as Daly does throughout most of the book).

Daly maintains this indoctrination has caused women to become separated from our “elemental race,” which is rooted in harmony with the natural world. Many women sense this – that they have been blocked of their capacity to conceive, speak and act in their own original words. They simultaneously sense their energy is being systematically drained for male use.

According to Daly, the lot of women under patriarchy has been the sacrifice of their personal needs and ambitions for children, husbands, aged parents and “just about everyone else.” This is especially true of poor and minority women.

The Origin of War, Racism and the Rape of the Environment

Simultaneously, unbridled male sexual aggression (a condition based on an obsession with impotence that Daly refers to as “phallic lust”) translates into war, racism, imposed poverty and famine, the rape of the environment and the insidious spread of the drab ugliness of a man made environment that systematically deadens minds.

Within male-dominated “sadosociety,” women aren’t allowed a self – all their experiences must be mediated by men. Daly views the modern commercial building – consisting of square, flat spaces with rigidly uniform decor, hermetically sealed windows, homogenized sound environment and constant light – as the perfect archetype of this mediated environment. The end result is a state of chronic sensory deprivation.

Under patriarchy everything women hear, touch, feel and understand about the world has been processed for us. We live in a society dominated by the mass production of “potted” (ie artificial) desires and emotions. The result is the killing of consciousness and integrity in many women, allowing the routine abuse of the poor, minorities, and so-called enemies to go unnoticed and uncriticized.

*The title Pure Lust refers to “elemental female lust,” which Daly defines as women’s intense longing for the “cosmic concrescence that is creation.”