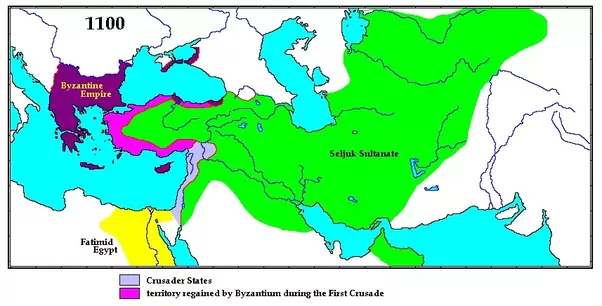 Episode 19: Islam and the Caliphates

In this lecture, Harl focuses mainly on the battle for control of the Muslim caliphate following the birth of Islam in the 7th century AD.

The key dates he cites are

622 AD – the prophet Muhammad migrates to Medina from Mecca owing to conflict with Mecca elites.

632 AD – Muhammad dies after returning to Mecca with his followers.

641 AD – Muslim armies conquer Egypt (where they are welcomed after seven centuries of oppressive Roman rule).

656 AD – Arab army mutinies in Egypt (over lack of pay), marches back to Medina and kills the reigning caliph Uthman, who they replace with Ali, a Shia [2] cousin of Muhammad. A civil war ensures, with the Sunni Ummayad caliphate eventually assuming power  and establishing Damascus as their capitol.

700 AD The Sunni Ummayad faces serious military (suffering defeat in their efforts to conquer Constantinople, the Khazars and the Turks in Transoxiana [3], political and fiscal challenges. Muslim soldiers (many of whom are nomad mercenaries) garrisoned in the steppes cities become increasingly independent and “rapacious.”

711 AD – Muslim armies cross into Iberian peninsular, smash the Visigoth kingdom and overrun most of Spain.

749 AD – Umayyad caliphate overthrown by a mixed army (many of whom identify as Shia) of Arab tribal regiments and Persian converts. Replaced by Abbasid caliphate (descended from Muhammad’s uncle), who move capitol to Baghdad. [4]

809 AD – New civil war results from the conflict between the brothers al-Amin and al-Ma’mun over the Abbasid Caliphate succession.

909 AD – organized Berbers sweep across North Africa to occupy Egypt where they set up a Fatima (Shia) caliphate which, in alliance with the Byzantine Empire, takes over Baghdad and much of the Levant, as well as the holy cities on the Arabian peninsula.

945 AD – Seljiud Turks who have converted to Islam invade from the East and restore power in Baghdad to the Abbassid caliphs.

[1] The Levant refers to a large ancient historical area on the eastern shores of the Mediterranean.

[2] Shia Islam, the second largest branch of the religion, holds that Muhammad designated his cousin Ali as his successor.

[3] Transoxiana is the Roman name for the central steppes region roughly corresponding to Uzbekistan, Tajikistan and southern Kazakhstan and Kyrgyzstan.

[4] According to Harl, this move cements the caliphate in the Persian (Sassanid) cultural world and turns the empire from an Arab empire to a multi-ethnic Muslim empire. Ultimately 34 of the 37 Abbassid caliphs were sons of non-Arab Persian slaves.