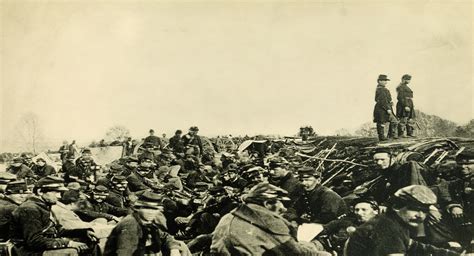 Episode 16: The End of War and of Slavery

Rather than describing specific battles, Ayers limits this lecture to a brief overview of the Civil War, beginning with the stalemate reached by 1862. By this point, Union ships controlled the entire coast along the periphery of the Confederacy. The latter, in turn, still controlled nearly all South’s productive farmland.

As the North pushed into Confederate territory, slaves fled their plantations to seek Union Army protection. Some Union officers returned slaves to their owners while others retained them as guides in unfamiliar Confederate territory. In August 1861, Congress passed a law classifying slaves crossing Union lines as “contraband of war” and banning their return to their owners. Instead they were housed in overcrowded, hastily constructed “contraband” camps, where they experienced tragically high mortality rates.

In mid 1862 Lincoln pushed a law through Congress authorizing Union generals to confiscate or destroy southern plantations as. He also issued the Emancipation Proclamation, an Executive Order that took effect on January 1, 1863 that freed all slaves in Confederate states.

The Civil War is still the most costly US war ever, in terms of lives lost. The North lost 365,000 men to wounds and disease and the South (with a smaller population) 260,000. 37,000 Black men serving in the Union army died, and 10,000 Black men, women and children died in contraband camps.

By the end of the war, the southern economy was virtually destroyed, with many cities reduced to rabble, and many acres of farmland abandoned. In contrast, the northern economy was growing robustly with Lincoln’s greenbacks* spurring rapid expansion in business investment and manufacturing.

Congress passed the 13th Amendment (banning slavery in the US) in January 1865, though the war wouldn’t end until May. It would be ratified by 27 of the required 36 states by December.

With the formal status of former slaves uncertain, some former slave owners fled to Latin America, some chained them up to keep them from leaving and others let slaves continued to live in their cabins and work for wages or for a share of crops they produced.

The Freedmen’s Bureau, formed in March 1865 as a US government agency, dispensed free medicine, food and clothing to poor whites and blacks. It also created courts to settle disputes between landowners and former slaves, drew up contracts, and set up public schools.

Southern Blacks themselves were politically divided. More wealthy black teachers, ministers and artisans merely sought equality before the law and the right to vote. In contrast impoverished former slaves were mainly interested in acquiring their own land.

As Congress was in recess (until December 1865) when Vice-president Andrew Johnson assumed the presidency (following Lincoln’s assassination in April 1865) they had virtually no influence over his policies. Under the so-called Presidential Reconstruction program he launched he granted amnesty to former Confederate leaders who signed a loyalty oath, protecting them from seizure of their property and prosecution for treason. He made no provision for Blacks to vote and refused to intervene when former Confederate states enacted Black Codes restricting the rights of former slaves. While allowing them to marry, own (non-real estate) property and sue and be sued, these laws forbade them to change jobs, own or rent land, testify in court or practice certain occupations.

*Greenbacks were emergency paper currency Lincoln issued during the Civil War when both US and European banks refused to grant his government loans at a reasonable rate of interest. 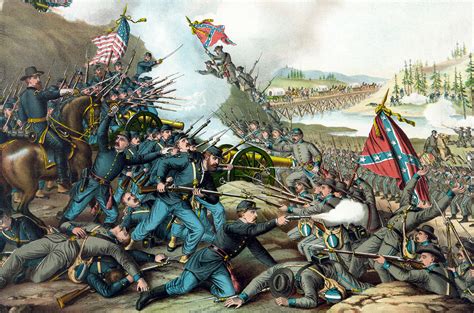 Did Slavery Really Cause the Civil War?

This lecture is the eighth in the Kanopy American History course The Skeptic’s Guide to American History. My initial reaction is that Stoler probably isn’t nearly skeptical enough. The South, which still refers to the Civil War as the War Between the States, sees states rights as the primary cause of the war.

Unfortunately Stoler doesn’t really resolve this controversy. However he rightly points out that the immediate cause for Lincoln’s declaration of war was not to end slavery, but to “preserve the union.”

Stoler begins by talking about the collapse of the Whig Party in the 1850s following the passage of the deeply unpopular Kansas-Nebraska Act. This law, which created the states of Kansas and Nebraska. deferred the decision to the states whether to allow slavery or not. From the 1850s on, the newly created Republican Party, which committed to end slavery everywhere, would be America’s second major party.

Although Lincoln, a Republican, only received 39.8% of the popular vote in 1860, his strong support in northern states mean he won a majority of the electoral college. Lincoln campaigned on a platform of allowing slavery to continue in states where it was legal but preventing its spread to western states as they joined the Union.

Stoler also reminds us that Lincoln’s Emancipation Proclamation (freeing slaves in the states that had seceded) didn’t take effect until January 1883 and didn’t free slaves in any of the Union states.*

Stoler denies that conflict over states rights caused the war, arguing that various Northern states also lobbied for for states rights at different times (eg when they opposed the war the US launched against Mexico in 1846). I fail to see the logic of this argument. Just because the North agitates strongly for states rights over specific issues doesn’t mean the South can’t do so as well.

He also denies that a profound difference in their respective economies (with the South being primarily agrarian and the North being mainly industrial) was the root cause of the war. He argues this difference had been present since colonial times without leading to war.

He also poo-poos the distinct difference their respective cultures (with the South possessing an aristocratic planter class not present in the North) as the main cause of war. Here he points out that the North was just as racist as the South and hardly more democratic for the average worker.

*In Stoler’s view, Lincoln’s main goal with the Emancipation Proclamation was to buoy up Northern support for the war, despite massive numbers of casualties, and to open the Union army to extremely motivated ex-slaves. In his next lecture he also identifies dissuading the UK (where the population strongly opposed slavery) from entering the Civil War on the Southern side as a primary motivation.

The series can be viewed free on Kanopy.

War is a Lie

In War is a Lie, author David Swanson presents extensive historical evidence that the US has never been a democratic republic – that this is a carefully crafted fairy tale the ruling elite has been telling us since the late 18th century. He also demolishes the myth that warfare is deeply ingrained in human nature. Ninety-eight percent of people are deeply opposed to killing and warfare and require extensive brainwashing to commit to either. Although the species homo sapiens is 60,000 – 1000,000 years old, they have only engaged in war for the last 10,000 years. Many human civilizations (including the people of the Arctic, Northeast Mexico, Australia and Nevada’s Great Basin) had no experience of war prior to contact with Europeans. Among the more astonishing facts Swanson reveals is that 80% of the US troops drafted into World War II declined to kill enemy troops.

Starting with the Revolutionary War, War is a Lie is full of delightful little factoids that are omitted from high school and college US history courses.

Among the high points:

The two real goals of the US War of Independence were to 1) remove the King’s representatives from positions of power in North America and replace them with colonial merchants and bankers and 2) to overturn the British ban on western expansion (via the slaughter of indigenous tribes). The Continental Army consisted mainly of poor farmers who were forcibly conscripted, brutally mistreated and rarely paid (even though General Washington was the richest man in the colonies. During and after the war, numerous “democratic reforms” were enacted to motivate these the “recruits, with all being promptly nullified.

Contrary to what we’re taught in school, the US started the War of 1812, with the intention of invading and occupying Canada. They lost this war.

Another war about western expansion that resulted in the US annexation of Texas, California, Utah, New Mexico, Arizona, Nevada and parts of Colorado and Oregon. Many Irish and other European immigrants fought for Mexico.

Swanson maintains the Civil War was also about western expansion and whether the North or South would control the new western territories. Swanson stresses that Lincoln could have easily freed the slaves without launching a war (other countries did so). The Emancipation Proclamation was issued well after the war started, as public sentiment turned against the war due to high casualties. Swanson reminds us that the Proclamation only applied to states that had seceded – slavery remained legal in Union states.

Swanson details the deliberate Wall Street strategy of arming Hitler to neutralize the Soviets, highlighting orders US pilots received not to bomb German munitions factories owned by Americans. He also writes at length about the Nazi eugenics experiments that originating in the US under the guidance of Rockefeller, Carnegie and Harrison. I was intrigued to learne the Rockefeller Foundation funded Josef Mengele’s experiments on Jewish prisoners. Swanson attributes Roosevelt’s eagerness to enter World War II to increasing working class militancy in the US (which the compulsory draft ended) and fears of full blown insurrection. He also discusses numerous efforts Hitler made (as late as 1940) to negotiate a peace settlement with the allies – which they rebuffed.