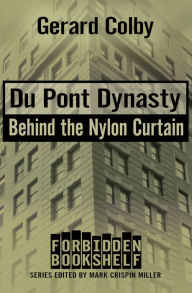 DuPont Dynasty: Behind the Iron Curtain

If you want a precise understanding of how a major corporation sets out (and succeeds) in corrupting all aspects of democratic government, Behind the Nylon Curtain is for you. If it doesn’t convince you that democracy is impossible in a capitalist economy, I don’t know what will. This 800+ page book traces every bribery and corruption scandal; every flagrant violation of labor, environmental and trading with the enemy laws; every frivolous lawsuit (eg challenging the EPA’s ability to regulate air and water pollution); every instance of war profiteering and gouging the US taxpayer; and every case of electoral fraud the DuPont company has engaged in their 215-year history.

In addition, Colby details the prominent role DuPont played in the formation of the American Liberty League and the 1934 fascist coup the group plotted to remove Roosevelt from the residency; in re-arming the Third Reich prior to World War II; in arming private vigilante groups to attack union organizers and strikers; and in secretly building the nuclear facilities supplying uranium and plutonium to the Manhattan Project. In the mid-seventies (when DuPont workers and Delaware residents began dying of cancer in unprecedented numbers), they successfully blocked a bill to require safety testing on all new chemicals before they could be marketed.

Colby also enumerates numerous efforts by Congress, unions and consumer advocates like Ralph Nader to challenge DuPont’s overtly criminal behavior. Owing to the company’s long time control over local and national media, the Delaware State government and the executive, legislative and judicial branch of the federal government, it has been virtually impossible to sanction DuPont for their illegal activities.

How DuPont Came to Own Delaware

Historically the DuPonts have totally controlled Delaware (government, newspapers, radio, TV, colleges and newspapers).  Thanks to DuPont, Delaware has the lowest business tax in the country and the lowest cost of incorporation. It’s also the only state allowing Delaware corporations to hold out-of-state stockholder and board meetings. The majority of Americans largest corporations are incorporated in Delaware.  In 1980 governor Pierre DuPont successful introduced a law enabling Delaware banks to circumvent other states’ usury laws by setting credit card interest rates that are binding on out-of-sate residents. (see How Banks Use Credit Cards to Rip Us Off )

I found Colby’s revelations about Franklin D Roosevelt – a significant departure from the pro-labor image promoted by the Democratic Party – the most illuminating. Prior to reading this book I had no idea that Roosevelt

*DuPont also blocked distribution of this book for 40 years. Although initially published by Prentice Hall in 1974, DuPont fought Colby in the courts for 30 years to block its distribution (Colby describes his legal ordeal in the introduction). In 2014, he finally released the 1984 edition as an ebook. Although Prentice Hall still owns the print rights, the author retains electronic rights. Used print editions are available from Amazon. The Kindle edition is $9.99.