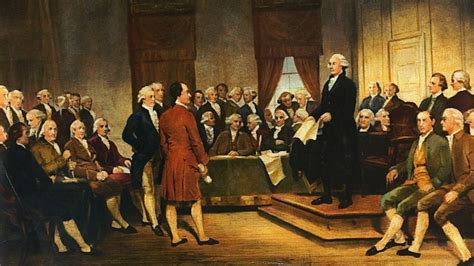 Ayers begins this lecture by pointing the overall difficulty of persuading settlers (in the 13 American colonies) to fight a war of independence when when they all identified more with Britain than with each other. A chief purpose of the Declaration of Independence Thomas Jefferson wrote was to create solidarity between the colonies by promoting a unifying dream of “equality.”

Jefferson’s first draft of the Declaration blames the British monarch for the slave trade and slavery (which it calls a “cruel war against human nature,” an “execrable commerce” and an “assemblage of horrors.” The Continental Congress subsequently deleted this language.

During the Revolutionary War, pro-independence forces capitalized on the fact that the British recruited slaves and Native Americans to their side to mobilize racist animosity against both groups. The British used slaves and Native Americans to help forage for food and serve as scouts and spies. In addition slaves also drove teams of oxen, cooked for British troops and piloted British boats.

Some historians believe African and Native Americans would have been better off had America remained British, in part because the Revolutionary War cut the continent off from Europe’s growing abolition movement. Slavery definitely would have ended in Virginia, where Governor Dunsmore had granted freedom to all indentured servants and slaves in 1775.** According to Ayers, US independence greatly facilitated the spread of slavery to new territories.***

Ayers moves on to discuss the framing of the US Constitution. Here the main debate was between the Federalists, led by James Madison, who favored a strong federal government; and the Anti-Federalists, led by Patrick Henry, who wished states to hold the balance of power. There were Southern slaveholders on both sides of this debate, but the richest, most powerful slaveholders favored a strong central government.

To win support from this faction, the original Constitution postpones any legal effort to end slavery for 20 years, as well as granting southern states the right to count each slave as a 3/5 person in assigning congressional representatives.

Although the Constitution prohibits federal initiatives to end slavery in the first 13 states, in 1784, Congressman Thomas Jefferson introduced a bill to ban slavery in all new western states (including Alabama and Mississippi). Although it lost by one vote, in 1787 he successfully incorporated a ban on slavery in the legislation creating the Northwest Territories.

The constitutional ban didn’t stop the legislatures of northern states from ending slavery. Those with the largest number of slaves did so only gradually (with persons born into slavery required to wait until age 25-28 to claim their freedom. By 1810, 3/4 of northern African Americans were free and by 1830, they all were.

Losing much of his anti-slavery fervor as he grew older, Jefferson became a proponent of scientific racism. The latter asserts that black-skinned people are inferior to those with white skin. He had six children by one of his slaves, a biracial woman named Sally Hemings, starting when she was 15. Jefferson granted all his slaves (including his slave children) their freedom at his death. The state of Virginia had legalized the private manumission**** of slaves in 1792.

*Ayers finds this ironic as it was mainly the institution of slavery that made the American colonies wealthy enough to attempt independence.

**By 1775, tobacco had depleted much of the Virginia colony’s soil, leading many local farmers (including George Washington) to turn to wheat instead. Wheat was not nearly as labor intensive as tobacco which meant Virginian slaves often had nothing to do.

***The British had banned slavery west of the Appalachians.

****Manumission refers to an official act whereby a slaveowner grants a slave their freedom.