The fourth film in a series, Plutocracy IV essentially rewrites “mainstream” history about the birth of the US labor movement. In director Scott Noble’s depiction, what we see is virtual all out war between working people and corporate bosses and their government stooges.

Noble begins by tracing the downfall of the global anarchist movement, beginning with the violent crushing of the anarchist-driven 1871 Paris Commune.

In 1919, two-thirds of Socialist Party members voted to support the Bolshevik Revolution and were expelled by the party leadership, who favored democratic socialism. From that point on, the Communist Party (and fascism in Germany and Italy) drove most radical worker organizing.

Noble describes 1921-1928 as extremely bleak for the labor movement – with most strikes being defeated during this period. Noble highlights the 1921 Battle of Blair Mountain, where striking West Virginia coal miners were attacked by federal troops and the 1923 St Pedro longshoremen strike (California), which was crushed by police and vigilante Ku Klux Klan members.*

It was also during this period that the Supreme Court overturned federal child labor and minimum wage laws.

Things got even worse for US workers during the Great Depression, with corporate bosses using the fear of unemployment to reduce wages by 20%. In 1932, Hoover ordered federal troops to mow down the Bonus Army, World War I veterans and their families, when they camped out in front of the Capitol demanding payment of the Bonus they had been promised  (see The Wall Street Elites Who Financed Hitler)

In 1933, Roosevelt passed the National Industrial Recovery Act, which theoretically gave workers the right to unionize (and strike). Although union membership increased substantially over the next several years, strikes continued to be brutally suppressed by armed corporate thugs, police and state National Guards. One example was the 1933 Ford Hunger Strike (aka the Ford Massacre) – in which 15,000 autoworkers when on strike when Henry Ford began to close factories. Despite being brutally attacked by armed guards and police (with four strikers killed and many injured), strikers persisted and won right to organize Ford Motor Company.

I was very surprised to learn there were four general strikes during 1934 in San Francisco, Minneapolis and Toledo. The San Francisco general strike was defeated by the union leadership (AFL) when Roosevelt condemned it. Workers were victorious in Toledo and Minneapolis, even though the Minnesota governor called out the National Guard in an effort to crush the city’s strike.

The fear that more general strikes would provoke generalized revolt (and/or revolution) led Roosevelt to create the National Labor Relations Board in 1935. His aim was to allow for a “peaceful” process of resolving strikes.

*In one vignette, Native American Historian Roxanne Dunbar-Ortiz describes how Woodrow Wilson and state and local officials supported the rise of the KKK in the north to crush strikes. Many members of the Portland police were KKK members during this period, and Colorado judges, police and elected officials belonged to the Klan in Colorado. 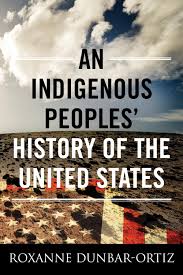 An Indigenous Peoples’ History of the United States

I loved this book. It helped me make sense, finally, of the barbaric viciousness of US military policy. The drone wars, torture, sexual assault, civilian massacres and deliberate targeting of women and children all clearly have their origin in the genocidal wars against Native Americans. There is an unbroken continuity, embedded in the mindset of US military officers, between the so-called Indian Wars and the US invasion and occupation of Mexico, the Philippines, Korea, Vietnam, Afghanistan and Iraq.

An Indigenous Peoples’ History of the United States is a book about total war, also known as “irregular warfare” and “counterinsurgency,” a uniquely American scorched earth form of warfare that was first perfected during the British colonization of Northern Ireland. Ulster Scots-Irish settlers brought it to the New World, migrating in the hundreds of thousands in the early eighteenth century. From the beginning, it was primarily Scots-Irish settlers who illegally squatted on unceded Indigenous lands. These were typically soldier-settlers who killed Indigenous farmers and destroyed their towns. They would become the mainstay of the colonies’ early militia movement, as well as forming the bulk of Washington’s revolutionary army.

Native historian Roxanne Dunbar-Ortiz organizes this book around three broad themes: the US role as a Covenant Nation, the Doctrine of Discovery and the uniquely North American concept of genocidal extermination as a legitimate form of warfare.

The author begins by correcting centuries of lies and distortions about life in North America prior to European colonization – starting with the number of inhabitants. Archeological evidence indicates the Indigenous population of North American was closer to 40 million than the 1-2 million claimed in most official textbooks. This Over a period of 200 years, this number was reduced to a current Indigenous population of approximately 3 million.

Far from being naked savages, these 40 million lived in advanced sovereign nations comparable to the Mayan, Aztec and Incan civilization in Central and South America. These nations and city-states had extensive road networks and trade relationships and benefited from advanced agricultural techniques (which included irrigation), arts and sciences, and sophisticated systems of government, theologies and philosophies. Unlike other early civilizations, they didn’t domesticate animals. Rather they managed wild herds by deliberately creating food-rich forest parks to attract them. For this reason, they were also free of zoogenic diseases, such as small pox, influenza, measles, etc. that animal domestication introduced into other civilizations. .

By the 12th century, the Mississippi Valley was dominated by a number of large city states, including one (Cahokia) which had a population (40,000) larger than London (14,000) at the same period.

Covenant Nations and the Doctrine of Discovery

All these civilizations were destroyed by European settlers and armies who believed their Christian God had promised North America to them. Sound familiar? According to Dunbar-Ortiz, the US, like Israel and apartheid South Africa, is a Covenant Nation. In all three, the political elite justified the total subjugation, displacement and extermination of the original inhabitants based on a so-called Covenant with their God.

Although it was primarily Protestant English and Scots-Irish settlers who instigated and led the genocidal wars against Indigenous North Americans, legally they used a series of 15th century papal bulls, collectively referred to as the Doctrine of Discovery, as legal justification for their actions. These declare that European nations acquire title to any land they “discover” in Africa, Asia or the Americas – that Indigenous inhabitants lose their natural right to their land once Europeans arrive and claim it. The US Supreme Court upheld the Doctrine of Discovery in 1823.

A State of Perpetual War

Dunbar-Ortiz also carefully documents that the US has been continuously at war ever since their 200-year war against the Indigenous nations. Washington’s revolutionary army directed as much force against Native American resistors as against British troops. Until the 1800s, Indigenous populations exceeded that of the settlers. When the colonial leadership failed in defeating Indigenous warriors by force of arms, they resorted to killing their women and children.

In addition to providing a detailed description of all the battles, unprovoked massacres and forced dislocations of Indigenous Americans, Dunbar-Ortiz provides detailed background on numerous other US wars commonly omitted from textbooks. For example the two Barbary Wars (1801-05 and 1815-16). In 1801 President Thomas Jefferson dispatched the Marines to invade Tripoli* (Libya) because their ruler was exacting fees from US merchant ships that entered their territorial waters.

I particularly enjoyed the section about the US war on Mexico (which abolished slavery on gaining independence in 1821) and the US desire to extend the slave-plantation system westward. Following the US-Mexico War (1846-1848), the US annexed half of Mexico, which would become the states of Texas, California, Utah, New Mexico, Nevada, Arizona and Colorado. Violent conflict over whether these new states would be free or slave states would ultimately trigger the Civil War.

*This is the origin of the first line of the Marine hymn: “From the halls of Montezuma (referring to the US invasion of Mexico) to the shores of Tripoli.”