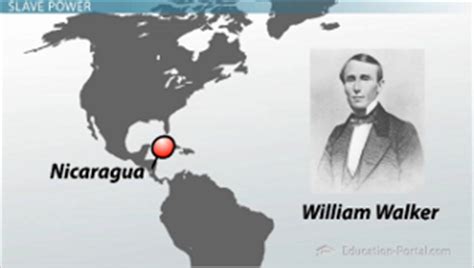 Episode 13: Sovereignty and Slavery in the American West

This lecture mainly concerns the heated battles occurring in Kansas and Missouri over slavery and the political forces behind them.

According to Ayers, the South had two main political factions, the Democratic “Fire-Easters” and former southern Whigs, and both supporter the continuation of slavery. The “Fire-Easters” believed the North intended to destroy the South and the only to stop them was to agitate continuously over the slavery issue. The former Whigs saw the “Fire Eaters” as a threat to the future of the South and slavery and tried to form a new party in opposition to the Democrats.

Among southern Democrats, there was strong support for expanding US borders to include Cuba and Central America. After organizing several military expeditions to Mexico, in 1855 Tennessean Dr William Walker led a military expedition to Nicaragua (in the grips civil war) and made himself president. President Franklin Pierce initially recognized Walker’s Nicaraguan government. However after cholera wiped out  Walker’s army, and shipping magnate Cornelius Vanderbilt* pressured Washington to end its support for his Nicaraguan government.

Although the southern economy boomed under slavery in the 1850s, some southern analysts warned the institution discouraged technological investment and long term development. In 1857, North Carolinan Hinton Helper’s book The Impending Crisis of the South argued that slavery was unsustainable because it required the continuing destruction of forests for new fields, as well as causing poor whites to be “ignorant, degraded and illiterate.” He called for both a tax on slaves and for the establishment of new colonies for free Blacks in Africa or Latin America.

The gradual expansion of the Republican Party in the North saw a rapid increase in anti-southern sentiment. The Kansas-Nebraska Act (which allowed new territories to decide for themselves whether to allow slavery) led to growing competition between pro- and anti-slavery factions for dominance in the new western territories. Northern philanthropists offered anti-slavery grants to encourage poor northern pioneers to settle in Missouri and Kansas.

In 1856, Kansas, which was 60% pro-slavery, elected a pro-slavery legislature which passed “Free Soil” laws prohibiting abolitionists from serving on juries or holding office and ordained the death penalty for any Kansas resident who assisted a fugitive slave. In response, the state’s Free Soil advocates elected their own government and wrote their own constitution. After abolitionists in New England and New York sent them rifles, pro-slavery forces in the southern states sent out an expedition of 3,000 militias to march into the Free Soil stronghold of Lawrence Kansas to execute warrants on anti-slavery leaders and two abolitionist newspapers. In what became known as the Sack of Lawrence, the militias burned down a hotel and threw printing presses into the river.

The following year the Supreme Court heard the case of Dred Scott, who sued his master for his freedom after he moved Scott and his family to the free state of Missouri. The court’s Democratic majority found that Blacks were not entitled to be citizens because their innate inferiority made them unfit to associate with white people.

In response to the Dred Scott decision, Republicans called for a sweep of all national offices in the 1860 elections, claiming the entire Democratic Party was captive to the southern viewpoint on slavery.

*Vanderbilt was infuriated when Walker ended Nicaragua’s contract with his shipping company.