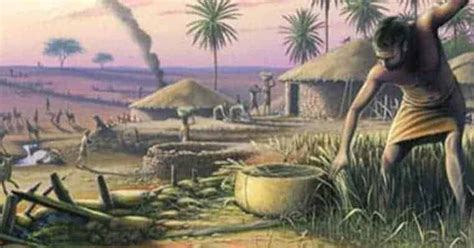 This documentary explores the ancient history of Jericho, based on archeological remains and carbon dating.

Recent evidence suggests that the city of Jericho dates nearly to 10,000 BC. The first known settlement (10,000 – 9,000 BC) contains some of the earliest examples of domesticated plants and animals. It’s believed Jericho was originally founded by “affluent” hunter gatherers, who came across the regions abundant grain grasses when the last Ice Age receded. Cultural artifacts suggest they had extensive trading relationships with other communities throughout the fertile crescent, including Göbekli Tepa Turkey.

The next settlement at Jericho (8,500 – 7,300 BC) is referred to as the Pre-Pottery Neolithic A Settlement. It seems to have had a much stronger religious focus (with evidence both of the “mother goddess” and male animalistic gods. Residents still mostly relied on wild gazelle for meat, though there’s some evidence they ate sheep and goats. It’s not clear whether these animals were domesticated or if people caught them and kept them in pens before eating them. They also ate domesticated wheat, barley, peas, and beans.

This city was replaced by the larger Pre-Pottery Neolithic B settlement (7300 – 5800 BC), housing roughly 2,000 people. Here the homes were rectangular, with clear evidence of domesticated pigs, goats, sheep, and oryx. The residents engaged in ancestor worship. Some major natural catastrophe (flood?) depopulated all of Palestine around 6000 BC, with human settlement resuming in the 5th century BC. Archeologists believe that between 5800 and 4000 BC, the region’s residents were nomadic herders, continually moving domesticated animals between pastures rather than settling in specific region.

During Jericho’s copper period (4,000 – 3,000 BC), the settlement was more like a small village than a city. Residents imported their copper (and obsidian) from the region that is modern day Turkey.

During Jericho’s bronze age (3100 – 1400 BC), it was clearly a city again, with defensive walls, an army and evidence of written Mesopotamian and Egyptian language. The city lost its independence in 2000 BC and for three and a half centuries was occupied by multiple competing powers, including Egypt, Assyria, the Mittanites and other regional powers. In 1550 BC the city was destroyed and would not reappear as an urban center for 100 years.

In 1400 BC the city was destroyed once again during wars with Israelite tribes. This would be consistent with the Biblical account in the book of Exodus.

In Engines of Domination, filmmaker Justin Jezewski and author Mark Corske lay out a historical and philosophical argument for anarchism – a stateless society people run themselves via direct democracy.

They begin by comparing class society to sheep herding. The latter began around 10,000 BC. Class society began around 5,000 BC when institutions of power (initially kings and priests and later nations and corporations) began domesticating people as well as plants and animals. The goal of this kind of domestication is to capture the energy of an entire community. Initially chattel slavery was the primary mechanism employed to domesticate human beings.

Since no one agrees voluntarily to being treated this way, this has to be done through a combination of force and deception.  The methods employed were developed over centuries through a process of trial and error. “Engines of domination” are the historical institutions that make this domination possible and which keep it in place.

The process begins with the confiscation of communal land by force (this happened to Europeans via the Enclosure Acts between 1500 and 1850), forcing the inhabitants to work for the ruling elite by depriving them of the ability to feed themselves. In Corske’s view, this denial of life support is a fundamental act of violence.

Maintaining control of confiscated land requires a command structure, i.e. a monarchy or its equivalent, the rule of law and weapons. Without weapons, domination over other human beings is impossible. Finally the ruling elite creates upper and ruling classes and provides them a range of privileges for keeping the working class in line.

This is the true structure of modern society. However it has to be concealed via deception and thought control. The working class vastly outnumbers the elite, and human beings would never submit to forced labor voluntarily. Prior to 200 years ago, this thought control was disseminated via state religion (it still is in Israel and Muslim countries). In so-called western democracies, it’s disseminated via compulsory public education and the mass media.

At present, the very biosphere that supports human life is being destroyed by a ruling elite whose sole focus is to amass more wealth. The only way to halt this ecological destruction, according to Corske , is to abolish political power, central authority and the institutions that support it. The engines of domination must be replaced by engines of liberation. This may seem like an impossible task, but this is because we are all conditioned to accept our captivity, much like domesticated animals who stay in the cage or pasture even when the door or gate is opened.

Corske believes we must employ the same trial and error process to walk back the layers of institutional domination that enslave us. Although the ruling elite is intensively organized, we have both superior numbers and human nature on our side. Contrary to contemporary mythology, human beings are basically freedom loving and incline towards cooperation rather than violence towards our fellow human beings.

Building a mass movement to take advantage of our superior numbers is essential. Corske feels the best way to do this is to organize for specific reforms with the ultimate goal of abolishing central authority.

This short documentary is based on Mark Corske’s book Engines of Domination, published in 2013.