Australian economist Steve Keen (author of Debunking Economics) has an excellent 2009 article on his Debtwatch site explaining how Fractional Reserving Banking (FSB) supposedly works. The major premise of the article is that true FSB only exists in the minds of academic economists. Keen begins with a quote from Karl Marx (and a prominent photo) that was featured in a January 2009 article Investors Shortchanged  in the Sydney Morning Herald: 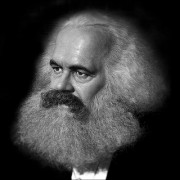 “Talk about centralisation! The credit system, which has its focus in the so-called national banks and the big money-lenders and usurers surrounding them, constitutes enormous centralisation, and gives this class of parasites the fabulous power, not only to periodically despoil industrial capitalists, but also to interfere in actual production in a most dangerous manner— and this gang knows nothing about production and has nothing to do with it.” (Das Kapital, Volume 3, chapter 33).

Although Marx was totally off base in predicting the imminent downfall of capitalism, he sure got it right about banks.

The Fiction of Fractional Reserve Banking

Keen’s article goes on to present M0/M1 and M2 data showing that what academic economists are calling Fractional Reserve Banking is actually a Pure Credit Monetary System. In other words, private banks are totally free to issue as much money, in the form of new loans, as they choose. They also have total control of both the money created by the commercial system and the money created by government.

What his graphs show is that credit money (M2) is created first and M0 or fiat money (the reserves to cover it) is created up to a year later. In a true FRB system, M0 or Base Money would increase first, and M2 would follow as banks issue new money based on their reserves. The other major problem is that combined public and private debt greatly exceeds M2. Under a true FRB system, total debt could never exceed the amount of fiat and bank money created.

Keen’s paper also includes an interesting prediction that the Federal Reserve’s quantitative easing (increasing M0 by electronically “printing” $85 billion in new fiat money every month) will be vastly insufficient to bring about economic recovery. He gives four reasons for this:

Keen predicts that quantitative easing will have little effect unless Federal Reserve Chairman Ben Bernanke pumps enough money into the economy to make a dent in the $42 trillion US debt. Deducting compound interest, he reckons $20 trillion would reduce it by about a quarter.

Ironically such a massive increase in government-issued Base Money (M0 ) would effectively replace our bank-controlled credit money system with a publicly controlled fiat money system. In other words it effectively restores the ability of the federal government to issue money, as Lincoln did (see The Role of Foreign Banks in US History).

Makes you wonder if this is Obama’s and Bernanke’s true agenda with all the electronic money they’re printing – to quietly nationalize America’s monetary system through the backdoor.

For more background on how private banks create the vast majority of US dollars (out of thin air), check out the free video The Secret of Oz: