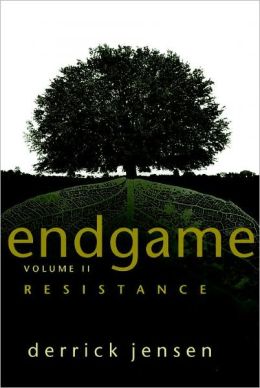 Endgame: The Problem of Civilization

Although the writing style is quite informal, the basic structure of environmental activist Derrick Jensen’s two volume opus is that of a philosophical treatise. In Endgame, Jensen makes two highly controversial arguments:

1. The planet and the human species can only be saved by bringing down civilization.

2. This can only be accomplished by violent means.

Like a philosopher, Jensen builds his case on 20 basic premises listed at the beginning of both volumes (see below). By definition, a premise is mutually agreed assumption (as opposed to a statement of fact) that is used to rationally derive a set of conclusions. In other words, if someone rejects your premises, they will also disagree with conclusions based on these premises.

I myself agree with all but premise 9 and 12. Ten years ago, it was believed that the loss of fossil fuel based industrial agriculture would result in a big drop in population. However more recent research shows that permaculture and biointensive agriculture produce higher crop yields than factory farming. I also believe there is a vast difference between rich and poor people, both in terms of lived experience and power.

In Volume 1, Jensen traces the rise of cities, which by necessity steal resources from distant regions and eventually denude the entire landscape of these resources. After making the case that the corporate elite are voraciously consuming an ever increasing amount of energy, land, water and other resources, Jensen reminds us that we live on a finite planet. He then argues that corporations will most likely continue this greedy consumption until everything is used up – or until we stop them.

Volume 2, which is less structured and more informal, encapsulates many of Jensen’s experiences with the environmental movement and dogmatic “nonviolent” resistance advocates. Given the CIA’s heavy infiltration of both domestic and foreign non-violent resistance campaigns (see How the CIA Promotes Nonviolence), these chapters resonated strongly with my own experiences.

Other than general talk about blowing up dams and cellphone towers, Jensen is deliberately (and in my view wisely) vague about the exact form of violence he’s proposing.

1. Civilization can never be sustainable, especially industrial civilization.
2. Traditional (ie indigenous) communities do not give up or sell their resources unless these communities are destroyed.
3. Industrial civilization would quickly collapse without its reliance on widespread violence.
4. Civilization is based on a clearly defined – violence by those at the top of the hierarchy against those at the bottom is often invisible.
5. The property of those at the top of the hierarchy is more valuable than that of those at the bottom.
6. Civilization isn’t redeemable – it will never voluntarily undergo sane transformation.
7. The longer we wait to bring down civilization, the messier the ultimate crash will be.
8. The needs of the natural world are more important than the needs of the economic system.
9. Some day there will be far fewer human beings on the planet than there are today.
10. The culture as a whole and most of its members are insane. The culture is driven by a death urge, an urge to destroy life.
11. From the beginning this culture – civilization – has been a culture of occupation.
12. There are no rich people and no poor people. The rich delusionally believe they own all the land and the police enforce these delusions. The poor buy into these delusions almost as completely as the rich.
13. Those in power rise by force. The sooner we accept this, the sooner we can decide how best to resist them.
14. From birth on, we’re acculturated to hate life, the natural world, women and children, to fear our bodies and to hate ourselves.
15. Love doesn’t imply passivism.
16. The material world is primary (to the spiritual world). Real world actions have real world consequences.
17. It’s a mistake (or more likely denial) to base our decisions on whether the actions stemming from them will or won’t frighten fence sitters or the mass of Americans.
18. Our current sense of self is no more sustainable than our current use of energy or technology.
19. This culture’s main problem is the belief that controlling and abusing the natural world is justifiable.
20. Within this culture economics – not community well being, not morals, not ethic, not justices, not life itself – drives social decisions.

The 2011 documentary EndCiv: Resist or Die is loosely based on Endgame.