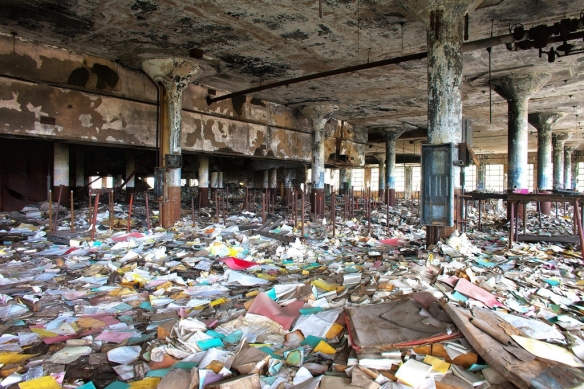 (This is the 4th of 6 posts in which Miller describes how Detroit residents and auto industry pensioners were deliberately swindled by Wall Street, with the help of the state and federal government.)

What Really Happened in Detroit

With Detroit’s financial difficulties, the banksters recognized the opportunity to take the next step forward. At its peak in the Industrial Era, the city’s auto plants produced half of the world’s cars with 350,000 workers. Today the few factories that remain produce even more cars with a workforce of only 20,000. Their job is to mind the robots that actually do the manufacturing.

Wall Street and the state apparatus combined to push the city into bankruptcy so they could go after public worker pensions nationally. Across the US there are more than 22 million public workers, about half of them teachers. (10) The financial industry quickly ensnared public worker pensions in predatory debt. Then their political agents loudly proclaimed that local government could no longer function due to these debts. Detroit, like all city governments also owes huge amounts to the banks, the result of various predatory loans. However, there is never a discussion about not paying these contractual obligations, even though there is abundant evidence that they are grounded in criminality. (11)

From 2004 to 2006, 75 percent of mortgages issued in Detroit were subprime. By 2012, banks had foreclosed on 100,000 homes. This trashed the city’s real estate by 30 percent and caused the flight of almost a quarter million people. These two factors drove the tax base severely downward.

Under both Republican and Democratic governors, the Michigan state government cut $700 million in state revenue sharing. Michigan, however, boasts the largest corporate subsidies per capita in the country – a total of $6.2 billion. (12) Detroit also gives more than $20 million a year in subsidies to local corporations for elite downtown projects.

Then the state jumped in to employ coercion against the people. This took the form of an Emergency Manager, imposed by the Michigan governor, with complete powers over the city’s government, including breaking contracts at will and selling off public property. In 2013, the EM closed over 30 schools as “too expensive”, and then he used the money to build a new ice rink for the Detroit Redwings hockey team. The EM is a modern form of fascism; his dictatorial policies are backed up by the police. Detroit residents lost the civil right to vote.

While city operating expenses fell, the financial costs of debt servicing shot up. The public policy organization, Demos, wrote in 2013, “Detroit’s financial expenses have increased significantly, and that is a direct result of the complex financial deals Wall Street banks urged on the city over the last several years, even though its precarious cash flow position meant these deals posed a great threat to the city.” (13)

The Financial Times reports that Detroit will eventually pay nearly double the principal — in other words, Detroit is effectively paying 100 percent interest. (14) So we see that predatory lending against homeowners begets predatory lending against cities. The city’s, debt servicing could rise from 28% to 65% of the city’s annual budget, effectively making it an ATM for the financial industry.

In December, a federal judge ruled the pension rights, guaranteed by Michigan’s state constitution, were simply a “contractual relation”, rather than a right, and held that federal bankruptcy law, as applied to corporations, determines city bankruptcies, even though few US cities have ever gone bankrupt. This means that the interests of hedge funds and banks have priority over the interests of retired city workers, who must already make due with pensions that average only $19,000.

The betting is that city workers’ pensions will be cut by 84%. At the height of the economic Meltdown, alpha financier and speculator, Lawrence Summers, was asked why the banks used public money to pay exorbitant executive salaries. “A contract is a contract”, he bellowed. Obviously this rule of law no longer applies to public worker contracts.

Just as international banks are demanding that Greece sells off its ports, transport systems, tourist attractions, beaches and other assets in the public domain, so Detroit is now planning to sell the bridge and tunnels to Canada, the Joe Louis Boxing Arena, and the tremendous collection of art in the Detroit Institute of Art. This crime is not too different from the Nazi rape of art from across Europe, nor the US organized destruction of the Iraq Museum after they took Baghdad in 2003.

But it’s all so legit! These items will be bought by billionaires and banks with credit, which the city will then send to the banks to pay off the debt. Detroit becomes a simple pass-through account. This is naked expropriation of the wealth of the public. These are the worst of times.

10)  “How Many Government Employees Are There?”

Steven Miller has taught science for 25 years in Oakland’s Flatland high schools. He has been actively engaged in public school reform since the early 1990s. When the state seized control of Oakland public schools in 2003, they immediately implemented policies of corporatization and privatization that are advocated by the Broad Institute. Since that time Steve has written extensively against the privatization of public education, water and other public resources. You can email him at nanodog2@hotmail.com