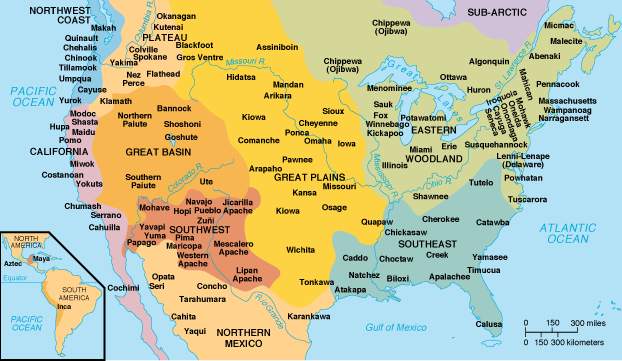 As Benjamin describes in this lecture, early human civilization developed spontaneously on four isolated continents: the Afro-Eurasian zone, the Americas, Australasia and the Pacific. The American civilizations developed 2,000 years later than those of Afro-Eurasia. According to Benjamin, this delay stemmed from difficult climatic conditions that made it difficult to produce sufficient food for the development of complex cities.

Woodland tribes east of the Mississippi River lived in semi-sedentary groups that grew corn and beans via horticulture.* Prior to 60 AD, they practiced woodworking, leather working, shelter building and tool production. From 600-800 AD, they abandoned their semi-nomadic life ways to establish permanent villages of up to 40,000 inhabitants and began using a bow and arrow, rather than spear, to hunt. By 1400 AD, the five Iroquois tribes formed a state-like structure referred to as the Iroquois Nation.**

Tribes in the Ohio River Valley traded with tribes across the continent, obtaining mica from the Appalachian Mountains, conch shells and sharks teeth from the Gulf of Mexico and copper from upper Michigan.

In the Southwest, the Pueblo people employed irrigation from 600 AD and built permanent adobe structure. They abandoned these dwellings around 1300 AD to return to a lifestyle of hunting and gathering. Benjamin claims this was due to drought, but in The Dawn of Everything, Graeber and Wengrow maintain foraging is even more sensitive to drought than agriculture and residents either overthrew a tyrannical regime or simply opted out. See https://stuartbramhall.wordpress.com/2021/12/14/the-dawn-of-everything-a-new-history-of-so-called-civilization/

In the Northwest, Chinook and Yakima tribes established semi-sedentary settlements lasting several thousands of years after bow and arrow technology spread across the Great Plains.

The Paleo Eskimo tribes became expert fishermen and hunters. They lived in ice houses they heated with fire and crafted fur clothing, canoes and exquisite tool, spears and knives from bone, antler, stone and tusks.

Benjamin notes that all North American tribes developed shamanistic practices and grew corn and tobacco (which were first domesticated in South America).

The Vikings were the first Europeans to make contact with North American tribes in Newfoundland in 1000 AD. They returned to Scandinavia during the Little Ice Age (1400-1600 AD), when it became too cold to produce sufficient food.

*Horticulture is the cultivation of domesticated plants at a small scale garden level, as opposed to agriculture, which focuses on mass production of food.

This is a documentary about the rise of the organic/local food movement in the late sixties and early seventies and the ongoing battle to end a corrupt federal food subsidy program. The latter plays a major role in the US epidemic of obesity and diabetes.

The film depicts the organic food movement as arising out of a 1960s hippy counterculture that viewed America’s growing system of industrial agriculture as intimately linked to the military industrial complex waging the war in Vietnam.*

Ironically the organic food movement began to take off just has the Nixon administration was repealing New Deal agricultural subsidies that supported small family farms and redirecting USDA subsidies to corporations producing the cheap commodities used in processed foods, such as corn, wheat and soy.

The activists interviewed decry the federal emphasis on cheap food as a false economy – we will never save enough to cover skyrocketing medical costs related to processed food diets.

Despite the rapid growth of small organic farms across the US, food activists face an uphill battle without major changes to the USDA farm subsidy program which makes cheap processed food the only affordable option for many low income families.

The high level of corporate-financed corruption becomes clear as the film follows Representative Ron Kind’s efforts to get his Fairness in Farm and Food Policy Amendment added to 2016 Farm Bill.

Although this documentary acknowledges the arrival of Europeans diminished the Native American population by 90%, it omits any mention of the massacres, enslavement or land expropriation that were the primary cause of their demise. For some odd reason, it makes it appear as if they died out due to accidental exposure to small pox, measles and influenza and European pigs that destroyed their crops.

That being said, the film gives a reasonable depiction of the great civilizations along the Mississippi River and in Central and South America that were destroyed by Europeans. It also accurately portrays how the introduction of corn and potatoes to Europe was far more important than New World gold and silver in the rise of capitalism and the flowering of European civilization.