This intriguing five-part documentary series contrasts Japan’s aggressive effort to reduce homelessness with the apparent indifference of the US government. In my view, the stark contrast makes an important statement about the shameful greed and corruption underlying the US political system.

Part 1: The series begins by examining why Japan has always had a much lower endemic rate of homelessness than the US:

*Japan has no paramilitary organization comparable to the CIA, which openly engages in narcotics trafficking as part of its strategy to destabilize regimes unfriendly to Wall Street interests.

**In the US, the community mental health movement Kennedy started never received full funding following his assassination. Instead the mental health centers he created to replace mental hospitals have experienced continuous budget cuts dating back to the Reagan administration.

This is Crazy: Criminalizing Mental Health

This documentary showcases US policies which are shutting down psychiatric hospitals and community mental health centers and warehousing America’s mentally ill in jails and prisons. It features in-depth interviews with two mentally ill women who survived lengthy incarcerations, as well as commentary by psychiatrists, mental health workers and prison reform advocates.

America’s barbaric treatment of the mentally ill constitutes a crime against humanity under international law. Sadly it’s not a new problem. Thanks to the steady cutbacks in mental health services and housing subsidies that began under Reagan, it was clear by the mid-eighties that most mentally ill Americans were ending up in jails and prisons and on the street.

In 2002, Bush junior made even deeper cuts in mental health funding to finance the wars in the Middle East. Meanwhile, thanks to the 2008 global economic scam (which effectively transferred billions in taxpayer dollars to billionaires), states cut an additional $5 billion in mental health services* and eliminated 4,500 psychiatric beds.

Police Harassment of the Mentally Ill

The documentary begins by highlighting the brutal treatment of the mentally ill at the hands of police. When I practiced in Seattle, police routinely underwent crisis intervention training that enabled them to recognize when suspects were psychotic and to appropriately de-escalate threats of violence. This training also made it far more likely mentally ill offenders ended up in treatment facilities – as opposed to jail or prison.

Thanks to ongoing budget cuts and the militarization of local policing, most cities have abandoned routine crisis intervention training. In recent years, it’s become common for cops to kill psychotic individuals when they create a disturbance on the street – either by shooting them or repeatedly tasering or beating them to death. The lucky ones end up with lengthy prison sentences.

This is Crazy continues by examining the brutal treatment psychotic inmates receive from prison guards. There is often no effort, especially in private prisons, to ensure they receive their prescribed medication. Instead guards physically abuse them and put them in solitary confinement in a (mostly futile) effort to get them to comply.

Warehousing the mentally ill in jails and penitentiaries also rips of taxpayers – as it costs $15 billion more annually than outpatient mental health treatment. 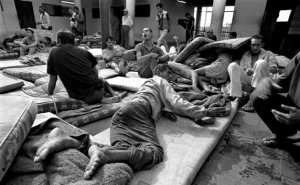 This final post concerns the third main driver of high US incarceration rates: the warehousing of the mentally ill in America’s prisons and jails. It’s the one I’m most intimately acquainted with, after campaigning for 14 years, alongside the National Alliance for the Mentally Ill, to end this medieval barbarism. Federal and state lawmakers are perfectly aware that 1) this 40 year old practice constitutes a crime against humanity under international law and 2) that imprisoning the mentally ill costs taxpayers two to three times as much as community treatment. Yet our elected representatives remain unwilling or incapable of rectifying this problem.*

Aside from the absolute barbarity of warehousing vulnerable mentally ill offenders with violent psychopaths, locking them up costs the taxpayer far more than providing them outpatient mental health services: adding up to $150 billion annually

I see two main factors behind the American practice of using correctional facilities to warehouse the mentally ill. Number one is the systematic defunding of America’s mental health system. Number two is the systematic defending of federal housing programs that initially provided shelter for the mentally ill when they were first released from state mental hospitals in the sixties, seventies and eighties.

The movement to close state mental hospitals and “deinstitutionalize” the mentally ill began in 1963, after President John F. Kennedy signed the Community Mental Health Center Act. The goal of the new law was to replace institutionally based mental health treatment with community based care, by funding outpatient community mental health centers, group homes and residential facilities. In the early seventies, the discovery of effective pharmaceutical treatments for schizophrenia and manic depressive disorder facilitated this process.

As anticipated, state legislatures all over the country jumped at the opportunity to shift the cost of mental health care to the federal government. Because they provided 24/7 care, state hospitals had monstrous labor costs and lawmakers were only too happy to close them.

Unfortunately this federal funding dried up when Johnson created Medicaid for low income Americans in 1968. From this point on, the only federal mental health funding states received was from the individual entitlement of the Medicaid patients they served. Any non-Medicaid patients they treated had to be funded by private fees and charity.

Faced with steep funding cuts, states had no choice but to turn away thousands of mentally ill clients in genuine need of treatment. It was during the early eighties, under the Reagan administration, that large numbers of mentally ill Americans first made their appearance on the streets and in jails and prisons.

America’s mental health system would take a further hit in 2006 when Bush further slashed federal Medicaid funding to help finance the wars in Iraq and Afghanistan. States responded with further service cutbacks and, as always, jails and prisons took up the slack.

America’s mental health system would enter its death spiral when the economic recession hit in 2008. A study by the National Alliance on Mental Illness reveals the states slashed an unprecedented $1.8 billion from their mental health budgets between 2009 and 2011.

Continuing a well-established trend, mentally ill patients unable to access community treatment would end up in jail or prison.

*The total indifference of our elected representatives to our prison system’s crimes against humanity is well illustrated by this post on solitary confinement (which also violates international law):  Oh, Just Stop It

**Bedlam refers to the Royal Bethlem Hospital in London, the first to specialize in the treatment of the mentally ill.