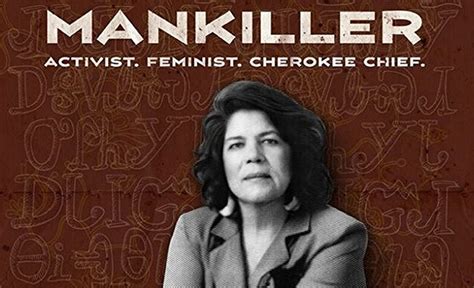 This 2017 documentary is a tribute to the late feminist Native American Wilma Mankiller, the first woman to become a Cherokee Nation Principal chief in 1985.

The precolonial Cherokee Nation as a matriarchal society in which children, property and homes all belonged to women. Early British settlers belittled the Cherokee as a “petticoat” culture because female elders to signed along with men. With the Trail of Tears and the mass relocation of Cherokee from the Southeast to Oklahoma, European patriarchal values (which treated women as chattel) gradually prevailed.

Mankiller was born to an extremely poor family in Mankiller Flats Oklahoma. In the mid fifties the family was relocated to San Francisco by the same US official responsible for Japanese internment during World War II. There the family were housed in the notorious Hunter’s Point housing project.

During the 1960s, Mankiller worked together with United Food Workers activist Dolores Huerta and helped the Black Panthers with their children’s breakfast program. In 1969 she participated in the Native American occupation of Alcatraz and Pitt River land seized illegally by PG&E and the federal government.

In 1977, she returned to Mankiller Flats, where she launched numerous community projects to assist local Cherokee communities to become independent of corrupt Bureau of Indian Affairs (BAF) control. Elected deputy chief in 1983, she assumed the role of Principal Chief in 1985, after Clinton appointed her predecessor as Undersecretary of the Interior. She was elected in her own right in 1985 and 1990.

After developing lymphoma in 1995, she chose not to run for reelection. Nevertheless she continued to actively campaign for her tribe’s economic and political independence until her death in 2010.

One of her most important achievements was involving the Cherokee Nation in the gaming industry. This not only freed them from economic dependence on the BAF, but created thousands of jobs and funded the construction of four major health care centers.