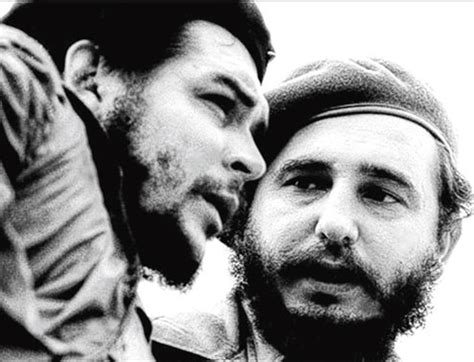 This is a documentary about Fidel Castro, Che Guevara and the 1959 Cuban Revolution. In addition to exploring the revolution’s early history, the filmmakers trace how Cuba came to rely on the Soviet Union for its economic survival – and how the Soviets forced Castro to exile Che from Cuba for political reasons.

After traveling extensively through South America, Che Guevara, deeply affected by the extreme poverty and exploitation he saw, was totally committed to “permanent revolution.”* In contrast Soviet leaders were committed to socialism in one country and “peaceful coexistence with the US.” They opposed Che’s guerilla activities in Africa and Latin America owing to the potential threat they posed to US-Soviet relations.

The most interesting part of the film reveals that the CIA initially supported Castro’s guerillas  with arms, funding and US volunteers because they viewed him as “easy to control.” It contains priceless footage of Castro denouncing communism (in English) to an American audience and calling for Cuban “representative democracy.”

In February 1959, the US initially recognizes Castro as Cuba’s new prime minister. A few months later, he appoints Che (an avowed Marxist) to head the Cuban national bank. The US responds by blocking all credit to Cuban banks. Castro retaliates by nationalizing Cuba’s American businesses. The US government, in turn, blocks all Cuban sugar imports.

Given that 90% of the Cuban economy is based on trade with the US, the country is on the verge of collapse. Castro is left with no choice but to ally himself with the USSR to trade Cuban sugar for oil and financial aid.

Under Soviet direction, Castro ends Che’s governmental role in 1963 and sends him on a series of foreign missions.After several speeches critical of Soviet leaders (for failing to support third world guerilla movements), Che angers them further by cultivating relations with China, just as the USSR and China are becoming estranged.

After an unsuccessful campaign with guerilla fighters in the Congo, Castro sends Che to Bolivia, where he and ten fighters who accompany him are stranded without weapons, food, medicine or support from the Bolivian Communist Party. On October 9, 1976, Che is wounded in a firefight with Bolivian security services. He is subsequently captured and executed.

*As envisioned by Leon Trotsky, this refers to a country’s continuing revolutionary progress being dependent on a continuing process of revolution in other countries.

This film can’t be embedded for copyright reasons. It can be viewed free until April 7 at the Al Jazeera website: Che Guevara Fidel Castro Revolutionary Friends