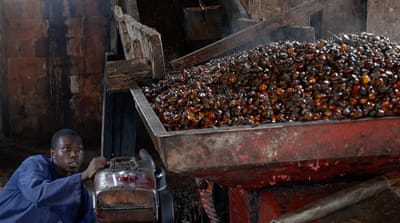 Part 2 of Pricing the Planet is even more disgusting than Part 1. It concerns the “green conferences” organized by oil, chemical and mining companies to promote ways they can invest in “credits” to mitigate their activities that degrade the environment.

All the industries that attended a recent “green conference” continue to lobby heavily against government regulation to curb the environmental damage they cause. However now that they see an opportunity to profit from carbon and species trading they’re suddenly spouting off about the future of our planet.

The documentary shows footage of Dow Chemical and Nestle executives at a recent green conference. Dow has one of the worst reputations for environmental degradation. Dow produced Agent Orange, responsible for cancer and birth defects in thousands of Vietnam veterans and Vietnamese civilians and their offspring. They also own the subsidiary responsible for the chemical factory that exploded in Bhopal India, poisoning thousands. Nestle is notorious for depleting fresh water all over the planet, which they sell back to us as bottled water.

Unsurprisingly the World Bank supports corporations who buy and sell the right to destroy the environment by selling Green Bonds (which corporations use to mitigate their environmentally harmful activities). Carbon and endangered species trading are also strongly supported by the United Nations.

The high point of the film is a vignette featuring Indian environmentalist Vendana Shiva explaining how financialization always leads to degradation. She further states, “Wherever a price is placed on nature, nature has been destroyed.”

She maintains the continual destruction of the environment in the name of economic growth is a sickness in the human mind.

This documentary is about an endangered species trading scheme in which banks like J P Morgan and Goldman Sacks invest in projects that protect endangered species (eg bees, coral reefs, orangutans) or ecosystem services (eg (rain forests, clean water, wetlands clean air, topsoil). They then sell credits in these projects to corporations who wish to engage in mining and development that kill these species or destroy rain forests and wetlands.

In 1988, Bush Senior was the first to promote this model of environmental protection with his No Net Wetlands Loss policy. It enabled corporations that were destroying wetlands to purchase credits in wetlands that being set aside for preservation. This model was later employed in carbon trading schemes in which industries are allowed to emit CO2 pollution if they purchase credits in reforestation projects that capture CO2. After nearly 20 years of operations, this scheme has made speculators in carbon credits fantastically rich while allowing CO2 emissions increase exponentially.

Bankers and corporate executives argue that endangered species trading is the only way to save the planet because government regulation hasn’t worked (largely because banks and corporations have blocked effective environmental regulation). Most grassroots environmentalists oppose species trading. They argue that bees, reefs, orangutans and rain forests can only be saved with a total ban on activities that endanger them.

Globally Malua BioBank runs the largest “mitigation” project. They recently purchased the Malua Forest in Borneo for $64 million. They sell credits in the Malua Forest to palm oil companies to enable them to destroy other Indonesian rain forests, as well as companies that use palm oil products.

The Nature Conservancy (whose current CEO is a former Goldman Sachs banker) and other large environmental NGOs support “species banking” because they rely on large corporate donations to cover their staff salaries.

The video can be viewed free at the Al Jazeera website: Pricing the Planet

The Honey at the Top

The Honey at the top is about the 30-year battle the indigenous Sengwer are waging against the World Bank and the corrupt Kenya Forest Service (KFS). The latter are trying to evict the Sengwer from their ancestral Embobut Forest. The Kenyan government seeks to use the forest in a lucrative carbon trading scheme.

Although the Kenyan courts have ordered the KFS to desist from harassing Sengwer families, the former continues to launch periodic raids in which they beat up women and the elderly, set fire to their homes and arrest entire families – demanding bribes for their release. The World Bank funds these KFS activities.

Both the World Bank and the KFS declined to be interviewed for this documentary.

* Carbon trading is the scandal ridden scheme of buying and selling permits and credits to emit carbon dioxide. Despite being a central pillar of the EU’s efforts to slow climate change, there is no real evidence it has successfully reduced carbon emissions .

The Five Changes of Climate Grief

The Five Changes of Climate Grief is a humorous documentary in which Arnold Schwarzenegger plays a psychiatrist and Bill Nye the Science Guy plays himself as the latter grapples with climate denial (not the kind Exxon pays for but the personal kind all of us experience).

The main premise of the film is that all of us experience some degree of grief in confronting the enormity of the climate crisis. Thus all of us must work through the five stages of grief – denial, anger, bargaining, depression and acceptance – as we collectively struggle to find a solution.

The video has some great footage of the ecological devastation caused by Canadian tar sands mining and processing , as well as beach front properties on the Florida coast that are already uninhabitable due to rising sea levels.

I was delighted to see the filmmakers expose carbon trading for the corrupt corporate-driven scam it is.  I was also pleasantly surprised to see that most states (including Oklahoma and Alaska) have plans in place to achieve 100% fossil-free energy production by 2050.

Parts of the documentary I objected to were the heavy promotion of electric vehicles (we can only produce sufficient renewable electricity for very wealthy people to own them) and the promotion of Guy McPherson as an expert in climate science. Recently McPherson, whose science background is in ecology, natural resources and evolutionary biology, has been making claims that catastrophic climate feedback loops will cause human extinction within the next six months.