This Frontline documentary concerns the November 8, 2018 wildfire that destroyed the town of Paradise (pop 50,000) in Northern California. It provides a minute by minute account of a small brush fire ignited by a faulty PG&E transmission tower that became a fire storm in 45 mph winds.

According to filmmakers, PG&E considered shutting the grid down in view of high wind speeds but decided against it. At present, the Butte County district attorney is still weighing criminal charges against the company for “reckless arson.”

Most PG&E transmission towers have a life expectancy of 65 years, but many are over 100. Malfunctioning high voltage lines has caused 100s of California wildfires in the last few years. The company has already experienced one criminal conviction for a 2010 gas explosion. This is in addition to $3 billion in fines for wildfires caused by transmission towers and lines.

At present they face $10.5 billion in liability claims for the fire that destroyed Paradise. In July they filed for bankruptcy protection in the face of multiple liability claims.

The film also suggests police and Cal fire erred in failing to evacuate Paradise residents sooner. Because there is only one road leading down the valley, Paradise, located in the Sierra Madre foothills, can only be safely evacuated by zones. A number of people burned to death in their cars, thanks to the gridlock caused by thousands of residents trying to evacuate simultaneously.

In all, 85 people died in the Paradise fire. A week after the evacuation, the winds died down sufficiently for 5,000 firefighters from around California to begin efforts to put it out. It wouldn’t be totally extinguished until winter rains started two weeks after the fire.

For me the most significant segment of this final episode concerns the austerity cuts Roosevelt enacted in 1937, in response to business critics who attacked the burgeoning national debt.

As FDR laid off half the workers employed by the Works Progress Administration (WPA), the effects rippled throughout the economy. The stock market crashed in October 1937, even faster than in 1929. Businesses failed in record numbers and unemployment climbed to 20%. Once again, thousands of unemployed Americans were on the brink of starvation.

The 1937-38 depression is known as the “Roosevelt Depression.”

Part 7 also explores the mass migration of indigent Americans to California, under the misguided belief they would find plentiful food and jobs. Like 20 or so other states, California enacted laws to keep out the unemployed. With the help of local residents groups, police patrolled California’s borders for six weeks in 1938. They turned back all newcomers without $10 on their person.

Many of the state’s new migrants were housed in giant federal camps, as there was nowhere else for them to live.

After Eleanor Roosevelt testified to Congress about her fact finding tour to the camp, FDR introduced (and passed) a $5 billion spending bill.

In September 1939, Britain declared war on Germany following the invasion of Poland. By May 1940, Denmark, Norway, Holland and Belgium had fallen to the Nazis and Hitler was bombing the UK.

A year later, FDR initiated the first peace time draft in US history. Jobless men flocked to enlist because there were still no jobs. Forty percent failed their physicals due to lingering health effects of starvation.

A few weeks before the November 1940 presidential election (which he won), FDR authorized $7 billion in military aid to Britain, opening up thousands of jobs in the defense industry.

Yet it would take another three years – and US entry into the war – before the country returned to full employment.

The Great Depression – Part 4 We have a Plan

Part 4 is largely about famous author Upton Sinclair’s campaign for California governor. This is something they definitely don’t teach in school. Because he nearly won.

The parallels with Bernie Sanders 2016 presidential campaign are uncanny. Sinclair, also a socialist, registered as a Democrat for the 1934 campaign. He received the same massive popular response from Californian workers that Sanders and UK Labour leader Jeremy Corbyn have received. Thousands of young people flocked to join the California Democratic Party, which hadn’t won a gubernatorial race in  35 years.

Sinclair easily won the Democratic primary and polled ahead of his Republican opponent until he was betrayed by the Roosevelt administration. After trying to pressure him to quit the race in favor of the third party candidate, they made a deal for California Democrats to support Sinclair’s Republican opponent – in return for the latter’s support of Roosevelt’s New Deal legislation.

In the last weeks of the campaign, Sinclair was also hurt by the massive media smear campaign launched by MGM studio boss Louis B Meyer.

This episode also covers San Francisco’s 1934 general strike and FDR’s unsuccessful attempt to create a national health service as New Zealand did in 1938. 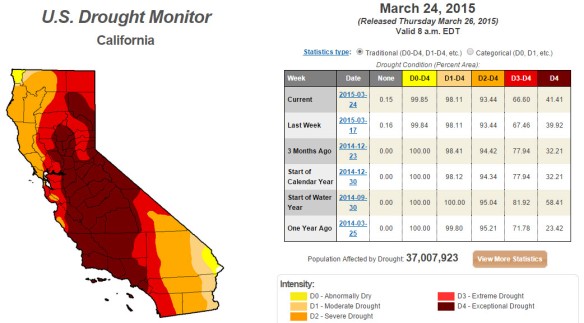 The item below indicates the kind of devastation that has occurred, and will increasingly occur, as a consequence of outlandishly high energy consumption and the abject failure throughout most of the world to address energetic and environmental matters.

As long as New Plymouth District Council (NPDC) continues to focus on business-as-usual (economic growth, covering ‘everything’ with concrete and asphalt, tourism, entertainment, boondoggles etc. ) everything in the district will continue to be made worse by NPDC, until everything collapses.

With California (population 40 million and ‘food-basket’ for America going under, we are in for a very ‘interesting’ period 2015 to 2016.

Amid the “cruelest winter ever,” with the lowest snowpack on record, and with 98.11% of the state currently in drought conditions, California Governor Jerry Brown orders mandatory water cuts in California for the first time in history…

And finally some action…

California Gov. Edmund G. Brown Jr. announced a set of mandatory water conservation measures today, as the state continues to struggle with a prolonged drought that has lasted for more than four years.

“Today we are standing on dry grass where there should be five feet of snow,” Brown said in a statement after visiting a manual snow survey in the Sierra Nevadas. “This historic drought demands unprecedented action.”

Kevin David Moore, a fellow New Plymouth resident, is a founding and executive member of ASPO-NZ (The Association for the Study of Peak Oil). He’s New Zealand’s leading energy-environment-economic analyst, and has written five books on the global economic system and its effects on both the global environment and on ordinary people. He is noted for highest-level analysis, for telling truths most people shy away from, and for challenging the dysfunctional policies formulated and implemented by central and local government.