Episode 17: Rome and Roads from the West

I found this lecture valuable due to surprising insights on Roman history I’ve never encountered before.

Benjamin traces the collapse of republican rule in Rome to the economic collapse it experienced following its 16- year battle with the Carthaginian general Hannibal. The Carthaginian general destroyed many farms during his 16-year rampage through the Italian peninsula. To make matters worse, many farmers were recruited as troops and had nowhere to return to following Hannibal’s defeat in 203 BC. Newly unemployed, they flocked to Rome’s tenements while Roman patricians bought up their vacant land. Instead of growing grain to feed Rome’s poor, they employed slaves to grow olive trees for oil and grapes for wine.

Here Benjamin stresses that so-called Roman democracy was actually a senate oligarchy. The rise of various populist reformers, including Tiberius and Gaius Gracchus and Julius Caesar, led to 100 years of civil wars.

Before the senate appointed the latter “Dictator”* for Public Affairs” in 49 BC, 65% of the Roman population was on the dole and dependent on government grain handouts to keep from starving. At the time of his assassination in 44 BC, Caesar had reduced the percentage requiring government assistance to 20% (see How Senate Corruption Caused the Demise of the Roman Republic/

After Caesar’s adopted son Octavian hunted down and killed Caesar’ assassins, he took power in 27 BC and declared himself emperor.** In gratitude for his success in ending the civil war, the Roman senate also gave himself the title “Augustus.”

The Romans first exposure to silk occurred in 53 BC during the Battle of Carrhae, when their Parthian*** opponents unfurled a massive silk banner, causing Roman troops to flee in terror.

The northern route the Silk Road took from Rome left from their Mediterranean colony Antioch, traversed the Syrian desert to Palmyra, from there crossing the Zagros Mountains to Ctesiphon the capitol of the Parthian Empire. From there it crossed the Ferghanna Valley in Kushan to Mongolia and eventually the Han capitol Changan.

The southern routes either crossed entered the Central Steppes via Bactria or went due south from Yakhan to the Indus Valley.

According to Pliny the Elder, the silk trade cost the Romans roughly $6 million a year in current dollars. Some historians blame the collapse of Rome on the millions of dollars Rome spent on Chinese imports, which included glass, cotton (from India), copper, iron, precious stones and peppers.

During the early Roman empire, maritime trade routes also developed as Roman sailors (departing from Egypt, a Roman colony) began using seasonal winds to sail to Asia. This was a marked departure from past ocean journeys East, which had hugged the coastline and taken much longer. Rome eventually established ports all along the Arabian peninsula and the west coast of India.

*In Roman times, a “dictator” was an official the senate granted temporary power during a public crisis. See https://www.merriam-webster.com/dictionary/dictator

Early in the second century BC, the Han emperor Wudi dispatched Zhang Xian as an envoy to the Yeuzhi Federation on the Central Steppes. Wudi’s goal was to seek an alliance with the Yeuzhi against the repeated raids of the Xiongu nomads to China’s north. Long time rivals of the Yeuzhi, the Xiongu had launched a series of brutal attacks that had forced them to migrate thousands of miles and eventually resettle (in 130 BC)in the Oxus River valley (presently northern border of Afghanistan).

Leaving China in 138 BC, it took Zhang Xian ten years to reach the Yuezhi in Bactria with his coterie of 100 men.* The first Chinese in history to cross the Himalayas, he was captured by the Xiongu as he headed through the Gonzu Corridor (controlled by the Xiongu) in the Gobi Desert.

After the Xiongu killed most of his men, Zhang Qian himself was transported to their headquarters on the northern steppes. After ten years of captivity, he  escaped, along with his Xiongu wife and their children. When he finally arrived in Bactria in 120 BC, the Yuezhi refused to ally with the Han Dynasty to confront the Xongnu.

The Xongnu rearrested Zhang Qian on his return trip in 125 BC. After being held for a year, he was released on the death of the Xiongu leader.

The reports he brought back to Wudi gave Chinese the first glimpse of settled regions to the west of China. With a population of a million people, Bactria had a well-developed agricultural economy (based on wheat, rice and grapes) with 100 cities and a well-developed trading economy. A subsequent envoy was very surprised to find goods from southern China (outside of Han control) that had found their way to Bactria via India.

In 124 BC, Zhang Qian set out again to seek a new route to India that didn’t traverse Xiongnu territory. This time Kunming tribes he encountered in the Himalayas murdered most of his men.

Zhang Qian’s initial trip rip to the Central Steppes would lead to hundreds of Chinese expeditions per year to Central Asia. 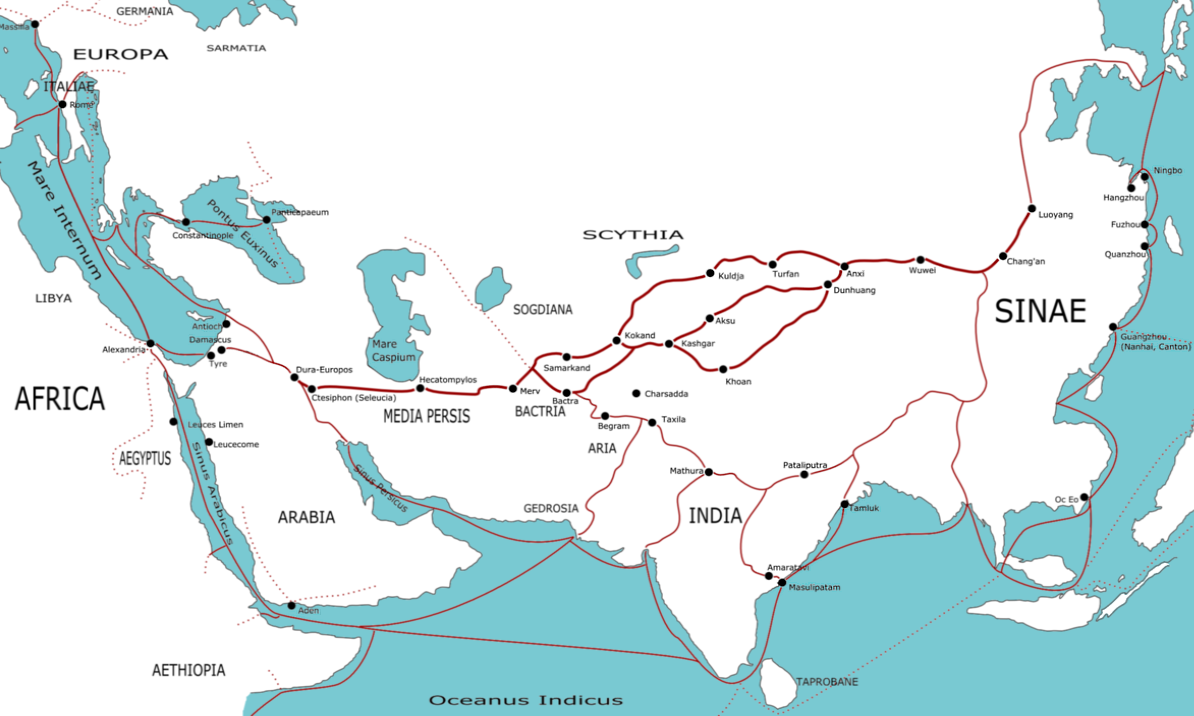 Episode 8 Trade Across the Tarim Basin*

He also discussed the complementary sea routes established by Mediterranean civilizations following the discovery of the monsoon trade winds in 116 BC. Egypt (run by the Ptolemys, a Greek dynasty) controlled the shipping around the Arabian peninsula to import silk from India.

In 31 BC, Rome secured the Mediterranean under the emperor Augustus. The Romans had an enormous appetite for Chinese silks and spices and gems from India.

*A desert area between the east Asian steppes and China, the Tarim Basin first came under Chinese control in the 1st century AD.

**The Jade Gate was a strategic Great Wall fort adjacent at the entry to the Ganzu corridor.

****Bactria was also a jumping off point for routes to India.