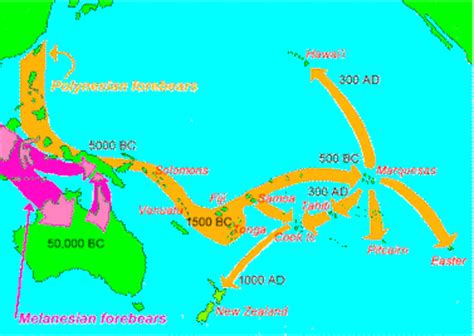 Episode 29: Lifeways of Australia and the Pacific

According to Benjamin, human beings first settled in Australia 50,000 years ago when Australia, New Guinea and Tasmania were still joined as a single continent. The first evidence of agriculture in Australasia dates back to 8000 BC in the highlands of New Guinea. Initially crops were limited taro and yams, but after sophisticated drainage channels were built around 5000 BC, residents were growing bananas, yams and sweet potatoes as well. According to archeological evidence they lived in small agrarian villages and engaged in art, religious rituals and warfare.

Indigenous Australians never adopted agriculture from their northern neighbors. As “affluent foragers,” they procured enough food via hunting, fishing and gathering. The Gunditjmara took an initial step towards agriculture by constructing ponds that entrapped eels. The aborigines in this region established permanent villages, social hierarchies and elaborate trade networks extending hundreds and thousands of miles.

In the Pacific, the Philippines and Solomon Islands were first inhabited around 40,000 BC. Around 2000 BC, people speaking Austronesian* languages began exploring and occupying other Pacific Islands. By 1000 BC, they had reached Vanuatu, New Caledonia and Fiji with canoes filled with obsidian tools; sophisticated fishing technology; ceramic pots; domesticated dogs, chickens and pigs and 15 plant species, including taro, yam and bananas. By 900 BC they had reached Tonga and by 700 BC Samoa.

The settlement of the Pacific islands relied on the invention of the triangular sail (which enabled a boat to against the wind) and the single and double outrigger canoes. Extremely skilled at using stars and tides to navigate, early Pacific Island settlers established giant trade networks extending 4,000 miles.

All these islands shared governance by hereditary chiefs and common religious and agricultural practices. They also share a common history of distant ancestors originating in Hawaitki (which Benjamin believes refers to Samoa and Tonga).

When the first Europeans arrived, Aotearoa (NZ) had a population of about 100,000, most settled in the North Island.

Rapa Nui had an extremely wealthy agrarian civilization prior to its collapse from deforestation. Under the rule of powerful chiefs they constructed as many as 70,000 carved stone statues, some weighing as much as much as 80 tons. Prior to the collapse of their complex agrarian society (which led them to revert to foraging), they developed their own written language.

Hawaii also had a very successful agrarian civilization supported by pigs, intensive irrigation, terraced gardens and aquaculture ponds. Some of the Hawaiian kingdoms that emerged were as large a Sumer’s city-states.

*The Austronesian language group is believed to have originated around Taiwan and spread first to the Philippines and the Bismarck Archipelago and from there to the more eastern Pacific Islands.

**Benjamin believes that early Rapa Nui settlers may have sailed their canoes 800 miles to Chile, explaining the presence of pre-Columbian sweet potato crops in Chile and Chilean chickens in Rapa Nui.

Can be view free on Kanopy with library card.