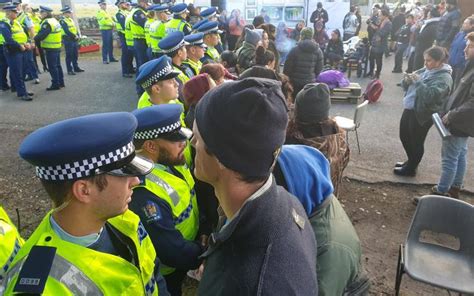 This three part documentary series describes a successful land occupation that successfully blocked (in 2020) the conversion of illegally confiscated Māori land into a private housing development. All three episodes can be viewed free at the Māori TV website.

Part 1 describes the history of Ihumātao from its first settlement by Māori 1,000 years ago. Owing to its volcanic soil, it became rich agricultural land, providing food for iwi throughout the North Island .

Organizers of the recent occupation describe the brutal 1863 eviction of their great grandparents from 11,000 acres by British troops to be sold to European settlers. Of the 11,000 acres, only 38 hectares remains undeveloped. Prior to 2015, it was publicly owned (by Auckland Council).

In 2015, local iwi began passively occupying the land when they learned that Auckland Council had declared it a  Special Housing Area (SHA) status without public notification. The 2013 SHA law (later repealed) allowed regional authorities to release rural land for development without going through the formal consent process.

Auckland Council subsequently sold the land to Fletcher Building after approving their proposal to build 520 houses.

For the first four years, occupiers pursued all legal avenues to stop the housing development and get their land returned. This included filing a claim under urgency with the Waitangi Tribunal;* filing petitions with Auckland Council, Mayor Phil Goff and Prime Minister Jacinda Ardern; and requesting the Māori Select Affairs Committee to intercede with the prime minister.

Part 2 begins when the police present the occupiers with an eviction notice in early 2019. Together with a large contingent of European supporters, they begin planning and training for a nonviolent occupation of the land.

On July 23, 2019, 100 cops show up to execute the eviction order, and hundreds of supporters from all over New Zealand arrive to support local iwi. While the adults focus on preventing police from closing the public road, children race through the adjacent paddocks adjacent to plant Tino Rangatiratanga flags atop the volcanic plateau central to the disputed land. Adult protestors respond by spilling out into the paddocks and pitching tents.

Part 3 describes how thousands of supporters continue to arrive from around the country, as well as sending blankets, warm clothes, firewood, food and money for the continuing occupation.

The Māori king visits the occupation in mid-2020 and agrees to mediate between iwi on different sides of the issue. After winning his support for their demands, they request that the government buy the land back from Fletcher’s and invite the prime minister to visit.

Although she declines the invitation, she agrees to stop the housing development from proceeding without formal negotiations to resolve the issue.

In December 2020, two months after the parliamentary election, the government agrees to buy Ihumātao from Fletchers and to establsh a Ropu Whakahaere to decide the future of Ihumātao. The Ropu will consist of a majority of Māori members from affected iwi, as well as Auckland Council and government representatives.

Although the occupiers have carried out extensive habitat restoration during the five-year occupation, the Ropu is given a mandate to “consider” housing.

*The Waitangi Tribunal is a New Zealand permanent commission of inquiry established under the 1975 Treaty of Waitangi Act. It’s charged with investigating and making recommendations on claims brought by Māori regarding confiscated land.

The series can be viewed free on the Māori TV website for the next few weeks.