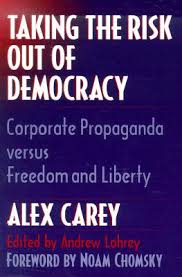 This is the first in a series of posts about “engineering consent,” a form of brainwashing and thought control perfected in the 20th century. Its purpose is to allow the elites who control western democracies to maintain political power without resorting to brute force.

Taking the Risk Out of Democracy: Corporate Propaganda versus Freedom and Liberty

Taking the Risk Out of Democracy: Corporate Propaganda versus Freedom and Liberty is a collection of essays written by Australian psychologist Alex Carey prior to his death in 1988. The essays were posthumously edited and assembled into a book by Andrew Lohey. Carey’s book details the 100 year history of the deliberate manipulation of popular consciousness by the corporate elite.

According to Carey, the main purpose of corporate social engineering is to persuade the voting public to serve the interests of the privileged class, rather than their own working class needs. This type of propaganda relies heavily on emotionally-laden symbols and a black and white view of society in which people and issues are either good or evil. Owing to virtually unlimited corporate financing, it’s spectacularly effective. Conservative regimes that enacted reactionary social policy (in the US) between 1919-1929, 1946-1956, and 1976-2014 didn’t just happen – they were deliberately engineered by the business lobby and corporate propagandists.

In the view of the US business elite, a dedicated program of social engineering became essential at the beginning of the 20th century when women and northern blacks acquired the right to vote. In 1880, only 10-15% of the US population was eligible to vote. By 1920, this percentage had increased to 40-50%. The corporate elite couldn’t take the risk that this large crop of new voters would elect candidates keen on regulating corporate activities that posed a threat to public health and welfare.

Edward Bernays, known as the father of public relations, played an instrumental role in advancing the art and science of corporate propaganda. During World War I, he assisted Woodrow Wilson, who ran as an antiwar president, in convincing a fiercely antiwar and isolationist American public to support US intervention in the war between Britain and Germany.

After World War I, Bernays worked for the National Association of Manufacturers and other corporate groups with a primary agenda of turning public opinion against unions, immigrants and the corporate regulation enacted by President Teddy Roosevelt between 1901 and 1912.

By combining a vast media campaign with concerted employee indoctrination, Bernays created a wave of anti-union and anti-immigrant hysteria. By convincing Americans that corporate regulation was akin to Bolshevism. In this way, he successfully ushered in the first (1919-1921) of three periods of corporate rule. While post-war Europe enjoyed a wave of radical liberalism resulting in the rise of democratic socialism, the US was caught in the grips of a reactionary agenda that would set the stage for the repressive Red Scare and Palmer Raids (in which politically active immigrants were rounded up and deported).

The other two periods in which a corporate agenda dominated US domestic and foreign policy occurred between 1946-1950 and 1976-80. Between 1929 and 1946, the Great Depression and World War II dramatically curtailed the effectiveness of corporate propaganda. In the late forties, corporate interest groups roared back with a vengeance. The ideological agenda they broadcast on radio and in print media equated free enterprise with freedom and democracy, patriotism with social harmony and the New Deal with creeping socialism. Liberals who supported corporate regulation were portrayed as communist sympathizers. During this period, the Chamber of Commerce launched the first major publicity campaign warning that communists had infiltrated government, universities and other major institutions.

Thanks to these propaganda efforts, in Republicans took control of Congress for the first time since 1928. In 1947 they enacted the Taft Hartley Act (1947), virtually paralyzing American unions. By blanketing the media with their reactionary agenda, pro-corporate ideologues also laid the ground work for the second Red Scare, aka the McCarthy Era from 1950-1956.

Senator Joseph McCarthy’s House Committee on Unamerican Activities had an even more destructive effect on foreign policy than it did on civil liberties. In addition to pressuring Truman to pursue an unwinnable war in Korea, McCarthy also forced Eisenhower to reverse US policy on Vietnam and China. Under Truman, the US State Department had opposed the French return to Vietnam (i.e. they supported Vietnamese independence). They had also sought to mediate (in 1945) between Mao Tsai Tung and Chiang Kai Shek in the Chinese civil war.

After McCarthy succeeded in stripping the State Department of more than 500 personnel with Asian expertise, the ultraconservative, CIA-linked John Foster Dulles succeeded in throwing US support behind the incompetent and corrupt Chiang Kai Shek and transforming French opposition to Vietnamese independence into a battle to prevent world Communist domination.

The Rise of Pro-Corporate Neocons

The American Institute for Public Policy Research (AEI) (neoconservative think tank founded in 1970), the Heritage Foundation (founded in 1973) and would be instrumental in promoting “economic” ideological beliefs that full employment and clean air and water initiatives are detrimental to the economy because they hurt business. These think tanks also hammered Congress and universities with the notion that the US would collapse under a socialist dictatorship unless corporate regulations were rolled back.

Their success in bombarding all sectors of society with these reactionary ideas would pave the way for Ronald Reagan’s election and the rollback of corporate regulation and social safety net programs that occurred during his administration.

During the early 1970s, these conservative think tanks began exporting these reactionary belief systems to British and Australian corporate interest groups. In Britain, American-inspired treetop and grassroots pro-corporate propaganda would lead to Margaret Thatcher’s election in 1979.

Below the 1993 documentary based on Noam Chomsky’s book Manufacturing Consent. The title is based on a term coined by Bernays: “engineering consent.” Carey had studied with Chomsky at MIT.

Loss of union protection is catastrophic for millions of American workers with no way to protect themselves against layoffs and wage, benefit and pension cuts. In 2013, only 11.3% of US workers belonged to unions. Many Americans are unaware of the deliberate 95-year campaign by Wall Street to destroy the trade union movement. It all started in 1919 when the National Association of Manufacturers engaged Edward Bernays, the father of public relations, to destroy public support for a steel workers strike. Following a brief rise in union activism during the Great Depression, it continued with the punitive 1948 Taft Hartley Act, the expulsion of militant unionists during the McCarthy Era, and the cozy cold war collaboration between the CIA and AFL-CIO bureaucrats. The most decisive blow would be the trade liberalization of the 80s and 90s and the wholesale export of skilled union jobs to third world sweatshops.

In his 1995 Taking the Risk Out of Democracy, the late Australian psychologist Alex Carey describes how the National Association of Manufacturers engaged Edward Bernays to launch a massive media campaign to reverse public support for steel workers striking for the right to bargain collectively. Bernays first got his start helping President Woodrow Wilson sell World War I to a strongly isolationist and antiwar American public. Following the war, Bernays was immediately engaged by major corporate clients that included Proctor & Gamble, CBS, the American Tobacco Company, Standard Oil, General Electric and the United Fruit Company.

Bernays is also regarded as the father of “consumerism,” the transformation of Americans from engaged citizens into passive consumers by bombarding them with thousands of pro-consumption messages. He was also instrumental  in convincing doctors and dentists (without a shred of scientific evidence) that disposing the industrial toxin fluoride in municipal water supplies would be good for peoples’ teeth.

His media campaign to convince the American public that striking workers were dangerous radicals, Bolsheviks and anarchists was an instant success. The anti-Red hysteria it created ushered in a decade of severe repression, enabling Bureau of Investigation J Edgar Hoover to launch a Red Scare and illegally arrest, detail and deport several hundred suspected radicals.

During the Great Depression of the 1930s, unions became popular again. Then, as now, corporations took advantage of high unemployment rates to cut wages, increase hours and force employees to work under unsafe sweatshop conditions. Led largely by the CIO (Congress of Industrial Organizations), organized labor fought back with scores of sit down and wildcat strikes.

The effect of the 1947 Taft Hartley Act on union membership was almost immediate. In 1946 the Congress of Industrial Organizations (CIO) had 6.3 million members. By 1954, when it merged with the AFL, this number was down to 4.6 million or 34.7% of the American workforce. This percentage steadily declined as union officials used the anticommunist hysteria of the McCarthy Era (1950-56) to expel militant trade unionists from their ranks. The original Taft Hartley Act included a provision preventing members or former Communist Party members from holding office in a labor union – which the Supreme Court struck down in 1965 as unconstitutional. .

Thanks to the Taft Hartley Act and the purging of militant grassroots unionists, a trade union bureaucracy arose that felt closer to management than the workers they supposedly represented. This stemmed, in part, from perks they received for delivering “labor discipline” (i.e. preventing disruptive industrial action). Thus instead of lobbying to repeal Taft Hartley and relying on well-organized rank and file and industrial action, union officials became more focused on “sweetheart deals” they made with managers.

According to former CIA officer Tom Braden, many AFL-CIO officers were also on the CIA payroll for their work with USAID in suppressing foreign unions with anti-US leanings. In 1967 Braden bragged about this in the Saturday Evening Post. Founded by prominent Wall Street lawyer Allen Dulles, the CIA has always played a major role in protecting Wall Street interests. They have a long history of overthrowing democratically elected governments that threaten US corporations with overseas investments (e.g. major oil companies and United Fruit Company and Coca Cola in Latin America).

With Reagan’s election in 1980, numerous trade laws protecting US industries and workers were repealed through the Caribbean Basin Initiative and the General Agreement on Tariffs and Trades. Clinton continued this process by fast tracking both NAFTA and the World Trade Organization treaty through Congress. Once protective quotas and tariffs were repealed, there was nothing to stop Wall Street corporations from shutting down thousands of US factories and reopening them as sweatshops in the third world. In the process millions of US workers lost union manufacturing jobs to take minimum wage jobs at MacDonald’s and Wal-Mart.

The loss of the US manufacturing sector has clearly played a major role in the failed recovery and declining US global influence. This seems an enormous price to pay for the sake of destroying trade unions. Our children and grandchildren, who will reap the consequences, will not look kindly on the neoliberal presidents (Reagan, Clinton, both Bushes, and Obama) who enacted these disastrous policies.