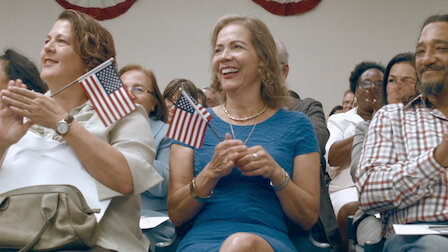 Amend: The Fight for America Episode 6

Episode 6 looks at the ongoing struggle of foreign immigrants seeking equal protection and due process guarantees of the 14th amendment. Following several court rulings extending 14th Amendment protections to non-citizens (including due process rights for immigrants entering the US illegally), President Clinton signed the Immigration Reform and Immigrant Responsibility Act of 1996. This law makes it legal to jail immigrants seeking asylum, as well as to deport people without a due process hearing.

The major weakness of this final episode is its failure to emphasize the historic role US corporations have played in promoting mass immigration to hold down wages.

The first example of this was the massive import of Chinese immigrant laborers in the mid-19th century to built the Trans-Atlantic Railroad. Once the tracks were completed in 1869, Chinese immigrants were less welcome. The 1871 Chinese Massacre in Los Angeles was one of the largest mass lynchings (with 19 killed) in US history.

Competition for scarce jobs grew during the 1880 economic depression only increased anti-Chinese sentiment. In 1882, Congress pass the first US immigration law, the Chinese Exclusion Act.* In the 1924 Immigration Act, Congress also established strict national origin quotas for immigrants from countries outside of Western Europe.

With the major industrial boom the US experienced in the early 20th century, US employers looked to roughly one million Mexican immigrants to fill labor shortages. When the bubble burst in 1929 (with the start of the Great Depression). the US deported upwards of 400,000 Mexican-Americans, even though 60% were US citizens. Following the recession of 1953, thousands more were deported under Operation Wetback.