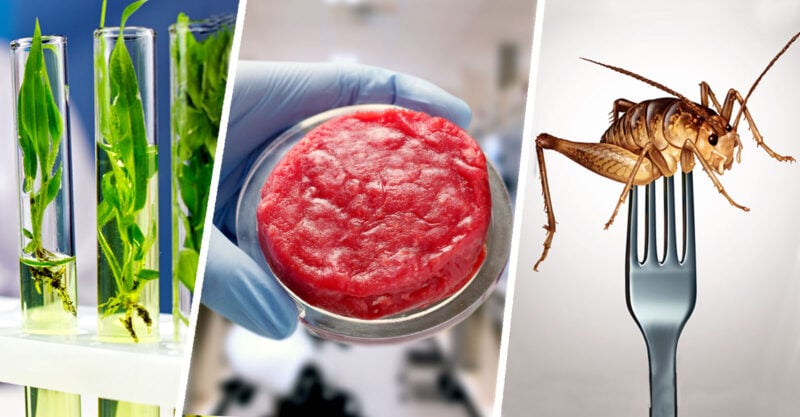 Journalist James Corbett identifies the cast of characters driving the Great Food Reset, a plan to reengineer the global food supply under the guise of a fake food crisis.

The world’s food supply is being reengineered under the guise of a fake food crisis, according to journalist James Corbett.

“From cricket powder dumplings and bug burgers to GMOs and glyphosate to bioreactors and designer microbes to nutrigenomics and 3D printed material, the future of ‘food’ is shaping up to be radically different from anything you’ve eaten before,” the author of the “The Corbett Report” said.

Food, Corbett noted a week earlier on his Substack, has been leveraged throughout human history as a “powerful tool of control.”

But it’s not too late to “start formulating our own plans for counteracting this agenda” of control, Corbett said.

What’s the first step? Look closely at who’s behind the agenda.

“In order to truly do something to derail the runaway train that is the Great Food Reset, we must first understand it. And in order to understand it, we have to know something about the people behind this agenda.”

Corbett provided an information-packed rundown of the groups and individuals he believes are the drivers — historically and today — of the Great Food Reset.

According to Corbett, the Rockefellers and their namesake foundation — who “are in many ways the progenitors and the architects of the Great Food Reset” — are pushing for further centralization of control over the food supply, including “a new, integrated nutrition security system.”

“From the beginning of the so-called ‘Green Revolution’ to the so-called ‘Gene Revolution,’ the Rockefellers have been there,” Corbett said, “helping to move things along with their ‘philanthropic’ donations.”

Corbett cited the Rockefellers’ recent work in Africa, which operates under the name Alliance for a Green Revolution in Africa. The alliance’s stated goal — to “elevate the single African voice” — “sounds nice and fuzzy, until you learn that 200 organizations have come together to denounce the alliance and its activities,” Corbett said.

Corbett said the 200 critics of the alliance “claim that the group has not only ‘unequivocally failed in its mission,’ but has actually ‘harmed broader efforts to support African farmers.’”

Corbett pointed out that Bill Gates, Sr., in 2009, admitted he had looked to the Rockefeller Foundation as an example to follow when he helped his son set up the Bill & Melinda Gates Foundation — so it comes as “no surprise” that Bill Gates is heavily invested in the Great Food Reset.

Gates is “literally invested” in the food reset through his financing of the fake meat industry, Corbett said.

“Miraculously, the Bill & Melinda Gates Foundation Trust was able to divest itself of its Beyond Meat stock right before the shares tanked in 2019,” Corbett said, adding, “The Gateses must be super-shrewd investors!”

Gates became the biggest owner of U.S. farmland in 2021.

“Gee, I wonder why someone who’s so obsessed with completely reengineering the food supply and making us dependent on the lab-grown synthetic food substitutes he funds would be buying up farmland?” Corbett said.

The World Economic Forum (WEF) is behind many different aspects of the so-called Fourth Industrial Revolution, including “Great Reset” food initiatives, Corbett said.

Among other goals, the WEF wants more people to eat more insects.

“[Klaus] Schwab’s desire to get humans off of traditional sources of protein and nutrients is very much a part of that Great Reset plan,” Corbett said.

Corbett told readers that a quick search of the word “insects” on the WEF website reveals the organization has been regularly spouting ideas such as, “5 reasons why eating insects could reduce climate change,” and “Insects could soon be appearing on restaurant menus in Europe.”

“The fat cats are now unwinding after their hard week at Davos,” Corbett said. “You can bet they’re not snacking down on cricket croquette or mealmoth flambé . . . though they may expect you to.”

The EAT Forum (Davos for Food)

Describing itself as the “Davos for food,” an organization called the EAT Forum — cofounded by the Wellcome Trust — says it is a “science-based global platform for food system transformation.”

Corbett pointed out that according to a Feb. 17, 2022, analysis by Dr. Joseph Mercola, the EAT Forum’s largest initiative — FReSH — aims to transform the food system as a whole and features project partners including Bayer, Cargill, Syngenta, Unilever and Google.

Corbett discussed a working paper — “Systemic Solutions for Climate Change Adaptation and Mitigation in Agriculture, Nutrition, and Food Systems” — released in 2022, by the U.S. Agency for International Development’s (USAID) Board for International Food and Agricultural Development in conjunction with “Feed the Future,” the U.S. government’s global hunger and food security initiative.

“The whole document is couched in the bland bureaucratic doublespeak of ‘equity,’ ‘inclusion’ and ‘sustainability,’” Corbett said. “But, if you know how to read between the lines, it isn’t hard to understand what the report is really saying.”

“USAID’s ‘leverage’ over developing countries — specifically referenced no less than 125 times — gives an insight into the Kissingerian food-as-a-weapon mentality that is the very basis of USAID and its mission,” Corbett said.

“The entire enterprise reeks of a neocolonial landgrab masquerading as ‘philanthropy’ — the kind of territorial taking that people in Africa and elsewhere have been warning about for decades.”

2 thoughts on “The ‘Great Food Reset’: Who’s Behind Plan to Reengineer the Global Food Supply?”