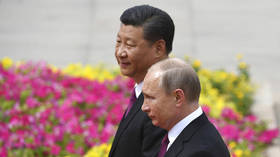 Foreign Affairs, a highly influential US magazine – effectively a US empire house journal – has published an article detailing how sanctions are quickly losing their efficiency as a weapon in Washington’s global arsenal.

Published by the Council on Foreign Relations NGO, Foreign Affairs provides space for officials within the US military industrial complex to communicate with one another on matters they believe to be of the utmost significance. Therefore, it is important to pay attention when the magazine makes major pronouncements on any issue.

It recently published an appraisal of US sanctions – the conclusion being that they are increasingly ineffective, have prompted Beijing and Moscow to create alternative global financial structures to insulate themselves and others from punitive actions, and that Washington and its acolytes will no longer be able to force countries to do their bidding, let alone destroy dissenting states, through such measures in the very near future.

The article begins by noting that “sanctions have long been the US’ favored diplomatic weapon,” which “fill the void between empty diplomatic declarations and deadly military interventions.” Despite this, it predicts “the golden days of US sanctions may soon be over.”

These “golden days” were the immediate post-Cold War era, when Washington was “still an unrivaled economic power,” and therefore could at the press of a button cripple each and every overseas economy, in theory. This was due to “primacy of the US dollar and the reach of US oversight of global financial channels.”

As international trade was overwhelmingly conducted using dollars, Washington could stop any country from exporting or importing any and all goods it wished, whenever it liked. Even then, Foreign Affairs recalls, US leaders themselves worried if sanctions were applied too liberally. In 1998, then-President Bill Clinton claimed his government was “in danger of looking like we want to sanction everybody who disagrees with us.”

The Foreign Affairs article says Clinton’s fears were “overblown,” but this is precisely what came to pass. Governments, and the countries they represented, have been sanctioned for pursuing the wrong policies, refusing to be overthrown in US-backed coups and military interventions and showing any degree of independence in their domestic or foreign dealings whatsoever. In the process, millions have died, and even more lives have been ruined for no good reason.

This approach has backfired, and badly. In response, states “have begun to harden their economies against such measures.” For example, after the US cut off Iran from the SWIFT global banking system, many other countries took note. Restricting China’s access to numerous technologies as part of the new Cold War has also served to place both Washington’s allies and adversaries alike “on notice their access to crucial technology could be severed.”

Beijing and Moscow lead the way in the push to create “financial innovations that diminish US advantage,” creating a raft of “currency swap agreements, alternatives to SWIFT, and digital currencies” that serve as “preemptive measures” against any “potential penalties” down the line.

Currency swaps, which connect central banks directly to each other and eliminate the need for trades between them to be dollar-backed, have been eagerly embraced by China. It has signed deals of this kind with more than 60 countries across the world, thereby enabling its companies “to circumvent US financial channels when they want to.”

In 2020, Beijing settled more than half its annual trade with Moscow in currencies other than the dollar, making the majority of these transactions totally immune to US sanctions, and that figure has only risen ever since. In March that year also, the China and Russia-led Shanghai Cooperation Organization officially prioritized development of payments in the local currencies of its members.

Beijing and Moscow are also, Foreign Affairs reports, “busily preparing their own alternatives” to various Western-dominated international systems. Their alternative to SWIFT, the Cross-Border Interbank Payment System, isn’t yet a match in terms of transaction volume, but that’s not the point. It prevents them, and any state or organization enrolled in the framework – 1,300 banks in over 100 countries already – from being unable to make international financial transactions, should they be cut out of SWIFT.

Similarly, China is expanding the reach of the digital renminbi, the currency issued by Beijing central bank, at home and overseas. More than 300 million of its citizens already use it, and a billion are forecast to by 2030. The currency is completely sanctions-proof as the US has no ability to prevent its use, and Beijing has encouraged several countries to pay for its exports exclusively using it – “other such deals will probably follow,” Foreign Affairs predicts.

The American empire’s obsessive reliance on sanctions has now created a Catch-22 situation, by the magazine’s reckoning. The already hostile relations between the USA, China and Russia mean Moscow and Beijing are pushing ahead with this revolutionary effort no matter what. If “things get worse,” they’ll simply “double down on their sanctions-proofing efforts,” taking more and more countries with them.

“These innovations are increasingly giving countries the ability to conduct transactions through sanctions-proof channels. This trend appears irreversible,” the article bitterly concludes. “All this means that within a decade, US unilateral sanctions may have little bite.”

It is all these developments, along with Moscow’s economic pivot eastwards after the 2014 Ukraine coup, and move towards self-sufficiency in energy and food and in other vital resources, which account for the embarrassing failure of US-led sanctions against Russia.

Western leaders, academics, journalists, pundits and economists promised when these sanctions were imposed that they would soon lead to Russia’s total political, economic and military collapse. They have not, demonstrating that elites in Europe and North America do not understand the global economy they claim to rule. They should get to grips with the new reality they inhabit in short order, though – for a multipolar world has begun to emerge in 2022, and it is here to stay.

3 thoughts on “Goodbye Empire? US Sanctions Failing in Face of Multipolarity”