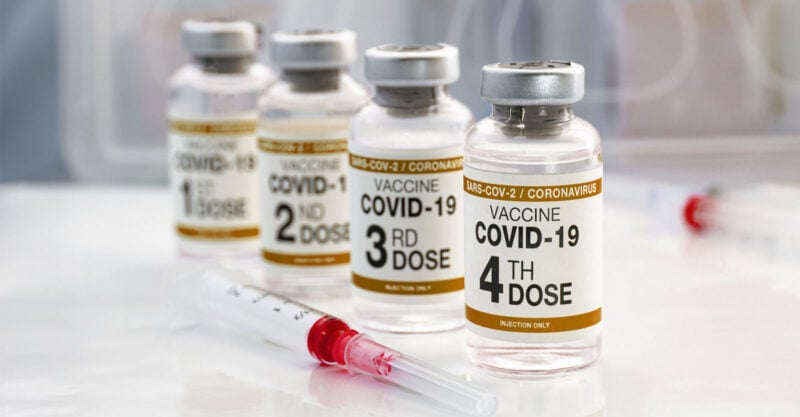 By  The Defender Staff

The Wall Street Journal Sunday took vaccine makers and federal agencies to task for pushing the bivalent COVID-19 boosters without having any data to demonstrate that they are either safe or effective. Today, the U.S. Food and Drug Administration said it is eyeing changes to the booster program.

The Wall Street Journal (WSJ) Sunday took vaccine makers and federal agencies to task for pushing the bivalent COVID-19 boosters without having any data to demonstrate that they are either safe or effective.

In an op-ed, Allysia Finley, a WSJ editorial board member, said people shouldn’t be surprised by the “deceptive advertising” touting the boosters on radio stations across the country, which is sponsored by the U.S. Department of Health and Human Services.

“Federal agencies took the unprecedented step of ordering vaccine makers to produce them and recommending them without data supporting their safety or efficacy,” she wrote.

Today, the U.S. Food and Drug Administration (FDA) posted a briefing document indicating it wants to change the COVID-19 vaccine protocols by simplifying the composition of the vaccines, the immunization schedule and decisions about how the vaccines are updated.

The FDA’s Vaccines and Related Biological Products Advisory Committee (VRBPAC) is scheduled to meet on Thursday to discuss the future of COVID-19 vaccine regimens, and will be asked to vote on whether they recommend parts of the FDA’s plan.

According to Finley, the idea behind the mRNA technology was that vaccine makers could quickly “tweak” the genetic sequences in the vaccines to target new variants. The bivalent vaccines targeted a combination of the original Wuhan strain and the BA.4 and BA.5 Omicron variants.

But, she wrote, three major scientific problems have emerged. First, the virus evolves faster than the vaccines can be updated.

Second, the vaccines have “hard-wired” people’s immune systems against the original strain, so they “churn out fewer antibodies that neutralize variants targeted by updated vaccines.”

Third, the antibodies that are produced wane quickly — within just a few months.

Finley outlined several recent studies as evidence, beginning with two studies in the New England Journal of Medicine (NEJM) showing that bivalent boosters did not produce significantly more neutralizing antibodies against the BA.4 and BA.5 variants than the original boosters.

The authors hypothesized that immune imprinting “may pose a greater challenge than is currently appreciated for inducing robust immunity against SARS-CoV-2 variants,” Finley explained.

In other words, a person’s first exposure to a virus shapes the outcome of subsequent exposures to antigenically related strains.

That means people who received the original vaccine were “primed” to respond to the Wuhan strain and “mounted an inferior antibody response to other variants,” as University of Pennsylvania’s Dr. Paul Offit explained in a NEJM article.

The findings contradict press releases from Pfizer and Moderna claiming the bivalent vaccines produced a response to the Omicron variants that was 4 to 6 times better than that of the original boosters.

Neither vaccine maker conducted randomized trials. Instead, “the vaccine makers designed their studies to get the results they wanted,” Finley said.

Despite the flawed studies, “public-health authorities didn’t raise an eyebrow,” Finley said, “but why would they? They have a vested interest in promoting the bivalents.”

In June 2022, the FDA told the vaccine makers to update the boosters against BA.4 and BA.5. They then rushed to authorize the bivalent boosters before clinical data were available, as The Defender reported.

The Centers for Disease Control and Prevention (CDC) also recommended the bivalents without any clinical trials.

Vaccine makers could have performed small randomized trials by the end of last September, but instead, public health officials rushed the vaccines, according to Finley.

In November, the CDC published a study finding that at peak efficacy — which waned quickly — the bivalents were only 22% to 43% effective against infection.

Another CDC study in December reported the bivalent booster showed high efficacy against hospitalization among boosted seniors relative to seniors who were unvaccinated or had the original booster.

But neither study controlled for confounding factors. And many experts, Finley said, “after zealously promoting the bivalents,” have criticized the studies.

Even the FDA seems to be backpedaling on its claims, she said.

“There’s a growing consensus that we need better vaccines and treatments to protect those still at risk. But we also need honest public-health leaders,” Finley concluded.

According to the FDA, only approximately 16% of eligible Americans over the age of 5 have received the bivalent booster.

Conceding many of the points Finley made, the agency said:

“Interpreting the data from these studies is complicated because of the limited sample size, the variability in the assays used and the status of assay qualification, the populations tested, and the intervals between vaccination and serum collection.”

It added, “Their [the boosters] deployment has been associated with significant implementation complexities.”

Despite this, the FDA concluded, “Both of the bivalent mRNA vaccines have been demonstrated to produce improved neutralizing antibody responses to the BA.5, BQ.1.1, and XBB variants as compared to the original vaccines.”

Yet, the report urged a shift in vaccine composition and delivery to “reduce complexity” in the process.

The new plan will recommend one yearly booster shot, although it recommends two doses of the shot for very young children and the elderly.

The FDA said it expects to assess the evolution of COVID-19 annually to determine which strains to vaccinate for, a process they likened to the one followed for the flu vaccine.

Experts, including Dr. Vinay Prasad, have already raised concerns about this approach, arguing that the vaccines will “always be chasing the last variant.”

Dr. Céline Gounder, a senior fellow at the Kaiser Family Foundation, today told NPR, “It’s unclear whether updating the booster formulations and repeatedly boosting people is the most effective approach to controlling COVID at this stage.”

“I’d like to see some data on the effect of dosing interval, at least observational data,” said Dr. Eric Rubin, one of the FDA advisers and editor-in-chief of the NEJM told The New York Times. “And going forward, I’d like to see data collected to try to tell if we’re doing the right thing.”

Despite conceding the failures of existing data, the documents don’t address the question of new randomized trials, existing and widespread concerns about vaccine side effects or the fact that the vaccines do not stop the spread of disease.