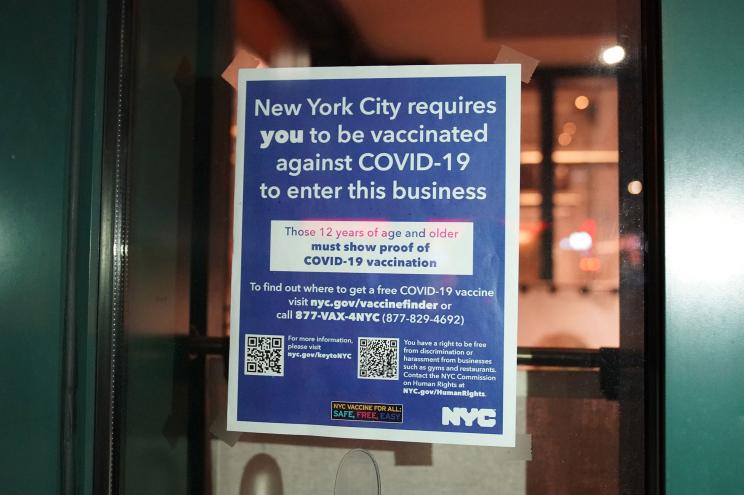 It’s little wonder “gaslighting” was Merriam-Webster’s 2022 word of the year. In New York City, gaslighting is the modus operandi of elected officials who proudly raise a fist for social justice but continue to deny citizens the most basic human rights when it comes to vaccines.

Unlike almost anywhere else in the country, unvaccinated parents here are still denied entry to their children’s public schools, and unvaccinated 2020 heroes are still fired, prohibited from working as educators, health-care workers, firefighters or any of the other essential jobs they fulfilled during the height of the pandemic.

This scandalous injustice persists despite a state-court ruling in October that also declared the city’s vaccine mandates arbitrary and capricious. The ruling cited CDC guidelines and the state Constitution, which says: “No person shall be denied the equal protection of the laws of this state or any subdivision thereof.” Mayor Eric Adams filed an appeal the very next day.

There are thousands of these unvaccinated, de facto second-class citizens, though many have now forgotten about them. Not even Thursday’s $250 million city workers’ lawsuit to end the mandates garnered much attention. Why the apathy?

Even now, when the majority of New Yorkers have declined a booster, acknowledging the inhumane treatment of the unvaccinated would require acceptance that we as a society allowed our elected officials to unleash these immoral mandates and launch a historic assault on civil rights. We did this to our friends, family, colleagues and neighbors.

As an unvaccinated New Yorker, I experienced the consequences of this groupthink firsthand. For months I was barred from cafes, theaters and museums with my children. Most painfully, I was kept from my daughter’s school spring concert and made to stand outside in the schoolyard and watch through an open back door.

In 2020 I was an essential food-industry worker, and, like many, I contracted COVID well before vaccines were available. After an uncomplicated recovery, I dared to wonder if I needed the experimental vaccine at all, then still in short supply for the vulnerable and only recently authorized for emergency use. After all, Dr. Anthony Fauci himself stated in 2004, “the most potent vaccination is getting infected yourself.”

The Centers for Disease Control and Prevention seemed to have no answers about natural immunity. Instead, we had to turn to other countries for information. In August 2021, Israel published a large-scale study showing that, indeed, immunity offered by natural infection far surpassed that offered by vaccines alone.

Incredibly, the groundbreaking study went ignored by both the CDC and New York City. Operation Gaslight was already in effect as a giddy Mayor Bill de Blasio forged ahead with his “Key to NYC,” the vaccine-passport template for the nation.

Lacking any basis in science, the “Key to NYC” became a cynical exercise in testing the public’s appetite for authoritarianism. Instead of riots in the street, blue posters denying entry to the unvaccinated plastered windows overnight. Some took glee in shunning and shaming fellow citizens, and the ugly fact that these mandates disproportionately affected low-income and minority communities went largely overlooked.

The pandemic revealed just how exploitable fear is. To this day I’m appalled at how few people stopped to question the validity of mandates or the unimaginable psychological and economical harms they might cause. In August, almost a year after the Israeli study on natural immunity was published, the CDC finally updated its COVID guidelines to no longer recommend that COVID-prevention measures be based on vaccination status. Yet Mayor Adams has yet to let them go.

What can we do when elected officials continue to gaslight with a brazen disregard for our civil rights? An arduous course of action is to take them to court. Many are doing just that. But it takes years and funds most do not have.

Alternately, we can refuse to comply. Like the uneven enforcement of the now-defunct private-sector mandate, it’s common knowledge among parents that some schools have, in good conscience, stopped enforcing these mandates. The courage of these principals should inspire brave action in all of us.

For those who mistakenly supported COVID vaccine mandates, now is the time to make amends. Call your City Council member, email the mayor, speak up to any institution still requiring proof of vaccination and demand a restoration of civil rights for New Yorkers. Let’s make “accountability” Merriam-Webster’s 2023 word of the year.