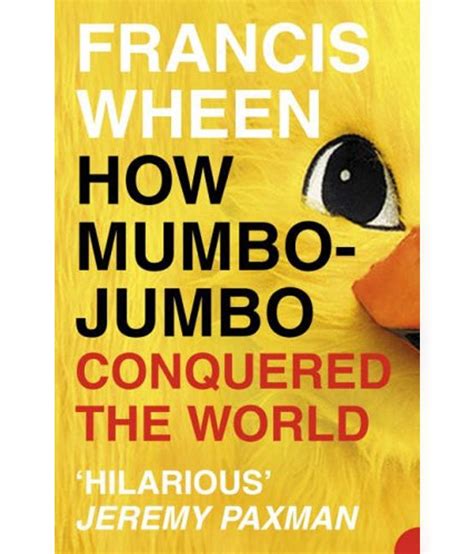 How Mumbo-Jumbo Conquered the World

I found this book by British journalist Francis Wheen extremely disappointing. After finishing it, I was still unclear what it was about until I read the author interviews at the back of the book. Wheen’s goal, apparently, is to demonstrate that “rational thought is in retreat.” However I remain baffled why he traces the problem back to 1979, the year Ayatollah Khomeini instituted a strict Islamic Republic in Iran (in March) and Margaret Thatcher became prime minister of Great Britain (in May).

I was also confused by Wheen’s humorous writing style. It seems to me a logical persuasive style would be far more effective in making the case that society has abandoned rational thought. Instead the book is filled with with flip one liners as Wheen slags off a host of modern leaders and opinion makers for their irrational behavior.

Wheen starts with the premise that one of the Enlightenment’s major achievements was replacing the superstitious religiosity of the Middle Ages with rational thought and science, opening the door to potential continuous improvement in the quality of human life. Yet ever since 1979, he maintains, the world has gone backwards and become more superstitious and irrational.

Coming in for particular ridicule and scorn are

For me the most valuable parts of this book concerned his critique of US economic and foreign policy. He presents a very coherent history of the disconnect between Wall Street share values and corporate profitability that began in the 1980s (around the same time US manufacturers began shutting down factories and moving them overseas) and reached its apex with the dotcom boom and the Enron (and WorldCom, Tyco and Global Crossing) scandal in the early 2000s. He also questions the ability of  the IMF, WTO and World Bank have so much power, particularly over Third World countries, yet operate with no vestige of public scrutiny or accountability. Also coming in for heavy criticism are the treaties the US imposes on developing countries forbidding them to subsidize developing industries (in contrast to the US, which heavily subsidized their early radios, telegraph, radio and Internet).

Unfortunately Wheen seems unaware of his own irrational biases when it comes to Western medicine, which he claims limits itself to treatments proven in double blind controlled studies. None of the 13 or so vaccines on the childhood immunization schedule has ever been subjected to double blind controlled studies (nor any of the Covid vaccines). At the same time, treatments such as Ayurvedic medicine and acupuncture, acupressure and reflexology (which he ridicules) are based on 3,000 years of empirical observation, which was so highly valued by Wheen’s Enlightenment heroes Bacon, Locke and Hume.