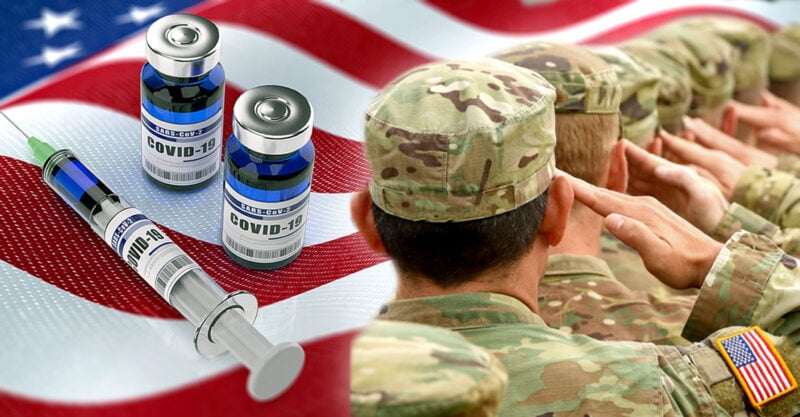 By The Defender Staff

The U.S. House of Representatives is expected to vote later this week to rescind the Pentagon’s COVID-19 vaccine mandate, after Republican lawmakers threatened to withhold votes for the $858 billion National Defense Authorization Act (NDAA) unless the bill included removal of the mandate.

The news was confirmed Tuesday night, according to The Washington Post, which also reported that Rep. Mike Rogers (R-Ala.), the ranking Republican on the House Armed Services Committee, said the removal of the vaccination requirement “was essential for the defense policy bill to move forward.”

The legislation must pass the U.S. Senate before heading to President Biden. Biden, who along with U.S. Defense Secretary Lloyd Austin opposes repealing the mandate, has not indicated that he will veto the bill, Politico reported.

The Pentagon would have 30 days to rescind the mandate of the bill passes as is.

According to The Hill’s “Rising,” Tulsi Gabbard, a politician and U.S. Army Reserve officer, slammed the mandate:

“I know people personally who have been kicked out of the military, some who have served 10 years, 20 years, 25 years, all because of this mandate that makes no sense and frankly is based on a lie that [Dr. Anthony] Fauci and others continue to propagate as they have throughout this whole thing, which is these vaccines will prevent you from catching COVID, that it will prevent you from spreading COVID.

“The fact that it is even a question at this point whether or not to lift this DOD [Department of Defense] mandate, and that Secretary Austin is opposing it is just absolute madness.”

The policy became a point of contention between Democratic and Republican lawmakers during NDAA negotiations, but in a joint statement Sens. Jack Reed (D-R.I.) and Jim Inhofe (R-Okla.), and Reps. Adam Smith (D-Wash.) and Mike Rogers (R-Ala.), said they were “pleased to announce we’ve come to a bipartisan, bicameral agreement on this year’s National Defense Authorization Act,” The Epoch Times Reported.

This bipartisan group made up of top members of the U.S. Senate Committee on Armed Services and the House Armed Services Committee, urged Congress to quickly pass the bill and Biden to sign it afterward.

‘Make no mistake: this is a win for our military’

Republicans celebrated the victory, but cautioned it is only “a first step,” and called on the Biden administration to reenlist the service members discharged under the policy, according to the Washington Post.

“Make no mistake: this is a win for our military,” House Minority Leader Kevin McCarthy (R-Calif.) said in a statement late Tuesday night.

“The end of the vaccine mandate for troops will be a big win, and it’s happening because conservatives stood strong for what we believe in and didn’t back down,” Sen. Mike Braun (R-Ind.) said.

The Democrats’ decision to compromise on the bill comes just days after the White House and Austin reiterated their support for the vaccine mandate.

“We lost a million people to this virus,” Austin told reporters Saturday, according to The Associated Press. “A million people died in the United States of America. We lost hundreds in the DOD. So this mandate has kept people healthy.”

John Kirby, White House National Security Council coordinator for strategic communications told reporters Tuesday, “The president actually concurs with the secretary that we need to continue to believe that all Americans, including those in the armed forces, should be vaccinated and boosted for COVID-19.”

But some Democrats agreed it may be time for the mandate to end. House Armed Services Chair Adam Smith told Politico last week that he was open to discussing an end to the mandate.

“I was a very strong supporter of the vaccine mandate when we did it, but at this point in time, does it make sense to have that policy from August 2021?” Smith asked.

“The politics on that have changed,” said Rep. Marc Veasey (D-Texas), another member of the Armed Services panel, according to The Hill. “If this were 2020, it would be a different story.”

The struggle isn’t over: ‘You can’t repeal without repair’

Republicans have called for an end to the military vaccine mandate since it was implemented in August 2021, citing concerns it would harm retention and recruitment of service members and negatively impact the readiness of the U.S. Armed Forces.

In September, a group of 47 Congress members wrote to Austin, urging the Pentagon to revoke the mandate, stating:

“The vaccine provides negligible benefit to the young, fit members of our Armed Forces, and the mandate’s imposition is clearly affecting the Department’s ability to sustain combat formations and recruit future talent.”

Last week, a group of 21 Republican governors wrote to congressional leaders again calling for immediate action to end the COVID-19 vaccine mandate for all members of the U.S. Armed Forces.

The letter summarized reports by military officials confirming that thousands of service members were discharged following the mandate and the National Guard and the Army missed their recruiting targets by 10% and 25% respectively.

A bloc of GOP senators, led by Sen. Rand Paul (R-Ky.) announced on Nov. 30 that they would stall the defense spending bill in the Senate if there was no vote to end the mandate and reinstate troops.

Paul said the mandate didn’t make sense because the vaccine doesn’t stop virus transmission and it creates an elevated risk of heart inflammation for young people. Many service members have also already had COVID-19, granting them a form of protection against reinfection and severe disease.

“You can’t repeal without repair,” Rep. Darrell Issa (R-Calif.) told Fox News Digital on Tuesday. “The repair has to be reinstating individuals who want to come back, correcting their records, allowing these individuals who have served honorably to be recognized that way.”

He said this issue will be a primary focus for the Republican House in January.

McCarthy also promised in a statement on Tuesday that when the GOP takes over the House next year, Republicans will “work to finally hold the Biden administration accountable and assist the men and women in uniform who were unfairly targeted.”