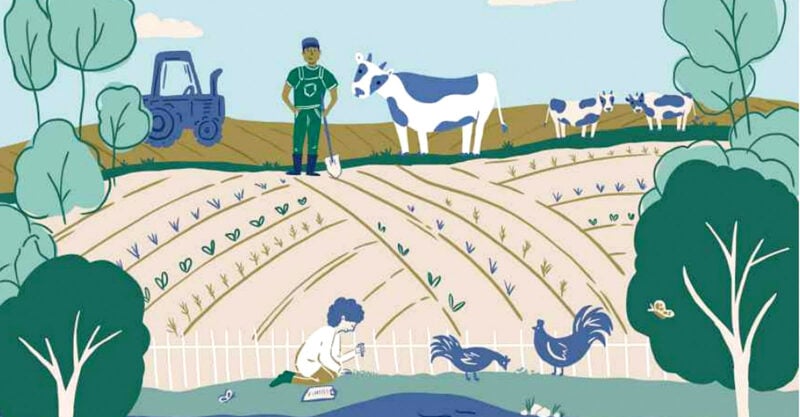 Organic systems achieve 3-6 times the profit of conventional production and 40% higher yields during stressful drought periods, according to the longest-running investigation comparing organic and conventional grain-cropping approaches in North America.

Beyond Pesticides reported in 2019 on similar results, from the institute’s 30-year project mark, which have been borne out by another three years of the trials.

The current report builds on results from the Farming Systems Trial that were shared in the Rodale Institute’s 2020 white paper, Regenerative Organic Agriculture and Climate Change: A Down-to-Earth Solution to Global Warming,” which integrated the newest research data and offered action steps for consumers, policymakers, farmers and others.

That report asserted that a global switch to a regenerative food system could not only provide sufficient food for the world’s population, reduce chemical exposures and improve biodiversity, but also, could be key to mitigating the climate crisis.

Through its longitudinal Farming Systems Trial, the Rodale Institute has collected data that measure differences in soil health, energy efficiency, crop yields, water use and contamination and nutrient density across test plots of grains grown in organic and conventional systems and using different levels of tillage.

The project focuses on grains (including wheat, corn, soy and oats) because they represent 70% of U.S. crops.

On its 12-acre Pennsylvania parcel, the institute’s Farming Systems Trial uses 72 experimental plots, across which are applied three broad approaches:

To what to attribute these demonstrated benefits of organic over conventional approaches? All these results, as Beyond Pesticides and the Rodale Institute have asserted for decades, begin with soil health.

“Healthy soil is that which allows plants to grow to their maximum productivity without disease or pests and without a need for off-farm supplements.

“Healthy soil is teeming with bacteria, fungi, algae, protozoa, nematodes, and other tiny creatures. Those organisms play an important role in plant health [by helping plants fight diseases and pests].

“Soil bacteria produce natural antibiotics that help plants resist disease. Fungi assist plants in absorbing water and nutrients. Together, these bacteria and fungi are known as ‘organic matter.’ The more organic matter in a sample of soil, the healthier that soil is.”

And because organic systems don’t use chemical inputs, toxic compounds are not deployed into the environment, and fewer fossil fuels are used (because synthetic pesticides and fertilizers are derived from petrochemicals).

The metrics used to determine a soil’s health include: the number of microorganisms present in the soil; the ability of the soil to retain water during drought or dry periods; the number and variety of nutrients present and the quantity of carbon the soil is able to hold.

By contrast, a more conventional view of soil sometimes sees it as little more than an “empty matrix” to which (chemical) inputs are added so that plants can survive, rather than as a living, evolving and interactive ecosystem that provides a rich growing environment for plants and many other life forms.

The Farming Systems Trial stands out as a singular research approach for multiple reasons, but chief among them is its longevity.

The Rodale Institute explains, “Short-term studies that take place over only a few years can’t measure longer-term weather effects, like drought, that will inevitably occur, or biological changes to the soil, which can happen slowly. We need long-term studies to find real solutions to problems affecting the future of global food production.”

These results were good news three years ago; they emerge as even more important as the world grapples with a constellation of intersecting environmental and health crises.

Many of those are related to the use of synthetic pesticides and fertilizers, and are showing up as degraded soils, biodiversity loss, widespread chemical pollution and compromised human and ecosystem health.

These toxic compounds also play a role in the exacerbation of the climate crisis. These realities challenge governments, institutions, businesses and human populations to change “business as usual.”

Yet we must change, and must influence decision-makers at every level and in every institution if we are to rescue the future of human life on the planet.

Regeneration International has issued a dire warning: at current rates of soil destruction — via erosion, desertification, decarbonization and chemical pollution — public health will be seriously damaged within 50 years.

Soil scientists are predicting, the organization says, health damage from a food supply with reduced nutritive value (including loss of important trace minerals), as well as no longer having “enough arable topsoil to feed ourselves.”

“Without protecting and regenerating the soil on our 4 billion acres of cultivated farmland, 8 billion acres of pastureland and 10 billion acres of forest land, it will be impossible to feed the world, keep global warming below 2 degrees Celsius, or halt the loss of biodiversity.”

Regenerative organic agriculture has a potentially enormous role to play in the needed changes to business as usual in the agricultural sector, according to the Rodale Institute.

Regeneration International defines such agricultural practices as “farming and grazing . . . that, among other benefits, reverse climate change by rebuilding soil organic matter and restoring degraded soil biodiversity — resulting in both carbon drawdown and improving the water cycle.”