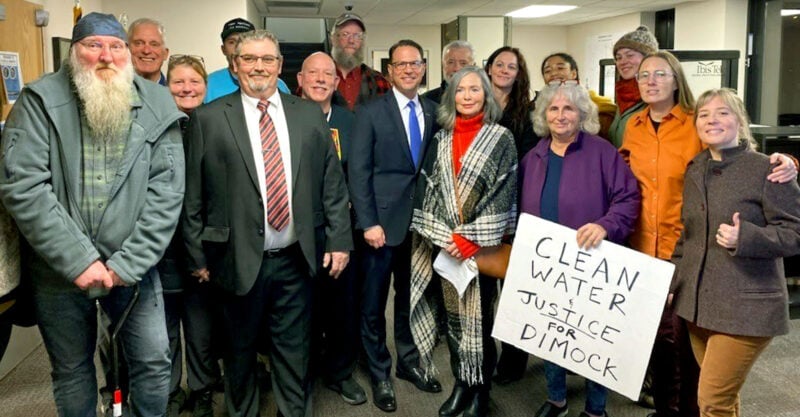 Coterra Energy (formerly Cabot Oil & Gas), the gas-drilling company made famous by the documentary “Gasland,” will pay $16.29 million to connect the homes of residents in the rural Pennsylvania community of Dimock to a clean water source.

The gas-drilling company made famous by the documentary “Gasland” will pay $16.29 million to connect the homes of residents in the rural Pennsylvania community of Dimock to a clean water source. The company also will pay the residents’ water bills for 75 years.

In a landmark decision announced Tuesday, Houston-based Coterra Energy (formerly Cabot Oil & Gas) pleaded no contest to a slate of criminal environmental charges. The deal culminated 14 years of frustration and uncertainty for hundreds of residents in rural northeastern Pennsylvania.

In Pennsylvania, a no-contest plea means the company has accepted criminal responsibility.

Pennsylvania Attorney General Josh Shapiro, who announced the plea deal, filed the original charges against the drilling company in June 2020, after a grand jury investigation found the company’s gas wells were “faulty,” resulting in flammable methane leaking into aquifers in Dimock and the surrounding area.

In what The Associated Press described as “one of the most prominent pollution cases ever to emerge from the U.S. drilling and fracking boom,” prosecutors and local residents claimed that not only did the company’s fracking activities pollute the community’s groundwater, but that Coterra tried to evade responsibility.

Despite the company’s claims that the gas in local groundwater was “naturally occurring,” the company faced — and ultimately pled no contest to — charges that included the illegal discharge of industrial wastes and unlawful conduct under Pennsylvania’s Clean Streams Law.

“I visited Dimock in 2010 and watched fires come from people’s faucets while the gas companies were denying everything. A dozen of the activists who hosted my visit have since died of cancer and other diseases that are plausibly related to contamination.

“I’m grateful for this victory and Attorney General Josh Shapiro for standing up to the fracking industry. This is the first time that an active driller has ever been held responsible for poisoning water and ruining people’s lives.”

Wenonah Hauter, executive director of Food & Water Watch, applauded the deal, but also called on elected officials to do more.

“After more than a decade of glaring inaction from state and federal leaders, finally the people of Dimock have a measure of justice thanks to the work of Attorney General Shapiro,” Hauter said.

The plea deal includes a plan to deliver “a clean, reliable supply of drinking water” to the affected area. The plan stems from tests that were ordered by the Pennsylvania attorney general’s office for dozens of homes in the region.

Affected residents were briefed on the plan Nov. 21. Pennsylvania American Water will drill two wells — a “public groundwater system” — and a treatment plant that will remove contaminants from the water. The water will be piped to approximately 20 homes.

The grand jury in 2020 was critical of the company’s “long-term indifference to the damage it caused to the environment and citizens of Susquehanna County,” where many residents used bottled water, bulk water purchased commercially, or water “drawn from creeks and artesian wells” instead of their own well water.

Troubles for the residents of Dimock — about 150 miles north of Philadelphia — and the surrounding area began Sept. 11, 2008, according to Stevens.

“That’s when Cabot Oil & Gas was drilling, fracking vertical wells, and they had three private water wells go bad in a 24-hour period. That was 14 years ago,” said Stevens.

An exploding water well caught the public’s attention, as did reports by area residents of symptoms such as dizziness, rashes and vomiting, which they blamed on their well water.

Awareness of the events in Dimock soon spread beyond the boundaries of this rural area. The Emmy Award-winning documentary “Gasland,” released in 2010, showed residents of the region setting their tap water on fire.

Stevens told The Defender he called the Pennsylvania attorney general’s office “every week for seven-and-a-half years, from the time I moved here in 2010, until 2017.”

During that entire time, he got no response, until Shapiro — the current attorney general and governor-elect of Pennsylvania — entered office.

“[Shapiro] offered Ray Kemble and myself to go to Harrisburg back on May 4, 2017, to present our case to the Environmental Crimes Division, which we did. They gave us three hours that turned into five.

“Those five hours turned into the largest investigation of environmental crimes in the history of the Commonwealth of Pennsylvania. And that turned into, I believe, six grand juries. We know of three or four already, but there might be another couple more. One of the grand jury presentations was about Cabot Oil & Gas harming and destroying the water of the people in Dimock.”

Pennsylvania American Water, the firm that will develop a new “public groundwater system” as part of the plea agreement reached with Coterra Energy, previously was involved in Pennsylvania’s abandoned efforts to connect Dimock residents to an existing municipal water system from a nearby town, approximately six miles away.

This changed, however, when a new governor took office in Pennsylvania in 2011, Republican Tom Corbett.

“When he was sworn in, he basically told the DEP [Department of Environmental Protection] secretary that if you build it [the water pipeline], he would tear it out. He wasn’t kidding. They knew he wasn’t kidding.

“By Nov. 30, 2011, he had the water deliveries stopped, even though the groundwater was still bad. As governor, he ordered the DEP to stop delivering water or having Cabot deliver water.”

The solution later proposed by Cabot and state prosecutors was far different — and less expensive. Cabot agreed to pay residents $4.1 million to install individual water treatment systems in each affected home, as part of a settlement between the state and Cabot.

The settlement, however, was “struck without residents’ input or consent” and “infuriated those who had made it clear they did not trust Cabot with their water,” even though “many residents took the money — and the treatment systems.”

According to many residents who accepted this deal, the systems never worked properly, forcing them to go back to purchasing water or having it delivered to their homes as before. As a result, they rejected a December 2021 proposal by the attorney general’s office that the company pay for replacement treatment systems.

Highlighting the lack of functionality of the treatment systems, water tests showed high levels of methane, an explosive gas that can cause asphyxiation. Bacteria were found in the water in other homes, with an expert biochemist reporting that the natural gas created conditions where bacteria “could survive and proliferate.”

In addition to methane and bacterial contamination, Stevens says that the gas — and therefore the groundwater — in the Dimock area also contains radon.

‘This stuff is poison,’ but federal environmental agencies took no action

In the midst of all of the above, federal agencies came to the region, but did not acknowledge that there was any problem or any dangerous threat to public health or local residents.

“We got the ATSDR [Agency for Toxic Substances and Disease Registry] and the EPA [U.S. Environmental Protection Agency] involved,” Stevens said. “We got them to come in. Barack Obama’s EPA came in. They spent six months living in Dimock, and they tested 63 private water wells. And every month, they declared there was no problem … they kept saying ‘oh, the water is great.’