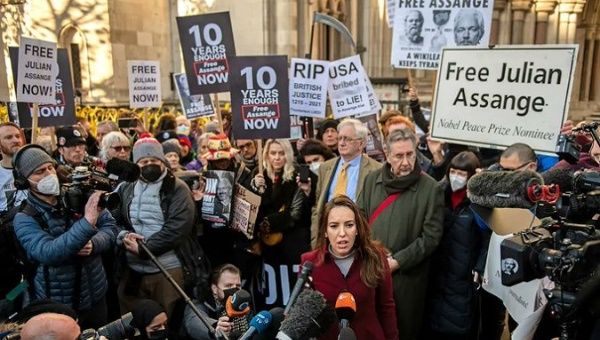 “Holding governments accountable is part of the core mission of a free press in a democracy,” the New York Times and European media said.

Through a joint letter published on Monday, The New York Times, The Guardian, Le Monde, Der Spiegel, and El Pais asked the United States to the Espionage Act charges against Julian Assange because it undermines press freedom.

Twelve years ago, those American and European media released excerpts of the revelations obtained in 250,000 documents, which were leaked to WikiLeaks by the then American soldier Chelsea Manning. Following that leak, Washington began proceedings to indict Assange under legislation designed to put World War I spies on trial.

“Publishing is not a crime,” said those outlets, emphasizing that Assange’s prosecution under the Espionage Act sets a dangerous precedent and undermines the U.S. First Amendment.

“Obtaining and disclosing sensitive information when necessary in the public interest is a core part of the daily work of journalists… If that work is criminalized, our public discourse and our democracies are made significantly weaker,” the letter stated.

The CIA plan to murder Julian Assange and the fight to free him | @DoubleDownNews #FreeAssangeNOW #Cablegate pic.twitter.com/8LTjMwQtfx

Assange has been imprisoned in the Belmarsh prison in London since 2019, when he was arrested at the Ecuadorian embassy where he had been a refugee for seven years.

Former British Home Secretary Priti Patel approved his extradition to the United States in June, although Assange’s lawyers are appealing such a decision.

The British newspaper The Guardian recalled today that the administration of President Barack Obama (209-2017) did not prosecute the WikiLeaks founder for the 2010 leaks because of the precedent that such action would set.

“Holding governments accountable is part of the core mission of a free press in a democracy,” the letter said.