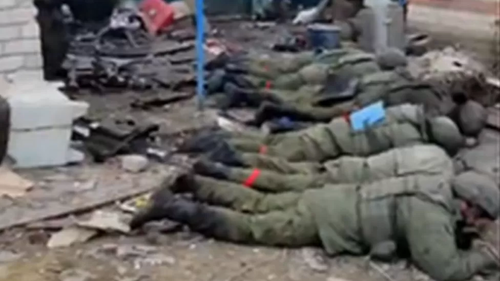 The New York Times has in an extremely rare moment (or perhaps more like unprecedented) conducted an in-depth visual investigation of a likely war crime against surrendered Russian troops conducted by Ukrainian forces. Multiple videos from different angles, including drone footage, emerged last week showing the incredibly disturbing scenes as Ukrainian forces were recapturing the village of Makiivka in the Luhansk region.

The videos show ten apparently unarmed Russian soldiers lying facedown on the ground, who early on are seen moving and in a position of surrender as at least four Ukrainian troops stand nearby outside of a house in a farmyard.

By the end of the footage, eleven Russians had been shot dead at close range, in what Russia says was a summary execution of people who at that point (based on their surrender) effectively become non-combatants based on accepted international laws of war.

The Russian Defense Ministry has said the videos confirm “deliberate and methodical murder” of its soldiers by the Ukrainian side, also with the Russian Foreign Ministry calling the act “merciless” and “shocking”.

Surprisingly, the videos were initially made public by Ukrainian news sources and soldiers themselves, and were shared widely on social media, as they purportedly showed the ‘heroism’ of Ukrainian soldiers as they clawed back territory in eastern Ukraine.

But The New York Times described, “The videos show the grisly before-and-after scenes of the encounter earlier this month, in which at least 11 Russians, most of whom are seen lying on the ground, appear to have been shot dead at close range after one of their fellow fighters suddenly opened fire on Ukrainian soldiers standing nearby.”

The United Nations has called for a formal investigation into the videos, with a statement from the UN Human Rights Office quoted in Reuters saying, “We are aware of the videos, and we are looking into them.”

“Allegations of summary executions of people hors de combat should be promptly, fully and effectively investigated, and any perpetrators held to account,” the statement continued, in reference to people legally designated “outside of combat”.

The Times report details the sequence of events beginning as follows:

The report comments that soon after the Russian soldiers emerge from the building, it is clear that an orderly surrender has taken place, with many of the prone Russian solders moving around on the ground after giving up their arms, clearly alive.

But soon after the entire scene turns to carnage:

By the time the dust settles, all of the Russian soldiers – and not just the gunman who emerged from the outhouse – lie dead, apparently shot in the head at close range, pools of blood forming around them.

“The video ends and it’s unclear what happens next. But a second aerial video of the location shows the bloody aftermath,” the NYT writes. “The Russian soldiers are lying motionless, apparently dead, most of them positioned as they were when they surrendered. Blood is pooling around them, and some appear to be bleeding from the upper body or head. The soldiers are dressed in the same uniforms with the distinctive red straps and blue marking.”

The footage, as well as the NY Times’ confirmation of the event, is now going viral inside Russia, causing fury and an angry denunciations, while at the same time Ukrainian officials have suggested the initial surrender had been “staged” by the Russian side in order to set a trap for the Ukrainian soldiers. Kiev has rejected the charges of war crimes from Moscow.

Russia has consistently complained that the West routinely ignores clear evidence of Ukrainian war crimes, while only putting Russian forces under the microscope. This NY Times investigation is an almost unprecedented moment where the “paper of record” is actually hinting that the Kremlin has a valid point.