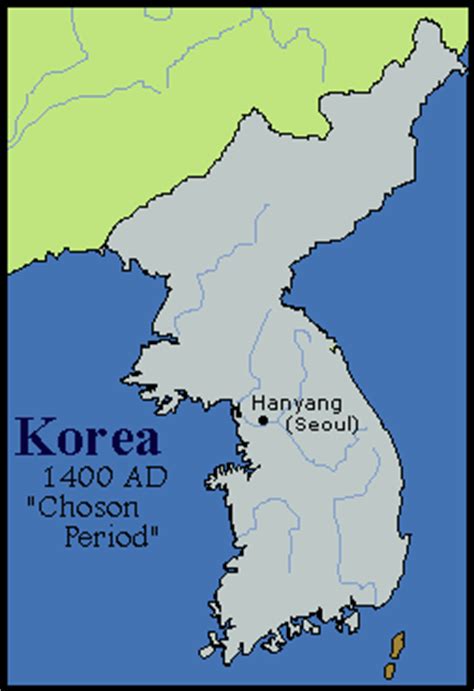 By the mid-14th century, the Koryo puppet dynasty was ending, as the Mongols withdrew from Korea, China and elsewhere in East Asia. In 1392, Yi Seong-gye overthrew the Koryo Dynasty and proclaimed the Choson Dynasty. The latter ruled until Japan occupied Korea in 1910.

Creating a neo-Confucian state, the Choson significantly expanded Korean territory and attacked Buddhism as being detrimental to families. The Yangbang, consisting of elite Confucian scholars,[1] created a Hall of Worthies, bureaucrats who shared power with the military and emperor in a constitutional monarchy.

By 1800, the Yangban constituted approximately 30% of the population. Approximately 30-40% consisted of slaves[2] or lowborn peasants and the remaining 30-40% commercial farmers, artisans, craftsmen and textile workers.[3] Under Choson Confucianism, women had very low status, with fathers, husbands and sons making all their major life decisions.

All land belonged to the government, and farmers paid a 10% tax for the privilege of using it. This was in addition the tax they paid to land owners and the sales tax they paid on all manufactured goods.

The Choson scholar emperor Sejong (1397 – 1450) placed major emphasis on art and science. This translated into a number of new inventions, including the rain gauge, the wind sock (measuring wind direction and velocity), the surveyor rod, various astronomical calendars and clocks and the Hangal alphabet.[4]

Beginning in the 18th century, the Sirhak or “practical learning” movement, facilitated renewed technological innovation and an increase in manufacturing, shifting the center  of technological progress from China to Korea and Japan. Inspired by innovations the Jesuits introduced to China, Korean scholars studied planetary movements to produce a more accurate calendar. They also invented a new kind of pulley.

Eventually applied to political science as well, Sirhak-based land and social reform would eventually replace Confucianism. With French missionaries active throughout the Korean peninsula, there was a brief increase in conversions to Catholicism. Government persecution forced the Yangbang elite to turn away from Catholicism, although farmers and artisans continued to be drawn to its egalitarian teachings (eg that all human beings are children of God).

[1] Only members of the second rank Yangban were allowed to take the Confucian civil service exam.

[2] Slavery was hereditary under the Choson Dynasty. There were both privates slaves, who could be inherited as private property, and government slaves. Private slaves were allowed to own property and buy their way to freedom. In 1801 all government slaves were emancipated, and all slavery was abolished in 1894.

[3] Under the Choson, the rapid emergence of cotton led to a thriving household textile industry.

[4] Hangal script didn’t come into wide use until the 20th century, as Korean Confucian scholars continued to write in classical Chinese.