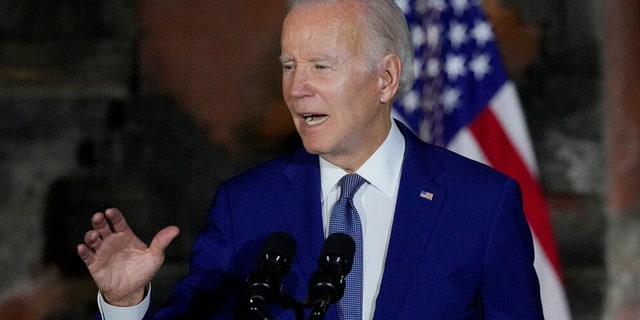 EXCLUSIVE: Senate Republicans are demanding that the White House pause all federally funded gain-of-function research, which they say may have been responsible for the outbreak of the COVID-19 virus, according to a letter obtained exclusively by Fox News Digital.

Five senators sent a letter to Dr. Arati Prabhakar, the director of the White House’s Office of Science and Technology Policy, on Tuesday, detailing a need to further evaluate the risks of gain-of-function research, which often includes intentionally altering viruses to be more pathogenic or transmissible as a means to develop preemptive treatments for deadly diseases.

The former Obama administration paused new funding of gain-of-function research in 2014 to “assess the potential risks and benefits.” However, it was reinstated by the National Institutes of Health (NIH) in 2017, and the senators argue in their letter that a pause is again necessary after the recent COVID-19 outbreak, which they say may have originated from a lab in Wuhan, China.

The NIH funded gain-of-function research at the Wuhan Institute of Virology, according to government documents obtained by The Intercept. The story countered claims from Dr. Anthony Fauci, the head of the National Institute of Allergy and Infectious Diseases (NIAID), and Dr. Francis Collins, who was the head of NIH at the start of the pandemic. Medical experts noted that this NIH-funded gain-of-function research in Wuhan, where the virus first spread, could not have directly caused the COVID-19 outbreak but leads reason to believe the lab lacked proper oversight and engaged in risky research.

Fauci, who announced in August that he will step down from his position in December, spoke at a White House press briefing Tuesday for what he said would be the last time, and he encouraged Americans to get additional COVID-19 vaccine boosters. Fauci added that he would testify to Congress if there are investigations launched into the government’s handling of the pandemic. Several reporters attempted to ask Fauci about the origins of COVID-19 at the briefing but were shut down by White House press secretary Karine Jean-Pierre.

NIH admitted last year that the organization it funded for research in Wuhan, EcoHealth Alliance, failed to immediately report an “unexpected result” from its research in 2018 and 2019 that created a coronavirus that was more infectious in mice. The agency terminated the subgrants to Wuhan in August after a two-year investigation. Previous government-funded studies in Wuhan included funds from Fauci’s NIAID on bat coronavirus research.

The senators note that in January 2020, NIH asked the National Science Advisory Board for Biosecurity to propose considerations on how to increase public transparency for “research involving enhanced potential pandemic pathogens.” Medical experts, they add, have testified to the Senate that more oversight on gain-of-function research is needed.

“As the advances in biotechnology have made research exceedingly more dangerous, increased protections and regulations have become more necessary. The COVID-19 outbreak has been devastating, and until clear ePPP research policies are implemented, it is critically important for the [Office of Science and Technology Policy (OSTP)] to immediately institute increased protections for the public from these potentially lethal pathogens,” the lawmakers write.

“The OSTP can implement safeguards today to prevent the possibility of an American-based viral outbreak by issuing a new government-wide moratorium on [gain-of-function] studies involving enhanced pathogens of pandemic potential,” they write in the letter.

The Senators also called on NIH to properly enforce the Stevens Amendment, which requires federal grantees to disclose the exact amount of federal funds utilized. The Government Accountability Office concluded in 2019 that agencies have consistently failed to ensure their grantees comply with the amendment.

Boston University recently used federal funds to insert an Omicron SARS-CoV-2 variant into a deadlier coronavirus strain, which the NIH said it was not told about in advance.

Another group of Republican lawmakers have asked Boston University for all proposal and progress reports related to the study, each of the NIH grants referenced in the study, a list of all funding streams for the study and a copy of the university’s safety protocols. They are also questioning whether the research needed to be approved by the NIAID.

However, the university claims it did not use NIH funds directly in the study. A spokesperson told Fox News Digital that the research was not gain-of-function and made the virus “less dangerous.”