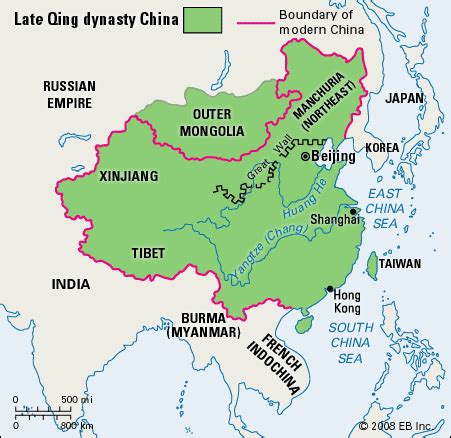 Episode 37: The Qing: Nomads Return from the North

During the early 17th century, warring Manchu tribes [1] became unified into a single confederation under Nurhachi. After expelling the Ming from Manchuria, they proceeded to conquer parts of North Korea and eventually (in 1644) Beijing. Numerous Han generals, who detested the corrupt eunuchs running the country, defected and facilitated the Manchu conquest. Nurhachi’s son Dorgon declared himself the first Qing emperor, though it would be 40 years before southern China would be fully integrated.

Viewing their main duty as looking after their subjects, the Qing Dynasty ruled according to Confucian principles. Although they outlawed Han Chinese from intermarrying with Manchu or traveling to Manchuria, they used a well-organized central bureaucracy to ensure effective and peaceable management of a majority Han population.

Some Han loyalists fled or were exiled to Taiwan. Moreover there was active burning and suppression of books concerning frontier or defense problems or hostile to the notion of nomadic rulers.

China experienced its greatest military expansion under the Qing dynasty, with Tibet becoming a protectorate and Vietnam and Nepal becoming vassal states. The Qing stationed military garrisons as far west as Turkistan and encouraged merchants to settle there to help spread Chinese language and culture. Qing expansion into Central Asia brought Uighurs, Kazakhs, Kyrgyz and Mongols under Chinese control. It also led to border conflicts with Russia over the Amur River Valley.[2] Although the Qing failed in their attempt to conquer Burma, they eventually conquered Taiwan in 1683.

One major weakness of Qing rule was the relative absence of industrial expansion Europe was experiencing. Although only 11% of China’s terrain is suitable for farming, agriculture remained the primary base its economic wealth.

Even though Chinese agriculture (according to Benjamin) was the most successful preindustrial farming system,[3] poupation growh began to outstrip food production as 19th centry Qing emperors became more focused on their harems and hunting and began delegating their power to their eunuchs. Food shortages were aggravated by various Qing laws forbidding maritime activity and restricting international trade.

Qing rulers clearly favored stability over innovation, which they feared might lead to unsettling political change. Skyrocketing population growth made labor so cheap, they had no incentive to invent labor saving machines or even canon and firearms, which the Qing military could easily import them from Europe.

[1] Manchu were descended from Jurchen nomads who adopted sedentary lifestyles after migrating to modern day Mancuhria.