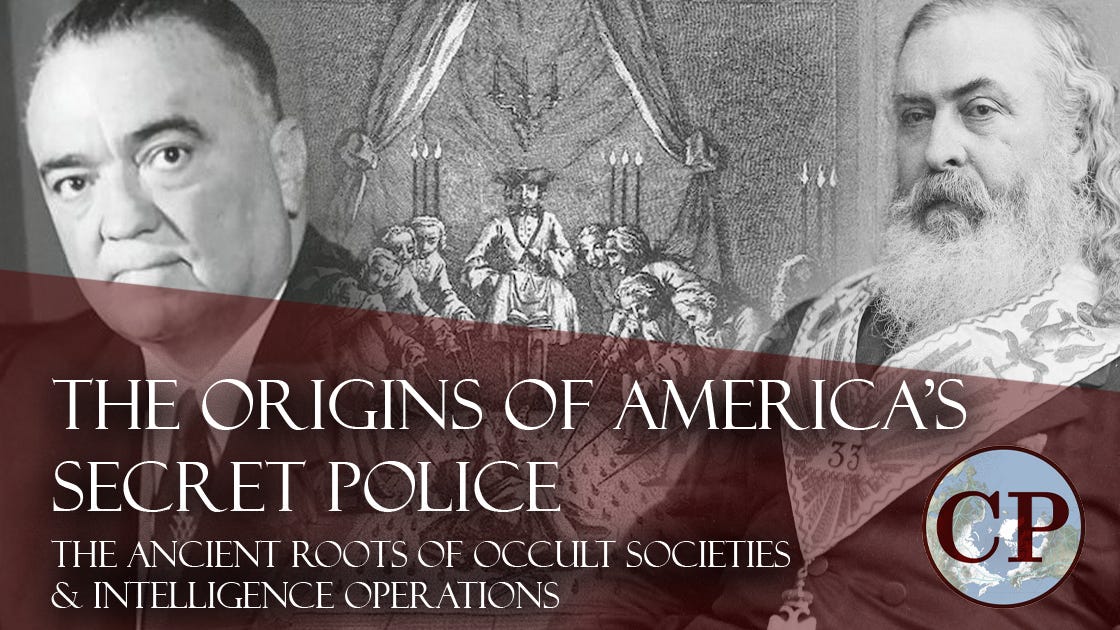 The Origins of America’s Secret Police: The Ancient Roots of Occult Societies and Intelligence Operations

Bitchute link in case YouTube takes the film down: https://www.bitchute.com/video/XRQFpzljKkk/

Narrated by Canadian Patriot Review historian Matthew Ehret, this film traces the the role of cults and secret societies in sustaining global oligarchies all the way back to the Cult of Apollo in ancient Rome.[1]

The film begins with the example of King Croesus of Lydia, whose kingdom was crushed after the Delphi oracle advised him to go to war against Persia.

Joining the Freemasons in 1920, FBI founder and 33 degree Scottish Rite Freemason, J Edgar Hoover was the second most revered member of the House of the Temple in Washington DC. Under his leadership, there was a masonic Fidelity Chapter within the FBI itself.

Historically the most revered Scottish Rite member was Confederate general Albert Pike, author of the groundbreaking Morals and Dogma of the Ancient and Accepted Scottish Rite (1872). The most troubling part of the film quotes extensively from Pike’s book about maintaining freemasonry “in the purity of Luciferian doctrine.” Pike refers to Lucifer as the true god and the god of “light and good.” He refers to Adonay (an Old Testament name for Yahweh) as the “god of evil,” claiming it’s the nature of all things to have a “light and dark” side.

The film traces the Hoover’s long political career, starting from his role in the 1917-1920 Red scare, in which he engaged in mass arrests and illegal deportations, as well as orchestrating government spies and provocateurs to instigate lynchings and other terrorist activities. In 1921, Hoover was appointed to the newly created Bureau of Investigation, which he transformed into the Federal Bureau of Investigation in 1935.

Serving under eight presidents and linked to numerous assassinations and unexplained deaths, Hoover’s powerful Masonic connections made him impossible to remove from power,

One of the first convenient deaths was that of Montana Senator Thomas J Walsh (1913-1933), selected by newly elected Franklyn D Roosevelt to run the Justice Department. In the Senate, Walsh had chaired a committee investigating illegal FBI activities. Walsh was allegedly poisoned by a woman he secretly married two weeks earlier.

Only days later, there was an assassination attempt on Roosevelt himself, in which Chicago’s mayor was killed.

The film also tells the story of Smedley Butler, the retired general approached by a cabal of Wall Street bankers to lead a fascist coup against FDR shortly after his 1933 inauguration. In 1934, the House on Unamerican Activities confirmed Butler’s evidence [3] after Hoover, who Butler approached first, declined to take any action.

It goes on to examine the case of Warren Commission member and House majority leader Hale Boggs. The latter’s plane disappeared in Alaska in 1972 after he asked Nixon’s Attorney John Mitchell to fire Hoover. Boggs had been concerned for some time about suppressed Warren Commission evidence that totally exonerated Lee Harvey Oswald as the alleged murdererer of John F Kennedy.[4]

[1] Although Ehret doesn’t mention it in this film, in other work he traces the origin of freemasonry to the same Roman oligarch families involved in the Cult of Apollo, who, following the fall of the Western Roman Empire, made the city-state of Venice (ie the Republic of Venice 697 – 1797) the most powerful political force of medieval Europe).

[2] Ehrrt also writes extensively about the role of British intelligence in supporting the Southern Confederacy and American Scottish Rite Freemasonry.

[3] Instead of prosecuting them, FDR chose to use the committee’s findings to pressure Wall Street to agree to his New Deal legislation.

[4] Including a negative nitrate test by the Dallas Police Department indicating he hadn’t fired a gun the day he was arrested.