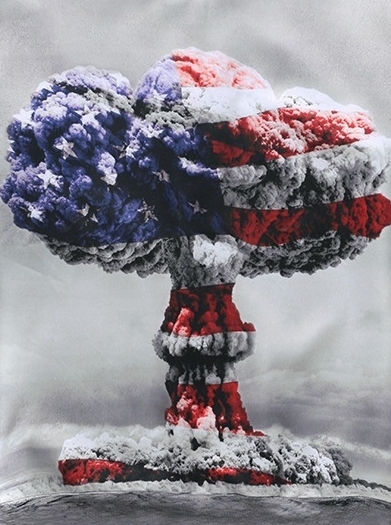 This phrase currently yields about 6,590,000 results on Google, so it must be real—or is it not? It is not. But apparently figures most authoritative have concocted a narrative where Putin, in desperation over the loss of Krasny Liman, a railroad junction in the Kramatorsk district of Donetsk People’s Republic, which as of yesterday is part of Russian Federation, will get all emotional and attack the Ukrainians using tactical nuclear weapons. Since this narrative is bogus, there must be something else going on, such as a false flag being planned by the US. Let’s tease this narrative apart and see where it leads.

If you have never heard of Krasny Liman, you are hereby forgiven for this bit of geographic ignorance. It is only notable for two things: a rail junction and the fact that the Russians recently decided to pull back from it while inflicting horrific losses on the attacking Ukrainians. As far as battlefield losses, the 10:1 ratio (10 dead Ukrainians for every dead Russian) seems to be holding steady.

Given that Russia’s population is 4 times larger and that Russia makes all of its own weapons while the Ukraine is forced to rely on the kindness of strangers, Russian victory on the battlefield is entirely assured. Krasny Liman and its majestic railway station will be retaken in due course, because it now happens to be on Russian territory, but there is no reason to rush. What’s happening now in Novorossiya (what the region was called when it was first settled by Russians, displacing wandering nomadic remnants of Genghis Khan’s empire) is an anti-terrorist operation, the Ukrainians and their Western supporters being the terrorists. The Russian troops are slowly grinding their way to victory, defined as liberating Novorossiya from the Ukrainian forces and foreign mercenaries, which are, since no war has ever been officially declared, illegal combatants—i.e., terrorists.

In case you wish to challenge these definitions, let’s add some perfectly boring legal facts. Novorossiya (currently including Donesk, Lugansk, Kherson and Zaporozhye, and eventually to include, at a minimum, Nikolaev, Odessa, Kharkov and Dnepropetrovsk) recently voted in a referendum on whether to join the Russian Federation. The numbers were overwhelmingly in favor.

A referendum is a legal instrument of direct democracy by which a people make their sovereign will known to the world, enshrined in Article 1 of the UN Charter as: “the principle of equal rights and self-determination of peoples.” This is international law; there is also a lot of he-said-she-said: the regime in Kiev claims that these regions are separatists; the would-be separatists rejoin that the Kiev regime is itself illegal, having been installed by Americans in an unconstitutional, violent coup d’état in 2014. But as far as Moscow is concerned Novorossiya is part of Russia because its people have so chosen while the Ukrainians and various mercenaries on its territory are terrorists to be exterminated or expelled.

You may wonder why such legalities are important here, given that shells are exploding and people are dying, and you may feel compelled to run around with your hair on fire in a futile attempt to make them stop. Well, good luck with that, but to the Russians questions of legality in international relations are of paramount importance.

Some 85% of the world’s population that is not part of the collective West sees Russia as a valuable deterrent against predatory, neo-colonialist Western practices (with its “rules-based international order” where nobody has ever seen, never mind ratified, this imaginary compendium of rules). Russia is eager to position itself as a trustworthy partner acting within a mutually acceptable legal framework. The success of international organizations such as SCO and BRICS, which many nations wish to join, testifies to the effectiveness of this approach. In contrast, the US is seen as an increasingly rudderless, internally conflicted renegade nation and the EU as a gaggle of its feckless minions.

These preliminaries out of the way, let us now consider the nature of “Putin’s nuclear threat.” The brilliant idea for concocting this false narrative came from Putin himself who, during his speech on the occasion of accepting Novorossiya into the Russian Federation, said this:

Translation: “I wish to remind those who allow themselves to make such statements in relation to Russia that our country also possesses various offensive weapons, certain components of which are more modern than those of NATO countries. And in case of threats to the territorial integrity of our country, for the defense of Russia and of our people, we will most definitely make use of all means in our possession.”

Putin did not explicitly mention nuclear weapons, although he did warn against nuclear blackmail and said, ominously, that “the wind rose can point in any direction,” implying that nuclear fallout can spread anywhere the wind blows.

And this was enough to send Western mass media into high dudgeon, causing it to hyperventilate continuously while spewing out an endless stream of verbiage on “Putin’s nuclear threat.” But it’s not a threat—it’s a promise, and for details one should look to Russia’s Nuclear Doctrine which spells out the exact conditions under which Russia’s nuclear deterrent will be employed: no first use, and to be used only in response to an existential threat. The temporary tactical retreat from Krasny Liman with its lovely railroad station is not an existential threat by any stretch of the imagination; that, plus the “no first use” stipulation in Russia’s nuclear doctrine, guarantee that Russia will not use a nuclear weapon in response.

If that’s the case, then what are we to read into “Putin’s nuclear threat” beyond an excuse to hyperventilate and rant about Russia-Russia-Russia, to distract from the now $31 trillion US federal debt and other looming disasters? The US has exhibited a pronounced penchant for false flags (9/11, where 3 skyscrapers—WTC 1, 2 and 7—were, if you are gullible, knocked down using 2 Boeings) and an equally pronounced penchant for using nuclear explosives for political ends (Hiroshima, Nagasaki, and then Fukushima, where a nuclear depth charge was used to trigger a tsunami that all but shut down Japan’s nuclear power industry). Perhaps the plan is to combine the two ingredients by nuking Kiev and then attempting to pin the blame on Russia. Given that the US just blew up Nord Stream pipelines with barely a reprimand, why wouldn’t it just keep its terrorist strikes coming?