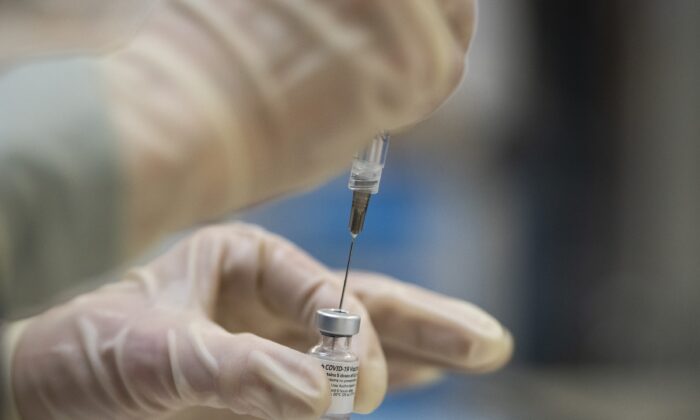 U.S. Food and Drug Administration (FDA) researchers are preparing to publish a study on a set of data that identified four potential issues in elderly persons after COVID-19 vaccination.

The agency has given zero updates on the matter since then, until Sept. 30, when a spokesperson said that a study on the surveillance is expected to be published soon.

“The medical record review and statistical analyses have recently been completed, and the overall study results are currently under internal review at FDA,” the spokesperson told The Epoch Times via email. “Release of the study findings is expected later this fall.”

The spokesperson did not respond to a request for more details.

Pfizer did not respond to a request for comment.

In 2021, the FDA said the four potential adverse events of interest were detected by analyzing the health care claims database for Medicare, the government insurance plan that covers people aged 65 and older.

The events were blood clotting in the lungs, insufficient oxygen to the heart, low blood platelet levels, and disseminated intravascular coagulation.

“These four events may not be true safety concerns, and the screening method cannot establish that the vaccine caused these AEI. FDA is sharing the initial findings of this safety study in the spirit of transparency but does not believe there is a cause for concern. There are alternative explanations for the findings, including the fact that the Pfizer/BioNTech vaccine was given to many high-risk individuals who were older and had significant co-morbidities,” the FDA said at the time.

“FDA continues to closely monitor the safety of the COVID-19 vaccines and will further investigate these findings by conducting more rigorous epidemiological studies. FDA will share further updates and information with the public as they become available,” it also said.

The adverse events were not identified for recipients of the other two vaccines available at the time, nor were they identified in two other surveillance systems.

FDA Has Warned of Adverse Events

Adverse events are negative health issues that aren’t necessarily linked to a vaccine. The vaccinated groups in the clinical trials for the vaccines had higher numbers of certain adverse events, including Bell’s palsy in Pfizer’s trial, but the FDA said the trials did not reveal safety concerns, citing the background rate of Bell’s palsy in the general population and other factors. Researchers have since identified a higher rate of serious adverse events in the vaccinated arms than the unvaccinated arms.

The FDA did say that post-trial administration of the vaccines in large numbers of people “may reveal additional, potentially less frequent and/or more serious adverse events not detected in the” trials, and in the months following authorization, the FDA added warnings for adverse events to all of the available vaccines.

People set to receive the Pfizer, Moderna, Johnson & Johnson, and Novavax vaccines are told in FDA fact sheets that they could experience a severe allergic reaction. Myocarditis and pericarditis, two forms of heart inflammation, are possible after receipt of the Pfizer, Moderna, and Novavax. Evidence accumulated after the trials shows a causal link between heart inflammation and the Pfizer and Moderna vaccines, U.S. health officials have said.

Other side effects that have been reported after receipt of one or more of the vaccines include swollen lymph nodes, skin tingling, blood clots, and diarrhea.

The FDA and other health agencies maintain that the benefits of the vaccines outweigh the risks, a position challenged by many health experts.