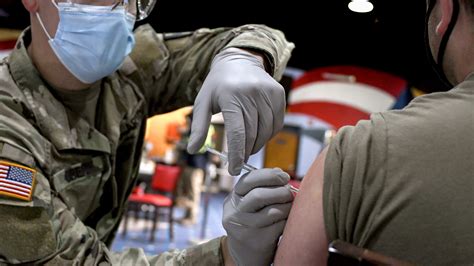 By Jonathan Snyder
Stars and Stripes

Lance Cpl. Catherine Arnett, 24, of Fort Worth, Texas, was charged with two counts under article 87 of the Uniform Code of Military Justice, missing troop movements on May 27 and May 14, and one count under article 92, disobeying a direct order on May 7.

Arnett was not charged with refusing the vaccine, 1st Marine Aircraft Wing spokesman Maj. Rob Martins told Stars and Stripes in July. The court-martial came from her refusal “to board multiple flights to complete the separation process which occurred after she refused the COVID-19-vaccine,” he wrote.

Arnett said she would not board those flights because the orders stemmed from the 2021 Defense Department mandate on COVID-19 vaccination, which she considers unlawful.

Her court-martial was placed on an indefinite delay on Aug. 22 after her lawyer cited a federal judge’s Aug. 18 order that temporarily bars the Corps from punishing or discharging Marines who refused the vaccine on religious grounds.

A status hearing for Arnett’s case was scheduled for Tuesday, but the aircraft wing’s commander, Maj. Gen. Eric Austin, decided on Wednesday to dismiss it.

“In weighing the considerations for both the Marine Corps and the Marine, within the context of the most recent injunction for COVID-19 vaccine refusal cases, the commanding general has decided to dismiss [Arnett’s] COVID-19 related charges,” Martins, the wing spokesman, said in an email Monday.

Arnett was unavailable to comment on the dismissal on Tuesday.

The Marine said she refused the COVID-19 vaccines because they are tested or produced using stem cell lines that descend from fetuses aborted in the 1970s and ’80s. Her request as a Catholic for a religious exemption, she said, was denied by the Marine Corps and again on appeal.