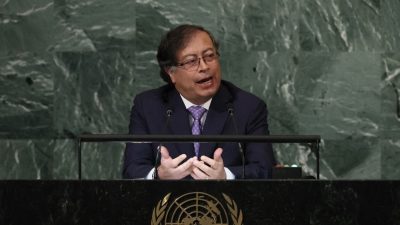 On the first day of the United Nations General Assembly, Colombian President Gustavo Petro made his first address to the body. The speech sharply deviated from those of his conservative predecessors. Petro did not shy away from calling out global North countries for their role in the destruction of the environment and in the perpetuation of the War on Drugs, as a symptom of their capitalist greed. He accused

“You are only interested in my country to spray poisons on our jungles, to take our men to jail and put our women in exclusion. You are not interested in the education of the child, but in killing the jungle and extracting coal and oil from its entrails. The sponge that absorbs the poison [the rainforest] is useless, they prefer to throw more poisons into the atmosphere.”

This is Petro’s first trip to the United States since he was inaugurated in August. He was received on Sunday night September 18 by hundreds of supporters in Queens, NY who manifested their support to his administration’s commitment to working for peace and ensuring the wellbeing of the Colombian people.

Below is a full transcription of his speech on September 20, 2022 to the United Nations General Assembly.

I come from one of the three most beautiful countries on Earth.

There is an explosion of life there. Thousands of multicolored species in the seas, in the skies, in the lands…I come from the land of yellow butterflies and magic. There in the mountains and valleys of all greens, not only do the abundant waters flow down, but also the torrents of blood. I come from a land of bloody beauty.

My country is not only beautiful, it is also violent.

How can beauty be conjugated with death, how can the biodiversity of life erupt with the dances of death and horror? Who is guilty of breaking the enchantment with terror? Who or what is responsible for drowning life in the routine decisions of wealth and interest? Who is leading us to destruction as a nation and as a people?

My country is beautiful because it has the Amazon jungle, the ChocóWar  jungle, the waters, the Andes mountain ranges, and the oceans. There, in those forests, planetary oxygen is emanated and atmospheric CO2 is absorbed. One of these CO2 absorbing plants, among millions of species, is one of the most persecuted on earth. At any cost, its destruction is sought: it is an Amazonian plant, the coca plant, sacred plant of the Incas. [It is in] a paradoxical crossroads.

The jungle that tries to save us, is at the same time, destroyed. To destroy the coca plant, they spray poisons, glyphosate in mass that runs through the waters, they arrest its growers and imprison them. For destroying or possessing the coca leaf, one million Latin Americans are killed and two million Afro-Americans are imprisoned in North America. Destroy the plant that kills, they shout from the North, but the plant is but one more of the millions that perish when they unleash the fire on the jungle. Destroying the jungle, the Amazon, has become the slogan followed by States and businessmen. The cry of scientists baptizing the rainforest as one of the great climatic pillars is unimportant.

For the world’s power relations, the jungle and its inhabitants are to blame for the plague that plagues them. The power relations are plagued by the addiction to money, to perpetuate themselves, to oil, to cocaine and to the hardest drugs to be able to anesthetize themselves more. Nothing is more hypocritical than the discourse to save the rainforest. The jungle is burning, gentlemen, while you make war and play with it. The rainforest, the climatic pillar of the world, disappears with all its life.