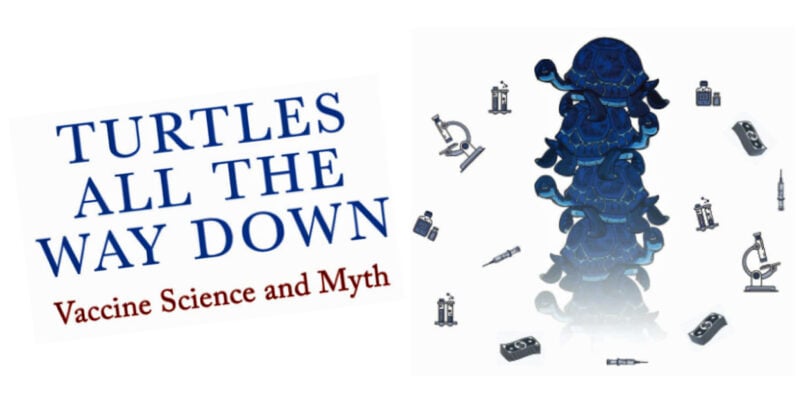 Whether you are a healthcare professional, a parent of a young child or someone who wishes to productively engage in the vaccine debate sweeping the world today, this book is a must-read.

In 2019, a remarkable book, “Turtles All The Way Down: Vaccine Science and Myth,” was published in Israel. The book, originally written in Hebrew, is a comprehensive examination of the evidence behind the assertion that vaccines are safe and effective.

Though it might easily have been lost to obscurity, the book gained initial acclaim when the leading medical journal in Israel, Harefuah (“Medicine”), gave it a positive review.

Writing in the September 2019 issue of Harefuah, two senior academic criminologists, Nati Ronel and Eti Elisha, “found the book to be well-written, serious, scientific and important” offering “a comprehensive view of the issue.”

“Turtles All The Way Down: Vaccine Science and Myth” became the first book critical of vaccines to have ever received a positive review from a mainstream medical journal.

Criticism of Ronel and Elisha came quickly from the medical establishment, but as Mary Holland, editor of the book and Children’s Health Defense president and general counsel states in the book’s foreword:

“Their appraisal of the book still stands today, unscathed: in the three years since its (Hebrew) publication, no medical or medical science professional has succeeded in refuting the book’s claims.”

The reason the information offered in the book has yet to be refuted is simple. The book’s 1,200+ citations reference only mainstream scientific journals and health agencies like the Centers for Disease Control and Prevention (CDC), the U.S. Food and Drug Administration (FDA) and the World Health Organization.

The book was recently published in English and has been available since July 2022.

If you wish to productively engage in the vaccine debate that is sweeping the world today, this book is a must-read.

Had “Turtles All The Way Down” received its deserved attention from the international medical community when it was written one year prior to the COVID-19 pandemic, the world may very well have avoided the predicament that we are in today.

Nevertheless, the book is still relevant. Rather than enumerating the obvious failures of the current COVID-19 vaccine campaigns, “Turtles All The Way Down” instead offers a compelling explanation of why we should have predicted the vaccines’ failure from their inception — but didn’t.

I am a doctor and have trained at some of the finest institutions in the U.S. Yet I didn’t know much about mRNA technology or vaccines in general in the summer of 2020.

In other words, I was like most doctors. We knew how vaccines worked in principle and we had, at one point in our education, memorized the recommended vaccination schedule for children.

When the CDC announced that the Pfizer formulation met and exceeded minimum efficacy requirements for Emergency Use Authorization, I witnessed our nation breathe a sigh of relief.

I also witnessed colleagues gleefully planning their visits to vaccination clinics to receive this gift of modern medicine.

None of my colleagues were interested in the results of the trial. Nor were they curious enough to know why our health authorities were so confident in their assessment.

When the results of Pfizer’s multicenter trial of its BNT162b2 mRNA vaccine were published in the New England Journal of Medicine (NEJM), it was obvious that there were more questions than answers, at least to the discerning amongst us.

According to the NEJM, yes, the trial data indicated that the “vaccine” had a calculated efficacy of 90% in preventing severe disease — but that was only for a matter of weeks and only if measured from the point of maximum efficacy (two weeks after the second dose).

Moreover, only 10 participants out of approximately 40,000 got severe COVID-19 (nine of whom received the placebo). That meant about 2,500 people had to be vaccinated to prevent a single case of severe COVID-19.

Six of every 1,000 recipients were deemed to have had a reaction that was an imminent threat to their life or limb, needed hospitalization or surgical intervention and/or ended up with a permanent disability.

Why would the public accept a treatment that would result in 15 serious adverse events for every case of severe COVID-19 it prevented?

And what about all of the suspicious withdrawals from the trials? Why did 5 times more vaccine recipients get pulled out of the trial within seven days of getting the second dose compared to those who got the placebo?

What happened to these 311 volunteers and why were they excluded from the trial soon after getting the second dose (VRBPAC Memorandum, Table 2)?

Surely the FDA would ask some hard questions. But it didn’t. Neither did anyone else I knew. Not my friends, my neighbors nor my fellow physicians.

Why on Earth wasn’t anyone asking any questions??

The explanation is rooted in unquestioned beliefs deeply held by our society regarding Western medicine and its apparent winning record against diseases that have historically exacted devastating tolls on our species.

The COVID-19 vaccines were presumed to be an enormous success because vaccines have been regarded by many as the best contribution of modern medicine to humanity. Vaccines have a powerful mystique. They don’t cure illness, they prevent it. They keep us healthy!

And we know they work because such things like polio don’t exist anymore (at least not around here anyway). They are obviously safe, otherwise we wouldn’t be injecting them into human beings from the time they are only a few hours old (Hep B), would we?

6 thoughts on “Why, After 7 Decades, Don’t We Have Proof that Vaccines Provide More Benefit than Risk?”