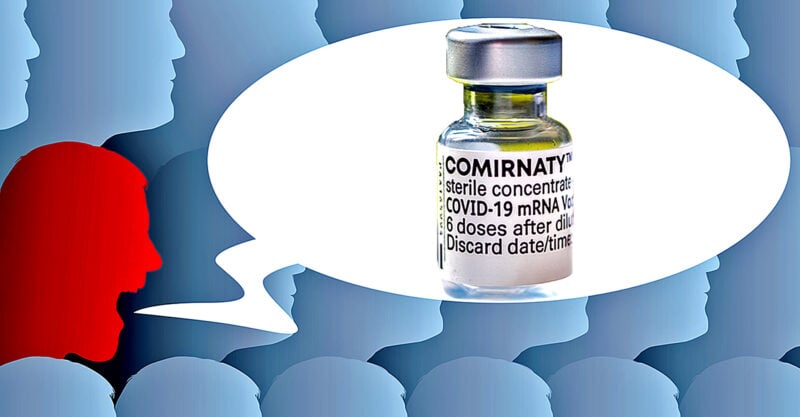 Two whistleblowers — a member of the U.S. Coast Guard and the wife of a 19-year veteran at the Fort Detrick, Maryland, military base — allege the military is using fully licensed Pfizer “Comirnaty” vaccines manufactured at a facility in France that is not approved by the U.S. Food and Drug Administration.

Lt. Chad R. Coppin, in a July 30 declaration submitted with Sen. Ron Johnson (R-Wis.) under penalty of perjury, detailed his personal investigation into the availability and origin of Comirnaty-labeled COVID-19 vaccine vials at U.S. military facilities.

Coppin also relayed his concerns in an interview with The Defender, as did Holly Freincle, the wife of a U.S. military service member stationed at Fort Detrick, Maryland, who corroborated Coppin’s claims that Comirnaty-labeled vaccine vials are appearing at military service facilities.

Freincle told The Defender Comirnaty-labeled vaccines are being administered at Fort Detrick and that her husband’s retirement is currently in jeopardy if he does not accept vaccination with this “FDA-approved” vaccine.

Until now, the DOD has claimed the Pfizer-BioNTech COVID-19 vaccine, administered under an FDA-issued Emergency Use Authorization (EUA), is “interchangeable” with the fully licensed Pfizer Comirnaty vaccine — which until recently, was said to be unavailable at military facilities.

That’s partly because FDA regulations prohibit the mandatory administration of EUA products, despite the DOD’s claim that Pfizer’s EUA vaccine can be mandated because it’s “interchangeable” with Comirnaty.

In November 2021, a federal judge determined, as part of a broader order involving a military vaccine mandate lawsuit, that the Pfizer-BioNTech and Pfizer Comirnaty vaccines are not “interchangeable.”

In his July 30 declaration, Coppin, who has served with the USCG since March 2002, reported that after a long period of unavailability, the “Comirnaty” vaccine began to appear at U.S. military facilities in June.

This included the Juneau, Alaska, USCG medical clinic where Coppin is stationed and where “a shipment of 60 Comirnaty vials packaged in six boxes of ten vials” was delivered on June 10.

According to Coppin, “prior to this date, only emergency use authorization shots have been available” at the Juneau facility and other military installations.

“I found [the delivery of Comirnaty-labeled vials] interesting as they arrived unannounced to any service members and to date, FDA approved Comirnaty labeled vials had never been seen in the USA,” he wrote in his declaration.

This, along with a sense of duty, led Coppin to investigate the matter further and eventually come out as a whistleblower.

“As a commissioned officer in the United States Coast Guard, it is my responsibility to uphold the Coast Guard’s core values of Honor, Respect, and Devotion to Duty.

“It is for this reason that I present … information that brings into question the ability of the Department of Defense (DoD) and the Department of Homeland Security (DHS) to continue to push the lawful order of making service members partake in the injection of the ‘Comirnaty labeled’ COVID-19 shots that recently appeared at select military installations across the country.”

Medical staff at the Juneau facility told Coppin the Comirnaty-labeled vials were shipped there from the U.S. Army installation at Fort Detrick, Maryland.

In a subsequent phone call to the Maryland facility, Coppin alleged a U.S. Army civilian contractor told him the Comirnaty “grey cap” vials were “sent to Ft. Detrick from the Kalamazoo, MI Pfizer plant.”

Upon inquiring for information about where the Comirnaty-labeled vials were manufactured, he was told that he “would have to call Pfizer at Kalamazoo, MI for any additional information.”

In a July 7 phone call with a Pfizer customer service representative, Coppin said he was informed the Comirnaty-labeled vaccines with lot number FW 1331 that were shipped to the Juneau facility were “manufactured in France” on Jan. 28, 2022, and had an expiration date of Dec. 31, 2022.

However, he was provided “no other specific information regarding what Pfizer location, city or address in France” the vaccine was produced in.

The phone call between Coppin and Pfizer’s customer service representative was recorded and made publicly available as part of a podcast hosted by Dr. Samuel Sigoloff, a doctor who granted medical exemptions to the military’s COVID-19 vaccine mandate and who subsequently was ordered not to discuss COVID-19 or see patients.

This is significant, Coppin said, because “we are being told that our military medical clinics at select locations across the country have the FDA approved Comirnaty” and that “Pfizer has stated on this recorded phone call that Lot number FW 1331 was manufactured in France which makes this not an FDA approved version for distribution in the United States of America according to the approved manufacturing locations declared in its BLA license.”

“Commanding Officers are using this shipment of Comirnaty from Ft. Detrick to try and convince and coerce the remaining unvaccinated service members into compliance with their order to receive a fully FDA approved Covid-19 vaccine,” Coppin alleged.

Freincle corroborated Coppin’s claims that Comirnaty-labeled vaccine vials are appearing at military service facilities and that unvaccinated service members are being pressured to get vaccinated with it.

She said her husband’s retirement, after 19 years of service, is now in jeopardy unless he receives the “Comirnaty” vaccine.