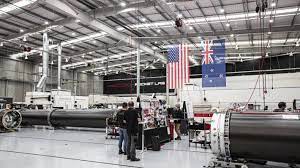 Some in space industry bewildered by Australia’s lack of fanfare about the launch of the satellites, which will be used to collect intelligence for allied nations

A second spy satellite built by Australia and the United States is scheduled for liftoff on Tuesday from a launch site in New Zealand.

The first of the two satellites, which will be used to collect intelligence for the allied nations, launched two weeks ago.

The Australian Department of Defence did not announce the successful launch of the first satellite or the launch date of the second.

US spy agency, the National Reconnaissance Office, has been celebrating the “Antipodean Adventure”, which features a crocodile, a rocket and an eagle on its logo.

Some in the space industry are bewildered by the lack of information and fanfare on the Australian side.

“It’s not just these particular satellites, it’s an attitude within Defence that they’re very closed off,” he said.

“The Americans are very forward. You only need to look at how they support movies like Top Gun: Maverick. It’s a very different culture, and it’s a frustrating one down here.”

New Zealand’s Rocket Lab is providing the rockets to deliver the classified payloads into orbit from the launch site on the Māhia Peninsula.https://interactive.guim.co.uk/maps/embed/aug/2022-08-01T01:42:57.html