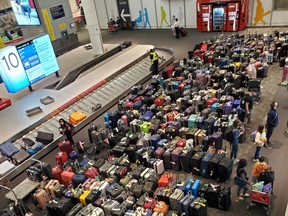 Food production and the fossil fuel industries are not the only ones on the globalists’ chopping block. Last weekend I was invited to a zoom call with the German firebrand MEP Christine Anderson who gave us a brief report about the recent vote in the EU parliament to extend the Covid pass requirement for another year.

The parliament voted in favor of the extension in plenary session in spite of the fact that the measure is wholly useless and unjustified – to say nothing of the fact that 99% of Europeans are opposed to it. Mrs. Anderson’s explicit assessment on the matter was that EU’s democracy is a sham and a fraud. The plenary never debated the measure – they simply took the vote. Why the majority of MEPs voted in favor is entirely a mystery, and a sinister one at that.

But perhaps the most interesting and unexpected part of the 3 hour long call was about the airline industry. Three of the participants on the call had deep inside knowledge of the airline industry (one of them a pilot) who said in no uncertain terms that the industry is now being systematically and deliberately demolished. Apparently, the ultimate purpose is to kill airline travel altogether. The three participants asked that their names not be used, but they seemed exceptionally well informed and entirely credible. At any rate, the news flow has pretty well corroborated their claims.

It is quite apparent that something IS going on with air travel – a sudden wave of dysfunction, like we are experiencing in energy industry, oil production, supply chains and health care. Perhaps I missed a few. And while the media has reported chaos at many airports around the world (pretty much everywhere, it seems), the explanations seem innocent enough: the airports are understaffed and can’t cope with sudden surge of travellers. Here’s a small sampling of the recent reports:

All of a sudden, we have thousands of flights cancelled or delayed, luggage handling process stalling, hours’ wasted in check-in and security checks, and all this happening pretty much everywhere? Coincidence theorists will swallow the official explanations with a shrug of acceptance, but I do find all this extremely strange.

The traffic management systems that have evolved for nearly a century and that had  functioned close to flawlessly for decades, now suddenly seem to be coming apart at the seams. If what the gentlemen on our zoom call were saying was true, airport chaos could become a chronic thing. Indeed, another person on the call, who said she’d read through many of the WEF documents and all of UN’s Agenda 2020/30/50/etc. said that this is all actually written down as an explicit objective. She said that the ultimate intent is to do away with travelling and to establish a feudal arrangement where people remain fixed in place and all travel is banned.

Of course, we don’t need to make too much out of such documents – they simply reflect someone’s stated vision of the kind of social arrangement they believe desirable for whatever reason. On the other hand, the price of liberty is eternal vigilance, and by this time, the least we should do is pay attention. The coincidence theorists in our midst, the ever loyal consumers of the mainstream narrative are always happy to disperse when told to do so because “there’s nothing to see here…” However, this cohort has had an extremely poor prediction track record, especially over the last two+ years. For most of the rest of us, it is indeed time to pay very close attention and seed the system with due friction if it is veering toward undesirable ends. This is our future that’s at stake and the world our children and their children will inherit. It is time to be brave.

While the high priests of Davos may not be able to carry out their plans to completion, they have proven powerful enough to cause a great deal of damage.

5 thoughts on “The Coming Collapse of the Air Travel Industry”