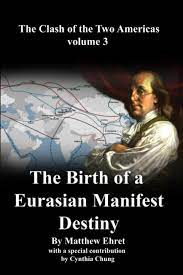 The Clash of the Two Americas Volume 3: The Birth of a Eurasian Manifest Destiny

Another great read on a very complex topic.

About half of Volume 3 focuses on hidden history and about half on the Russian-Chinese collaboration to build a global economy based on on peaceful coexistence, nternational cooperation and economic and technological development.

About half the book concerns the role of China and Russia in building the Belt and Road Initiative (BRI) and the International North-South Transit Corridor linking China, India, Pakistan, Iran, Russia, Central Asia and the Middle East in a massive trade and energy sharing network. According to Ehert, all the Arab countries (including Syria) except Saudi Arabia, Qatar and the UAE have joined one or both of these networks.

The only chapters of the book I found problematic were those unconditionally  championing Russia and China’s embrace of nuclear energy. Ehret and Chung’s assertions about nuclear energy being a carbon neutral and totally safe alternative to fossil fuels provide an extremely one sided view of an extremely controversial topic. There’s strong evidence showing nuclear power plants produce far more carbon emissions during their construction (especially for concrete and steel) than either solar panels or wind turbines and emissions continue to be produced as the uranium used to fuel them is processed. See  Fact Check: Is Nuclear Energy Good for the Climate

The authors also assert that the Russians and Chinese have eliminated the toxic nuclear waste problem by 1) reprocessing nuclear waste so it can be reused instead of stored, 2) by replacing uranium-fueled reactors with those fueled by thorium and fusion technology. This directly contradicts the views of the physicists who run the Union of Atomic Scientists.

See The History of Nuclear Power’s Imagined Future: Plutonium’s Journey From Asset to Waste,  Fact Check: Five Claims About Thorium Waste Made by Andrew Yang (which talks about thorium waste being even more dangerous than conventional nuclear waste) and Fusion Reactors: Not What They’re Cracked up to Be.

[1] The Thirty Years War, essentially a religious war between Catholics and Protestants, began as a civil war between German statelets belonging to the Holy Roman Empire and eventually drew in nearly all of western Europe (reducing the population of Germany by one-third). The Peace of Westphalia outlined (for the first time in western society) the five principles of peaceful coexistence eventually adopted by the Non-Aligned Movement. Founded in 1954, the NAM consisted of 120 countries not formally aligned with any major power block.

[3] The chapter on the Khazarian Empire describes its founding in the late 6th century, by Turks who subsequently converted to Judaism, owing to their close relationship with Jewish bankers and traders who ran that section of the Silk Road. Ehert disputes David Ickes’s claims about a so-called Khazarian mafia that alleged replaced the Semitic Jews in Israel.

[4] The inventor (and US spy) Samuel Morse first wrote about this in his 1841 book Foreign Conspiracy Against the Liberties of the United States.