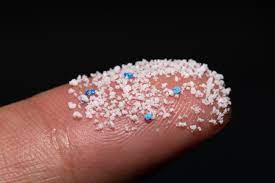 This article was previously published May 2, 2018, and has been updated with new information.

Discarded plastic — both large and microscopic — circles the globe, choking our oceans and harming wildlife, ultimately finding its way onto your plate and into your body, where it can accumulate over time. A number of studies have now revealed we are both eating and drinking microplastic particles.

For example, one-third of the fish caught in the English Channel contain microbeads, as do 83% of scampi sold in the U.K.1 Except for Himalayan, most sea salt also contains plastic fragments.2

What the consequences might be are still largely unknown, but it’s unlikely to be entirely harmless, considering plastic may not be thoroughly eliminated from your body and cannot degrade inside your system. Many of the chemicals used in the manufacture of plastics are also known to disrupt embryonic development, dysregulate hormones and gene expression, cause organ damage, and have been linked to obesity, heart disease and cancer.

Plastic — A Most Harmful Convenience

Microfibers5 from clothing pose a serious threat to marine life and migrate into fields and onto our plates. These plastic fibers are released most readily during washing, to the tune of 1 million tons a year, and the irregular shape of these plastic particles renders them more difficult for marine life to excrete than other microplastics.

Microbeads, the tiny plastic pellets found in body washes, facial scrubs and toothpaste, also wreak havoc, traveling right through wastewater treatment plants, clogging waterways and filling the bellies of sea animals with plastic that acts as a sponge for other toxins.

According to a Cosmetics Europe report,6 an estimated 4,360 tons of microbeads were used in personal care products sold in the European Union in 2012, all of which were flushed down the drain.

One 2015 study7 estimated there may be as much as 236,000 tons of microbeads filling the water columns of our oceans. Whether you look at environmental or biological effects, our careless use of plastics really needs immediate attention and revision. After that study came out, the U.S. Congress enacted the Microbead-Free Waters Act of 2015, banning products with microbeads as of July 1, 2019.8

A report by the U.K. Government Office for Science warns plastic debris littering the world’s oceans — 70% of which does not biodegrade — is likely to triple by 2025 unless radical steps are taken to curb pollution.9 At the rate we’re going, estimates suggest that by 2050, our oceans will contain more plastic than fish by weight.10 Already, in some ocean waters plastic exceeds plankton by a factor of 6-to-1.11

With this much plastic debris polluting our ecosystem — and our homes — is it any wonder researchers are now finding humans are ingesting plastic particles on a regular basis? By placing Petri dishes with sticky dust traps next to the plates at dinner time, a team of researchers from Heriot-Watt University were able to capture up to 14 pieces of plastic at the end of each meal. The source? Household dust.

According to this study, the average person swallows an estimated 68,415 plastic fibers each year just from the dust landing on their plates during meals. The same team also concluded the average person ingests about 100 plastic particles each year from shell fish — remnants of microplastic water pollution.

Senior author Ted Henry, professor of environmental toxicology at Heriot-Watt University, commented on the findings,15 “These results may be surprising to some people who may expect the plastic fibers in seafood to be higher than those in household dust. We do not know where these fibers come from, but it is likely to be inside the home and the wider environment.”

According to Julian Kirby, lead campaigner against plastics at Friends of the Earth in England, Wales and Northern Ireland:16

“Plastic microfibers found in the dust in our homes and the air we breathe can come from car tires, carpets and soft furnishings, as well as clothes such as fleece jackets. These are regularly shedding tiny bits of plastic into the environment as they are worn away.”