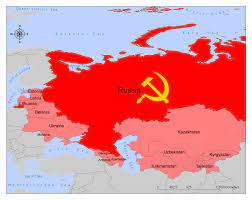 By Guilherme Wilbert for the Saker Blog

One of the great post-World War II myths, which is repeated like a mantra by starched college students with a syndrome of embracing all the causes of the world, is that the Soviet Union was built on the strength of the people and remained so during the years when it was a de facto country, but this could not be further from reality. Nothing could be further from the truth than that.  What happens is that the Soviet Union was a great political-economic power project of a small international clan that had a certain fondness for the idea of dominating a country, especially one that was in tatters like Tsarist Russia.

It all begins, really, with Jacob Schiff, an international banker born in Frankfurt, Germany, in 1847 and who migrated to the United States when the American Civil War ended. There he joined the Kuhn & Loeb Co. and gradually worked his way into what would be known as the “Schiff Era.  He became a director of the City Bank of New York, Wells Fargo and more. He was an ace with business.

In 1904 in New York when Jacob Schiff’s firm Kuhn & Loeb Company raises funds to make a loan to Japan, which would be used in the Russo-Japanese War against Tsarist Russia. Jacob did not support Tsarist Russia, in fact, all the people I will mention here did not even support the idea of Russia continuing along the lines of the Romanov Family.

So Schiff met with Takahashi Korekiyo, who was the Finance Minister of Japan during the Russo-Japanese War, and this was the bridge for his $200 million (equivalent to billions in 2016!) loan. He really spared no effort to finance the war that would be the beginning of the Russian downfall. It was simply half of what Japan had to use for the war. I mean, Japan was not doing well at that time either. But what could have been the reason for such generosity from Schiff? Well, not much is understood to this day, but some historians believe that because he dealt a lot with anti-Semitism at the time, he saw this loan as a kind of response to what Russia had been doing to the Jews in the Kishinev Pogrom, which today is Chișinău, Moldova. As well as thinking that gold at that time wasn’t worth much compared to the Japanese national effort to win a war.

Well, Japan won the war, the Treaty of Portsmouth is signed, and it is believed that it all happened thanks to the generous loan, since it was made possible for the country to buy more weapons with the borrowed money, and Schiff made his name. His and the Jewish people’s.

This loan had serious international consequences, since it became evident at that time how powerful the Jewish people (at least the bankers) were, and then, the 1903 writing, called the Protocols of the Elders of Zion, came to light, showing that there was not only nonsense written in this book, but much that really happened and was witnessed at that time.

Jacob Schiff received from Japan the Order of the Sacred Treasure; and in 1907, the Order of the Rising Sun, the Gold and Silver Star, the second highest of the eight classes of that Order. Schiff was the first foreigner to receive the Order personally from Emperor Meiji at the Imperial Palace. Finally, the Japanese knew how to thank the German who helped them at that moment.

At this moment we are witnessing the Japanese victory in the Russo-Japanese War through a loan making it possible to buy more weapons to fight the Russians, here, it is 1905.
September 5, 1905 to be exact.

Jacob Schiff, knowing that the First World War had started, asked the President of the United States at the time, Woodrow Wilson, to try to stop the war as soon as possible, since his family was still in Germany, and would actively participate in the First World War. And so, another loan.

Schiff ended up lending money to France for “humanitarian causes”.

The banker made sure that none of his money went to Imperial Russia, the country did not even receive any help from the international banker during the Tsarist era. And it is obvious that the country was already in a bad way, in fact, the Russian people’s feeling towards the Tsar was not the best, but nobody had even considered assassinating what would be the last Emperor of Russia, King of Poland and Grand Duke of Finland, Nicholas II.

During the Romanov Empire in Russia, most of the Bolsheviks (who would be known as such years after the Tsarist regime fell) were exiled from Russia for criminal-political reasons and ended up going to countries satellite to Russia. Names like Kaganovich, Yagoda, Beria, Kamenev, Stalin, Yezhov, Lenin, Trotsky, Bukharin, Sverdlov, Rykov, Zinoviev, Molotov, Emakov, and more, who would come to help consolidate what would be known as the Soviet Union were in exile for crimes they committed in Nicholas II’s Russia.

It was 1918, the First War was over, and along with it came the year of the assassination of the Romanov Family, a dark year for Russia, which would lose its last emperor to the Bolshevik faction that would take power a few years later.

Well, it was not only Jacob Schiff who sympathized with the idea of ending Czarist Russia, Swedish air began to blow inside New York and Olof Aschberg, who had allegedly made a loan to Germany during World War I, which was bad for his image and forced him to change the name of his bank, which would be known as Svensk Ekonomiebolaget, also showed interest in overthrowing the Czar and setting up a new Russia, along Communist lines.

So there you have a sneaky history of the biggest and first communist empire after the fall of Romanov dynasty. Many are the sources.

9 thoughts on “Paradoxically, the Soviet Union, the ultimate symbol of communism, was created by international bankers”