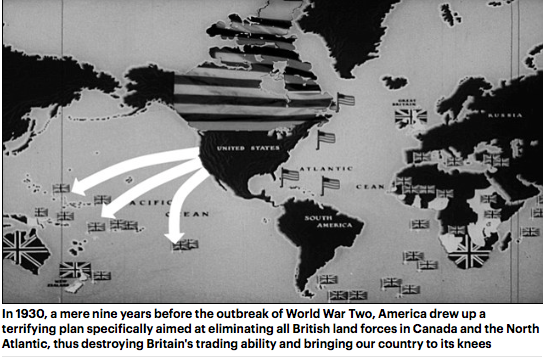 “In 1934, War Plan Red was amended to authorize the immediate first use of poison gas against Canadians and to use strategic bombing to destroy Halifax if it could not be captured.”

First approved in 1930, Joint Army and Navy Basic War Plan – Red was drawn up to defend the United States in the event of war with Britain.

It was one of a series of such contingency plans produced in the late 1920s. Canada, identified as Crimson, would be invaded to prevent the Britons from using it as a staging ground to attack the United States. (Globe and Mail, December 31, 2005, emphasis added)

The war plan directed against Canada initially formulated in 1924 was entitled “Joint Army and Navy Basic War Plan — Red”. It was approved by the US War Department under the presidency of Herbert Hoover in 1930. It was updated in 1934 and 1935 during the presidency of Franklin D. Roosevelt. It was withdrawn in 1939 (but not abolished) following the outbreak of the Second World War.

“Though ostensibly for war against Britain Plan RED is almost devoid of plans to fight the British. The Plan is focused on the conquest of Canada, which was color- coded CRIMSON. The U.S. Army’s mission, written in capital letters, was “ULTIMATELY, TO GAIN COMPLETE CONTROL OF CRIMSON.” The 1924 draft declared that U.S. “intentions are to hold in perpetuity all CRIMSON and RED territory gained… The Dominion government [of Canada] will be abolished.”

The strategic bombing of Halifax, Montreal and Quebec City were envisaged under Plan RED. Moreover, the US Army had been instructed (in capital letters),

In a bitter irony, General Douglas MacArthur who led US forces in The Pacific during World War II, not to mention the conduct of the carpet bombing raids against North Korea (1950-1953) was actively involved in the planning of war directed against Canada.